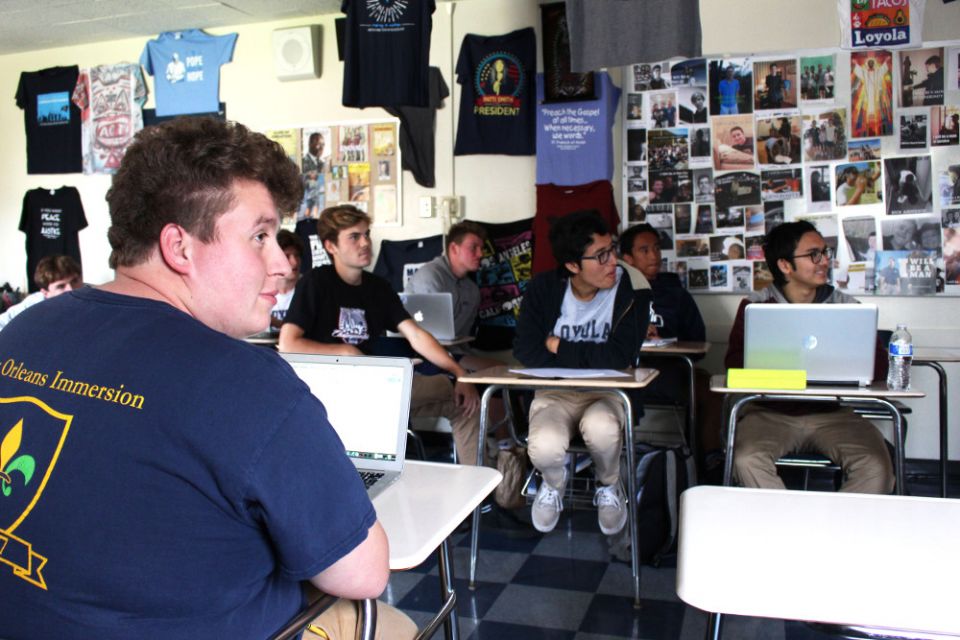 Los Angeles — As students at Loyola High School of Los Angeles joined thousands of others in protest on April 20 for the National School Walkout, they were using tools learned in class to help make a national statement.

Tom Cendejas, a teacher at the Jesuit preparatory school, said he helped students prep and plan for the walkout by encouraging them to think about strategies learned in his Catholic peace studies class.

But it wasn't just about the students: Cendejas, who has been teaching Catholic social justice classes for about 35 years, also prepared the faculty, giving his fellow teachers tips on how to talk with students about these issues.

"It's what I've been teaching for," Cendejas said.

The Catholic peace studies class breaks out the peacemaking and nonviolence lessons from his larger social justice classes, which allows interested students to dive deeper into where the intersection of religion and advocacy lives.

Cendejas and his students talk about people as varied as David Hogg and Emma González, Parkland shooting survivors; the Rev. Martin Luther King Jr.; and Diane Nash — sometimes even comparing them all.

"We take advantage of what's going on in the news today, so that means every semester is a little different," Cendejas said. "We're getting a lot of examples in our society today."

One of the biggest examples this year was from fellow high school students in Parkland, Florida.

Cendejas said his students studied the protests and marches that followed the mass shooting and also immersed themselves in coverage of the dialogue about gun safety versus gun rights. He said with the accessibility of podcasts and other online resources, the class has been able to go deeper than ever before in its discourse — and in his students' planning of how they can make an impact.

Cendejas then relates the study of these peaceful protests back to Catholicism. One of the biggest lessons, he said, is talking about what Jesus really meant by "turning the other cheek."

"When you see the kind of criticism that David Hogg and Emma González have received but they still persevere," Cendejas said, "that's a living example."

For Loyola High School senior Grant Regen, 18, the class is about using these examples to learn how to talk with people who disagree with him on controversial issues.

"Conflicts are seen as polarized and unsolvable," Regen said. "One of the biggest issues right now is just the separation of differing ideas and the refusal to bring together the ideas to make a better reality."

Cendejas doesn't want this program, or his courses, to be unique to Loyola. The teacher is even working on a high school textbook, the first of its kind, that aims to help inspire more schools to add this type of class.

But that doesn't mean he always has all the answers.

His Sept. 11, 2001, peace studies class at Marymount High School in Los Angeles immediately followed the news that the Twin Towers had been hit in an apparent terrorist attack.

Cendejas said students began asking, "Where's God?" — and how they were supposed to respond.

"I didn't have immediate answers for them," he said. "They were asking the same questions I was."

Years later, he's learned that admitting he doesn't always have the answers and letting students know they can help figure out problems is the best way to approach learning.

"Find yourself letting go," he tells the class.

The classroom, filled with 17 teenage boys, is silent. All have their eyes closed and focus on their breathing as Cendejas encourages them to push away thoughts of upcoming advanced placement tests.

The room is decorated with motivational T-shirts: "Do you even pray, bro?" and "The pope gives me hope." A Time magazine cover of Parkland students and a "Hamilton" musical program are on the wall.

Every inch of the classroom is decorated with intention and motivation. 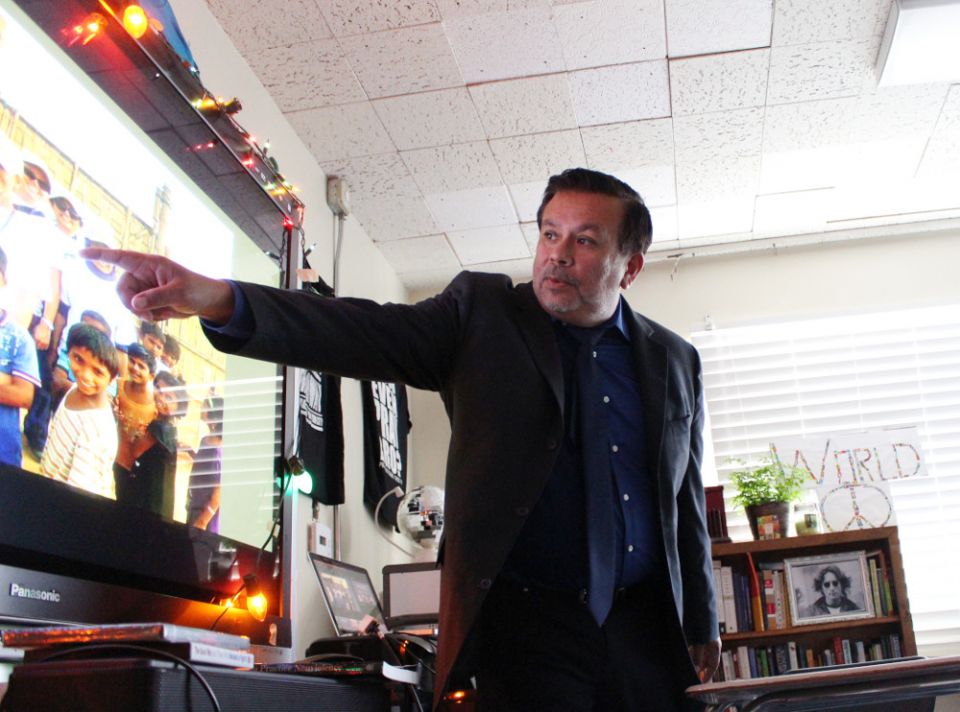 To help his students find inner peace, Cendejas also teaches them to explore their personalities, which gives them a better understanding of how they learn, interact with others and see the world.

Multiple students said it's helped them take a step back during arguments for a more productive approach — an impressive ability for anyone, let alone a teenager.

"Is that really helping the argument?" senior Connor Jamieson, 17, said he recently started asking himself when arguing with a sibling. "I'm thinking back to the things that I learned."

He and peer William Ortiz, 18, are part of a new program that's branched out of the class called "Peace Igniters."

As part of their senior service project, the two students "go and set the world on fire" by traveling to schools around Los Angeles teaching lessons on peace and nonviolence to younger students.

The first year, only one Loyola student signed up to be a "Peace Igniter." This year, it was two. And Cendejas is hopeful it'll continue to grow.

Jamieson and Ortiz said it wasn't easy learning how to teach an entire class, and they had to change some things after the first few lessons. But, with Cendejas' help, they got the hang of it.

"You're able to help these kids at a young age to deal with life's stresses in a positive way," Ortiz said.

It's also important to Cendejas to teach that peaceful, nonviolent actions don't always have to be as grand as a protest or march. Coming out as LGBT or accepting those who do, for example, can be an act of nonviolence, he said, because nonviolence is based in sharing truth and love.

"If a person has a truth to share with others and we can receive it with love," he said, "then that act can actually make people aware within the church, within our communities."

"Conflicts are seen as polarized and unsolvable. One of the biggest issues right now is just the separation of differing ideas and the refusal to bring together the ideas to make a better reality."

Cendejas also shares the story with his class of when he was arrested for participating in a Los Angeles protest against the killing of six Jesuit priests, their housekeeper and her daughter in El Salvador in 1989. The principal of the school he was working for gave him time off to protest and also packed him a bag of snacks. He even had a group of people show up to cheer him on as he was arrested.

"When you finally are getting arrested for your conscience, and it's your own government arresting you, it can be very lonely," he explained.

Each person in his story was extremely important to him and, in their own way, participated in his peaceful nonviolence.

"Not everybody is called to do every aspect," Cendejas said.

"Christian nonviolence guides all of it," he said.

A version of this story appeared in the July 27-Aug 9, 2018 print issue under the headline: Peacemaking tools in action .