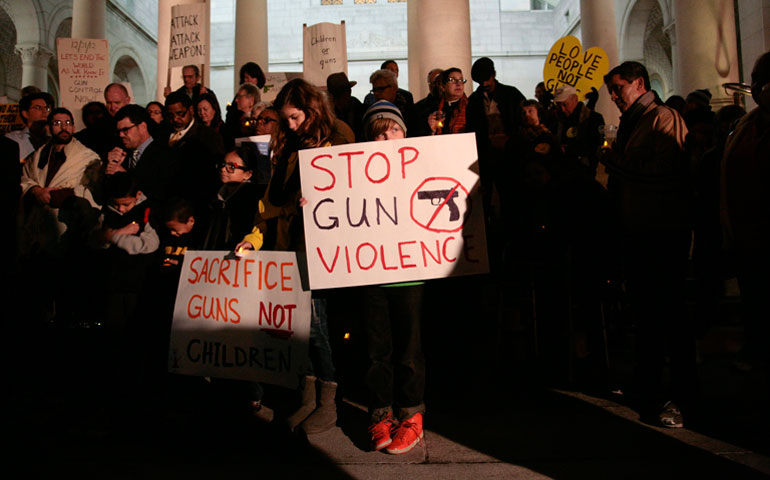 Are Catholics too timid to form a united front against the pandemic of violence that wracks the nation?

Activists and pastors who work with street violence or teach peacemaking and nonviolence fear the answer to that question is yes. They say the best response to the tragedy of Sandy Hook Elementary School in Newtown, Conn., where on Dec. 14 Adam Lanza, 20, shot and killed 20 first-graders, six teachers, his mother and himself, is a re-commitment to Gospel nonviolence and a grassroots-up movement to change our culture.

"Pro-life Christians who are a major political force in this country should be leading" a movement for saner gun control laws, says John Gehring, Catholic program director for the advocacy group Faith in Public Life.

"If the sanctity of human life in the womb galvanizes evangelical Christians and Catholics to march on Washington, create sophisticated lobbying campaigns and hold members of Congress accountable, there is no excuse for pro-life timidity on this issue," Gehring wrote in a commentary about gun violence and the pro-life movement on his organization's website.

"Catholic bishops, who will help mobilize many thousands of pro-life activists ... for the annual March for Life in Washington, could also put more lobbying muscle behind gun control efforts," he wrote.

If the bishops want to be outspoken on gun violence, they would seemingly have support from the pews. A sizeable majority of Catholics, 62 percent, favor stricter gun control laws, according to an August poll conducted by Public Religion Research Institute in partnership with Religion News Service. Fewer than half of white evangelical Protestants, 35 percent, and white mainline Protestants favor stricter gun control laws, the survey found.

The bishops also have an intellectual framework. The most direct U.S. episcopal statement on guns and violence is their 2000 document "Responsibility, Rehabilitation, and Restoration: A Catholic Perspective on Crime and Criminal Justice," which reads: "As bishops, we support measures that control the sale and use of firearms and make them safer -- especially efforts that prevent their unsupervised use by children or anyone other than the owner -- and we reiterate our call for sensible regulation of handguns."

A footnote in that statement adds, "However, we believe that in the long run and with few exceptions -- i.e., police officers, military use -- handguns should be eliminated from our society."

A week after the shootings in Newtown, the U.S. Conference of Catholic Bishops issued a statement decrying violence in society and reasserting their 2000 statement. They called for greater support for mental health services and for the entertainment industry to re-examine its glorification of violence and how it preys "on the insecurities and immaturity of our young people."

Many in the Catholic community want the bishops to move beyond words.

Benedictine Sr. Mary Lou Kownacki, a former executive director of Pax Christi USA, points to the work of Pax Christi and the bishops' 1983 peace pastoral, "The Challenge of Peace," as proof of the church's strong endorsement of nonviolence but adds that the "words fall empty."

The teachings do not have the follow-up that would make them something that the ordinary Catholic would be forced to grapple with, she said.

Bishop Thomas Gumbleton, former president of Pax Christi USA and retired auxiliary bishop of Detroit, told NCR that twice in two years he has called the bishops' conference offices to order copies of the peace pastoral, only to be told they were out of print and no copies are available.

"That's one of our most important documents, recognized as such not only within the church but outside the church, and yet we're not using it," Gumbleton said. "It certainly would help if [the bishops' conference] would begin to put emphasis on this again."

Fr. Michael Pfleger, a priest known for his nonviolence work in Chicago, said that on the issue of violence the Catholic church, like much of America, has fallen silent. He said it's because the majority of victims of violence are persons of color and poor.

Chicago has seen almost 500 murders this year -- that's a scandal, he said.

"Whether it's a black child in Chicago or a Hispanic child in Texas or a white child in Connecticut, we have to be equally outraged," he said.

The church seems to have turned away from its core social justice teachings, which are central to the Gospel, making them "like extracurricular classes in the Catholic church," he said.

Pfleger thinks that conflict resolution classes should be mandatory in Catholic schools and parishes should teach parishioners how to work for peace, not only pray for it.

Jesuit Fr. John Dear sees one problem with this. "I think the bishops and priests in the United States are not educated in the methodology of Gospel nonviolence."

"Nonviolence and social change always comes from the bottom up. It's never a top-down process," said Dear, who writes a weekly column on peacemaking for the NCR website.

One Catholic working from the grassroots is M.J. Park, a former junior high teacher who with her husband, Jerry Park, develops peace teaching curricula and directs Little Friends for Peace, a school they founded that teaches peace mainly to children in Washington, D.C.

Years ago, she realized that while she heard a lot of preaching about the old Catholic standards of loving your neighbor and loving your enemy, she was never hearing how to do it.

She needed practical tools to work for peace, so she researched and created some and turned them into a curriculum. She studied the bishops' 1983 peace pastoral, joined Pax Christi and took the group's vow of nonviolence.

She told NCR that children should spend as much time on peacemaking classes as they do on math. She does not get much of a response when she asks bishops to infuse peace education in schools.

Teaching the way of nonviolence and how to resolve violent situations through nonviolence from preschool through graduate school was part of the vision of the peace pastoral, Gumbleton said. "But we're not doing that. We've failed."

While Gumbleton, who was a pastor of an inner-city Detroit parish from 1983 to 2007, believes strict gun control laws will help stem the killing, that is not enough. "We have to go deeper, because our culture is a culture of violence, from the violence of abortion to the violence of nuclear war."

"We just believe violence is the way you solve your problems. And that seems to be the underlying spirit in the U.S.," he said. "Jesus came to counteract that kind of culture, and we need his teachings more now than we ever have."

Trying to come to grips with this will take "radical conversion," he said.

[Contributing to this story were Dennis Coday, Zoe Ryan, Brian Roewe and Porsia Tunzi of NCR with material from Catholic News Service.]

A version of this story appeared in the Jan 4-17, 2013 print issue under the headline: Catholic stand for peacemaking wanting, some say.