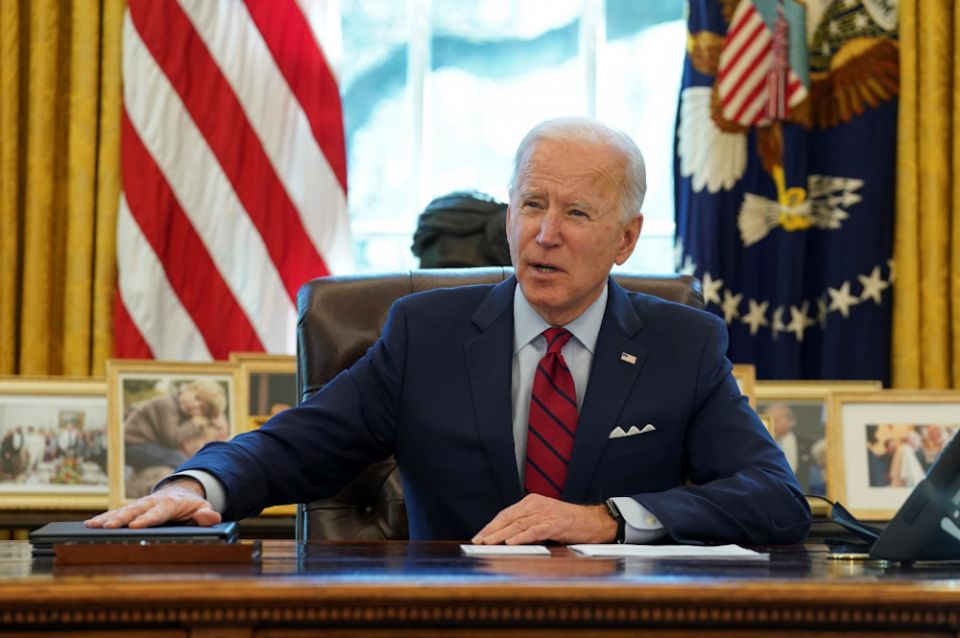 Catholic proponents of nuclear disarmament joined scientists in calling on President Joe Biden to pursue an ambitious plan to end the threat nuclear weapons pose to the planet.

In a statement to the White House May 12, a group of 14 disarmament advocates — seven Catholics, including three bishops, and seven scientists — urged Biden to seek a new agreement with Russia to continue reducing nuclear weapon stockpiles and work worldwide to achieve their abolition.

"We are scientists committed to protecting health and safety and Catholic leaders committed to the common good of all people," the statement begins. "We are uniting in calling on President Biden to reduce the nuclear threat as our nation works with others for a world without nuclear weapons."

Susan Gunn, director of the Maryknoll Office for Global Concerns in Washington, was one of the Catholics who signed the statement. She said it is time for the United States to move "from a culture of fear, a culture of death to a real, just and lasting peace that is life affirming."

"I'm glad to say we see the Biden administration as a new beginning, a chance to recommit, to refocus on nuclear disarmament," she told Catholic News Service.

The Union of Concerned Scientists' Global Security Program and Stephen Colecchi, former director of the U.S. Conference of Catholic Bishops' Office of International Justice and Peace, collaborated on developing the statement.

It was released as reports have circulated that Biden and Russian President Vladimir Putin are seeking a summit in June, when Biden travels to Europe to meet with allies.

It also comes as planning is underway for the Aug. 2 opening of the 10th review conference on the Treaty on the Non-Proliferation of Nuclear Weapons at United Nations headquarters. The conference was postponed for a year because of the COVID-19 pandemic.

The statement calls for several long-standing items disarmament proponents have advocated to past U.S. administrations: instituting a no first-use policy in military planning; collaborating with Russia and other nations to verifiably reduce nuclear arsenals; redirecting spending from weapons modernization and the development of new weapons toward human needs; working to ratify and bring into force the 25-year-old Comprehensive Nuclear-Test-Ban Treaty; and promoting a Fissile Material Cut-off Treaty to prohibit production of weapons-grade nuclear material.

The signers also ask Biden to "affirm" the Treaty on the Prohibition of Nuclear Weapons, which went into force in January, as complementary to existing agreements.

Catholic signers said the statement reflects the repeated calls of Pope Francis to rid the world of nuclear weapons, most notably in his encyclicals "Laudato Si', on Care for Our Common Home" and "Fratelli Tutti, on Fraternity and Social Friendship."

"If there is a voice to which President Biden, as a Catholic, should be listening, it seems to me at this point it is Pope Francis on an issue that is weighted with moral significance," said signer Marie Dennis, senior adviser to the secretary general of Pax Christi International. "It just seems this is the time for the U.S. to move in the right direction."

Bishop John Stowe of Lexington, Kentucky, president of Pax Christi USA, said he signed the statement because it is important to demonstrate ties between religious leaders and scientists who share a common concern about the dangers of nuclear weapons.

"That united voice is a very powerful one," said Stowe, who was joined by Cardinal Joseph Tobin of Newark, New Jersey, and Bishop Robert McElroy of San Diego as signers of the statement.

"We're hoping it has some impact on the meeting between the presidents," the bishop added.

The letter is "another effort by people who think that dealing with nuclear weapons and weapons more generally is pretty critical for getting us to a more peaceable kingdom, so to speak," said signer Pierce Corden.

Corden is a former official in the Arms Control and Disarmament Agency at the U.S. Department of State and an expert adviser at the Permanent Observer Mission of the Holy See to the United Nations.

"It points to the importance of the United States and other states in the world globally that renewing action to eliminate nuclear weapons is necessary. And it's purely consistent with the view of Pope Francis," he said.

The statement echoes papal appeals dating to the 1960s as well as appeals by the U.S. Conference of Catholic Bishops and former U.S. Presidents Ronald Reagan and Barack Obama, who publicly discussed a desire to one day eliminate nuclear weapons.

"We call on President Biden to reaffirm the goal of a world free of nuclear weapons and to take concrete steps to realize it," the statement said.

Soon after taking office, Biden extended for five years New START, the last remaining nuclear arms control agreement between the U.S. and Russia. It caps the number of deployed strategic nuclear warheads and bombs by each country at 1,550.

Despite the treaty remaining in force, both countries are in the midst of yearslong multibillion-dollar programs to modernize their nuclear arsenals.

Stowe said that moving forward, he believes it is time for the world to resurrect the concern that was expressed in past decades about the threat of nuclear weapons to all life.

"With the pandemic and global warming, I'm not sure how often people think about nuclear weapons and the constant threat that presents," he told CNS. "We forget that those weapons are still there, and in many cases great investments in them are being made."