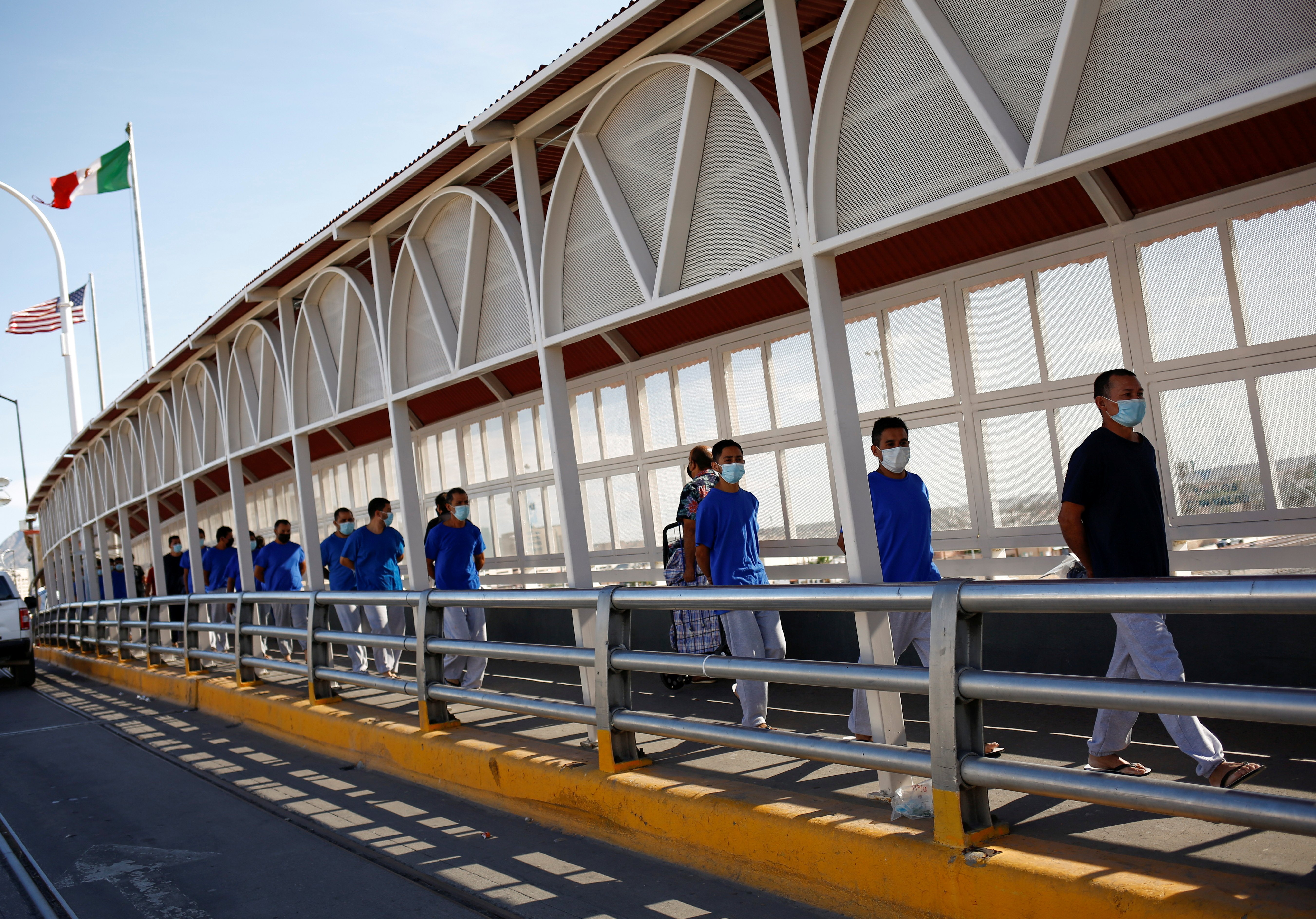 Migrants expelled from the U.S. and sent back to Mexico under Title 42 walk toward Mexico at the Paso del Norte International border bridge, in this picture taken from Ciudad Juarez, Mexico, July 29, 2021. (CNS photo/Jose Luis Gonzalez, Reuters)

To the dismay of immigration advocates, the Biden administration announced Aug. 2 it would continue implementing a public health rule enforced by the Trump administration, saying migrants at U.S. border crossings would be turned away to keep COVID-19 at bay.

The government follows guidance from the Centers for Disease Control and Prevention, which said in an Aug. 2 statement that allowing in certain noncitizens, whether they are coming from the Canada or crossing into the U.S. at the Mexico border, "creates a serious danger of the introduction of COVID-19 into the United States."

Minors are exempt and some exceptions for families have been made.

Immigration advocates had been hearing the rule would be suspended by the end of July for all families crossing the border, even though they had asked that it be done away with altogether.

But the CDC's latest guidance said the temporary suspension of allowing these migrants in is necessary to protect public health given the threat from emerging variants and said it will be reviewed every 60 days.

The news dealt a blow to those who had been anticipating at least a partial lifting of the measure.

Groups such as the American Civil Liberties Union immediately weighed in, saying it will file a preliminary injunction to stop the use of Title 42, a provision of U.S. public health law that Trump administration officials implemented to keep migrants out as COVID-19 infections began rising in the U.S. in 2020.

Because of this provision, U.S. Border Patrol agents were instructed to expel anyone caught trying to illegally enter the U.S. instead of processing them under existing immigration law.

Figures posted as of July 16 on the U.S. Customs and Border Protection website estimate that more than 752,000 expulsions under Title 42 took place during the federal government's 2021 fiscal year.

David Shahoulian, assistant secretary for border and immigration policy at the Department of Homeland Security, said in an Aug. 2 court filing "the United States is currently encountering record numbers of noncitizens, including families, at the border."

"These encounters have strained DHS operations and caused border facilities to be filled beyond their normal operating capacity, impacting the ability to employ social distancing in these congregate settings," he said.

The department also is seeing "significantly increased rates of noncitizens" with COVID-19, the filing said, meaning that overcrowding in its facilities would "create significant public health risks."

On July 28, asylum-seekers, human rights groups and faith leaders participated in a vigil in front of the White House calling for an end to the measure and demanding that instead of turning migrants back, the administration "create a robust humanitarian reception system including welcoming hubs at the border and case management," said a news release from the Interfaith Immigration Coalition.

But White House press secretary Jen Psaki said Aug. 2 the administration would continue to look to the CDC for guidance on how to proceed.

"We have not given a timeline of when ... they will lift Title 42, but we will look for (the CDC) to provide us that guidance," she said.