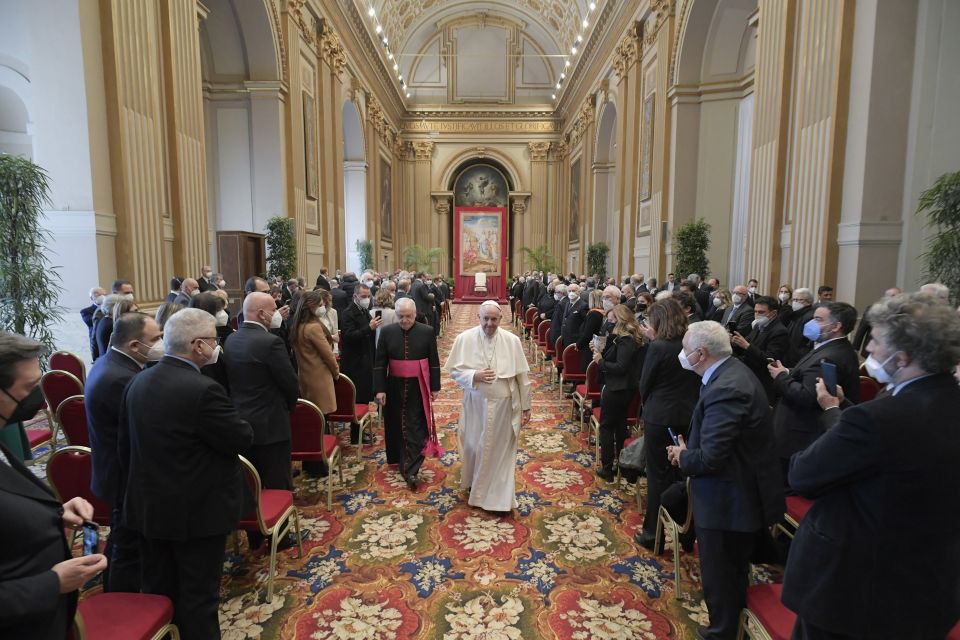 Pope Francis leaves after leading a meeting with judges, prosecutors, investigators and other members of the Vatican's state tribunal to formally open the court's judicial year at the Vatican March 12, 2022. (CNS photo/Vatican Media)

VATICAN CITY — Financial and judicial reforms are meant not only to bring the Vatican up to date with international standards of transparency but also to make the church's structure reflect "an increasingly evangelical style," Pope Francis said.

Meeting March 12 with judges, prosecutors, investigators and other members of the Vatican's state tribunal, the pope said that when it comes to financial management and transparency, "the church must be exemplary and irreproachable, especially on the part of those who hold important roles of responsibility."

The pope's comments at the formal opening of the court's judicial year came less than a week before Cardinal Angelo Becciu, former prefect of the Congregation for Saints' Causes, was expected to testify at a trial against him and nine other defendants on charges related to financial malfeasance.

The trial revolves around a controversial property deal in which the Vatican lost millions of dollars. At the time of the property deal, then-Archbishop Becciu served as "sostituto," the No. 3 position in the Vatican Secretariat of State.

The Italian cardinal, who is accused of embezzlement, also will be questioned about his alleged involvement in misappropriating Vatican funds and redirecting them to Spes, a Caritas organization run by his brother, Tonino Becciu, in his home Diocese of Ozieri, Sardinia.

Welcoming the members of the Vatican court, Pope Francis thanked them for the "dedication with which they engage in the delicate service of the administration of justice.

Even in the court's work, he said, "synodality," is necessary, because in judicial matters, all participants in a trial "are called to contribute to ascertaining the truth through cross-examination, comparison of arguments and careful examination of the evidence."

"This walking together therefore requires an exercise of listening, which, as we know, belongs to the very nature of a just process. In judicial activity, magistrates are required to constantly exercise honest listening to what is argued and demonstrated by the parties, without prejudice or preconceived ideas," the pope said.

While justice implies a careful evaluation of "opposing positions" and discernment, he said, it must "always be combined with instances of mercy, which ultimately invite conversion and forgiveness."

"There is a complementarity between these two poles and a balance must be sought, in the awareness that, if it is true that mercy without justice leads to the dissolution of the social order, it is also true that mercy is the fullness of justice and the most luminous of the truth of God," the pope said.

Further work is needed, he said, to update legislation "in the area of criminal procedure and international cooperation," as well as in the development of procedures that allow for the pursuit of justice and the protection of all, "especially the weakest and most fragile."

"Indeed, law and judgment must always be at the service of truth and justice, as well as of the evangelical virtue of charity," the pope said.

California officials lead with the 'faith that does justice'

Catholic women's equality requires a shift on the night watch