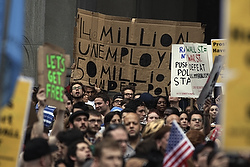 VATICAN CITY -- Catholic social teaching and the Occupy Wall Street movement agree that the economy should be at the service of the human person and that strong action must be taken to reduce the growing gap between rich and poor, Vatican officials said.

"The basic sentiment" behind the protests is in line with Catholic social teaching and the new document on global finance issued Oct. 24 by Pontifical Council for Justice and Peace, said Cardinal Peter Turkson, council president.

The U.S. protesters have focused on Wall Street because "Wall Street is considered to be a big engine house -- a big financial structure whose power extends all over the world," the cardinal told Catholic News Service.

People who suffer from the way the financial markets currently operate have a right to say, "Do business differently. Look at the way you're doing business because this is not leading to our welfare and our good," he said.

"If people can hold their government to account, why can we not hold other institutions in society to accountability if they are not achieving or not helping us live peacefully or well," Cardinal Turkson said.

"The Vatican is not behind any of these movements, but the basic inspirations can be the same," he said.

Bishop Mario Toso, secretary of the justice and peace council, told reporters the Vatican's new document "appears to be in line with the slogans" of Occupy Wall Street and other protest movements around the globe, but "even more it is in line with the previous teaching of the church," including Pope Benedict XVI's 2009 encyclical, "Charity in Truth" ("Caritas in Veritate").

At the Vatican news conference to present the document, Leonardo Becchetti, a professor of economic policy at Rome's Tor Vergata University, explained why the Vatican sees the need for an international authority to govern the global financial market and why individual government interventions to bail out banks haven't helped the global economy.

"The problem of international finance is a problem of self-control" with very few hard and fast rules in place to save both investors and innocent bystanders, mainly the poor of the world, he said.

"It's like someone in a car going 400 miles an hour" and the government mandates wearing a seatbelt. Even with the seatbelt, serious accidents are bound to happen -- injuring the driver and anyone on the road -- if there is no speed limit imposed, Becchetti said.

The government bank bailouts, he said, were like "a benefactor who donated blood for a transfusion for someone dying -- the banks were at death's door. The benefactor is weakened by the donation and, once recovered the one saved punches his benefactor."

In a globalized economy, he said, no one can pretend that one nation's financial actions will impact only that nation, which is why a global authority is needed to establish balance and promote the economic growth and development of the whole world.

The continued wellbeing of the more developed nations also depends on helping the poor, Becchetti said.

"The presence of an enormous mass of the poor and disinherited on a global level, ready to work for salaries that are much lower than those of our workers with the same qualifications," means jobs also are threatened in richer countries, he said.