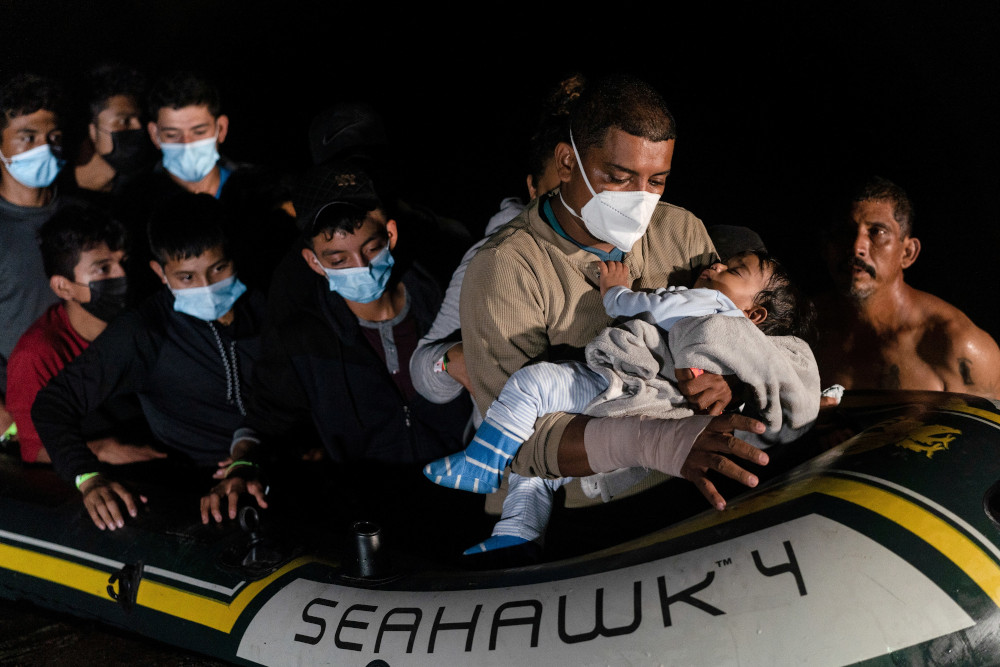 Migrant families arrive Aug. 14 in Roma, Texas, after crossing the Rio Grande from Mexico amid the coronavirus pandemic. (CNS/Reuters/Go Nakamura)

July saw record encounters between Customs and Border Protection agents and people attempting to cross the U.S.-Mexico border — 213,000 in total, said U.S. Secretary of Homeland Security Alejandro Mayorkas during an Aug. 12 trip to McAllen and Brownsville in Texas.

It's a story 25-year-old Jose Andres Martinez considers himself lucky to be able to tell.

The young Salvadoran, a former sacristan, attempted to cross the U.S.-Mexico border near McAllen, Texas, at least six times between July and August.

Authorities caught him twice and swiftly released him to the Mexico side. While he was able to evade capture on other occasions, he finally gave up trying to cross in mid-August because of stepped-up security at the border. He almost made a seventh attempt — walking through the desert during the hottest months of the year — but he feared it would have led to his death.

"The coyotes, they could care less," said Martinez, referring to smugglers some migrants pay to help them cross the border during an Aug. 17 interview with Catholic News Service.

Fresh off a three-day trip from Mexico to his native El Salvador by bus, Martinez recounted the monthlong trek on foot, by bus, in pickups, trailers, watching migrants die of COVID-19 complications along the way in ranches, private homes and warehouses where the smugglers keep their human cargo as they move through an intricate network, even during a pandemic.

Among those Martinez encountered: unaccompanied children en route to be reunited with a parent in the U.S., young pregnant women traveling with infants, a man in his 70s and young single women and men like him, venturing north, hoping for "a better life."

A better life to him means making more than the $250 monthly salary as a sacristan — about the average wage in El Salvador.

"My dream is to buy my mother a house," he said. "I saw the houses our neighbors (who went to work in the U.S.) built. It wasn't jealousy but ... I couldn't make ends meet with the money I was making."

He had heard of the smuggler who took two of his neighbors across the Rio Grande and into the U.S. Within months they were sending money home, Martinez said. 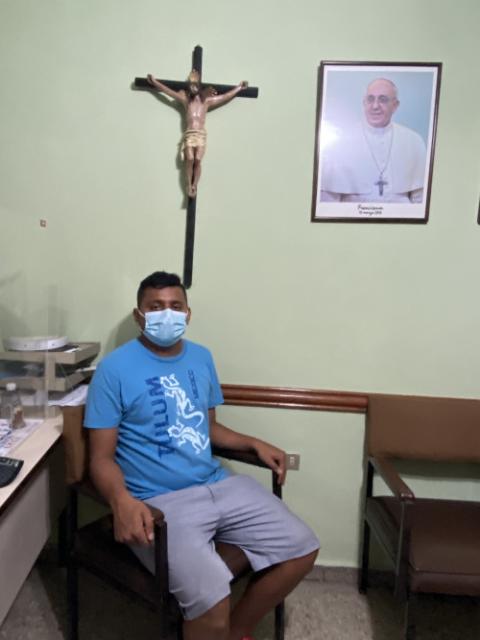 Meanwhile in El Salvador, he was watching businesses close because of the economic impact of the pandemic. He didn't see education as an option toward a better future, he said, citing the example of a man he knows with a college degree who ended up becoming a street vendor because he couldn't find a job.

"In El Salvador, there are no opportunities," he said.

Though he had a secure job and was not facing gang violence, seeing his neighbors' fortune "motivated" him to leave, he said.

"Here, you can't make the kind of money you make over there," he said, referring to the United States.

So, along with his brother, he borrowed money to hire the "coyote" who charged them $10,000 each and the two left in mid-July. What he saw along the trip, "I don't wish on anyone," he said.

A journey that the smuggler had said would take days turned into weeks, many of them sharing crowded spaces with other migrants, none wearing masks, hiding in bathrooms, under mattresses and hidden spaces as authorities searched the buses, trucks and trailers they took up to Mexico.

The smugglers paint the trip "the color of roses," Martinez said, like it is quick, effortless, but he spent days without water or food, was forbidden from using the bathroom, slept on floors next to strangers surrounded by garbage, including dirty diapers left behind.

"I grew desperate," he said.

Even in the age of COVID-19, smugglers and their helpers have made few changes to the way the operate.

Martinez said one of the houses he and his brother were taken to looked beautiful on the outside, but as soon as they walked in, they had a hard time finding a place to sit. It was so crowded that they wandered to the second floor, where they saw people they assumed were sick with COVID-19 coughing, struggling to breathe, "doing really bad," he said.

The promise of getting closer to the border kept him going, Martinez said. The first attempt at crossing the river took them so close to McAllen that they could see the border city's lights in the distance.

"In El Salvador, there are no opportunities."

From a place that looked like a "ranch zone," he was led into a black van with six others, but almost as soon as they exited the van and started walking, small black objects began flying around them. They were at first puzzled, he said.

They were fingerprinted, their unauthorized crossing documented, and were swiftly sent back across the border.

During the second attempt, they were walking through the wilderness and all seemed to be going well until someone spotted border agents in the distance.

"The good thing is that a lot of the migra (immigration officers) are fat so we started running and they couldn't catch us, but their dogs did," he said.

On the third try, the smugglers attempted to have them cross on an inflatable boat.

"I could see crocodiles, alligators, snakes" in the water, he said.

He could feel the boat starting to deflate and asked the man guiding it to do something.

"Don't worry, they're not going to bite you," the man told him.

"My brother didn't want to keep going," he said but after they finally got out of the boat, they once again saw the city in the distance, this time with an open space between border walls. But almost as soon as they saw it, agents began running after them again.

"There were so many obstacles and we saw a 17-year-old die and an old man," he said.  A younger man traveling with the older gentleman made the difficult decision to leave his body behind, Martinez said. 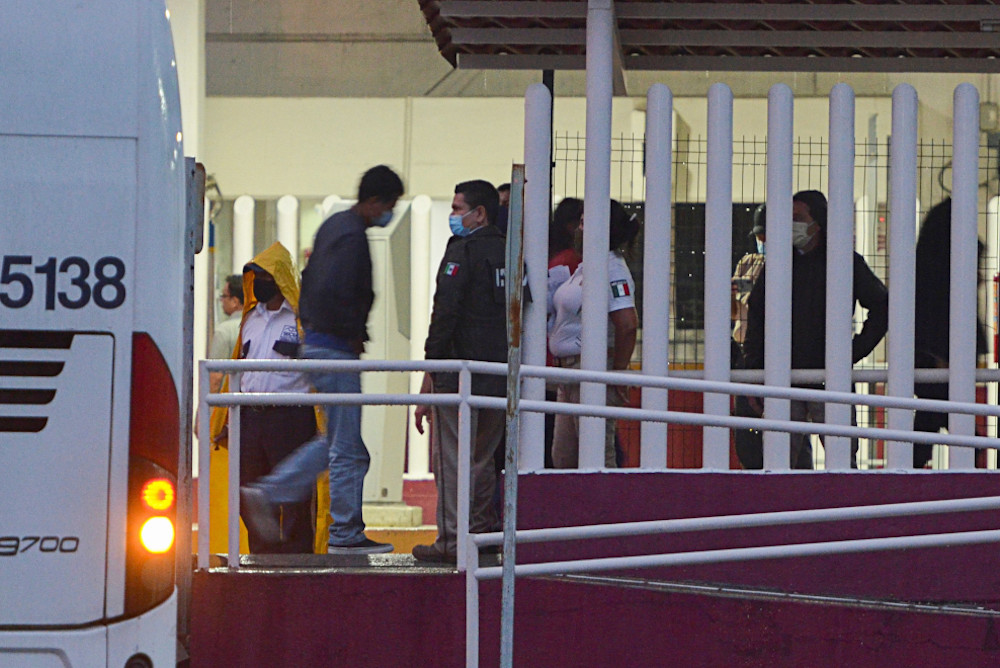 Asylum-seekers deported from the U.S. under Title 42 get off a bus at a migration facility Aug. 9 in Tapachula, Mexico. (CNS/Reuters/Jose Torres)

Right before he and his brother gave up, Martinez said the coyotes had taken them to a warehouse where they once again saw people sick with what they believed was COVID-19. They saw them wrap the bodies of those who likely had died from the disease in blankets and throw them into the trucks. Since the trucks came and went pretty quickly, Martinez said he assumed they were just dumping them in the wild.

The smugglers presented the brothers one last chance to cross, but one that would involve walking through the desert without water.

"We were scared, and we knew we couldn't take it anymore," he said.

It took them three days to get home by bus to San Salvador.

"I'm happy," he said. "There's nothing like sleeping in your own bed, my mom's cooking. I still give thanks to God."

The government offers no help to returnees, he said, but a priest has told him he'll try to help him find another job.

Some ask him whether he'll attempt to cross the border again.

He has to pay off the debt he took out to make the border trip and now he has no job.