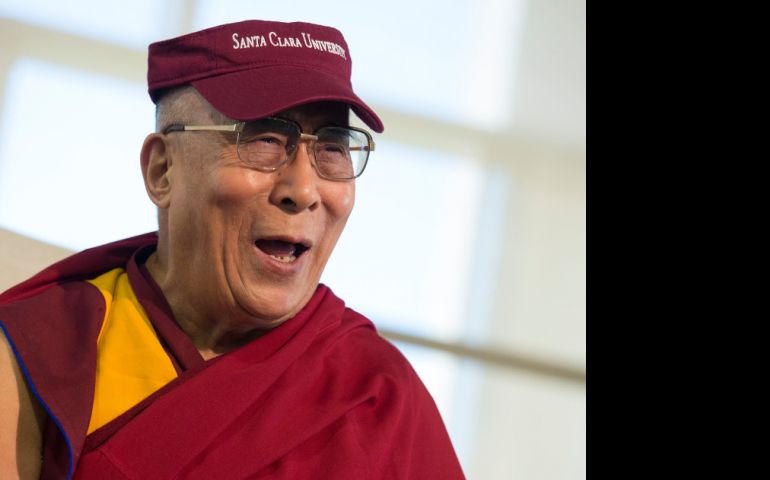 SANTA CLARA, CALIF. -- All human beings are born with the seed for compassion, the Dalai Lama reminded more than 4,000 people gathered at Santa Clara University Feb. 24 for a public dialogue on business, ethics and compassion. But that seed must be nourished by parental love, fostered by teachers, and incorporated into the fabric of the workplace to have a society whose members are compassionate, he said. Only when people can approach life with genuine concern for others will they experience “inner peace and mental comfort.”

The Dalai Lama, the 78-year-old spiritual leader of Tibetan Buddhism, was speaking for the first time at the Jesuit university, where the Markkula Center for Applied Ethics partnered with the Center for Compassion and Altruism Research and Education at Stanford University to bring the Dalai Lama to the heart of Silicon Valley. Jesuit Fr. Michael Engh, Santa Clara University president, said he was “profoundly honored” to welcome the Dalai Lama to the campus known for its education in ethics.

Lloyd Dean, CEO of Dignity Health, one of the nation’s five largest healthcare systems, joined the Dalai Lama on stage for a conversation about compassion in the world of business. Dean said that Dignity Health, which is sponsored by seven religious communities of women and includes both Catholic and community hospitals, has compassionate care at its core.

Dean believes kindness and compassion are both a “right and a calling” that every business should have as guiding principles. “We must focus on how we do, not just on what we do,” he said.

He noted that this emphasis on compassion is an important link between Catholicism and the Buddhism espoused by the Dalai Lama, who is believed by Tibetans to be the 14th incarnation of the Bodhisattva (enlightened being) of Compassion.

Both men agreed that cultivating compassion is the antidote to the stress and anxiety that occurs when businesses put profit before people. “Why do so many not bother with this human value?” asked the Dalai Lama. “That’s how unhappy people happen. They don’t care, they manipulate and exploit others.”

But, he said, it is not enough to look lovingly at those who are suffering and living in great poverty. One must also look at exploitive economic systems and work to bring changes that improve life for those in need. He recalled seeing an impoverished, disabled child in Delhi, India, three months ago.  In her eyes was a “great hopelessness,” he said. “We need more education about concern for others in need.”

When asked for advice to young people, the Dalai Lama offered four suggestions: avoid self-centeredness, remain honest and truthful, use one’s personal capacity for discernment, and practice love and forgiveness with conviction.

The Dalai Lama’s visit to Santa Clara was not without controversy. Just outside the university’s entrance, about 100 supporters of Shugden Buddhism chanted and held signs reading, “Grant Religious Freedom to Shugden Practitioners.” They were protesting the Dalai Lama’s action in 1975 to discourage worship of Dorje Shugden, one of Buddhism’s ancient deities.  This practice, according to the Dalai Lama’s website, has a history of contributing to a climate of sectarian disharmony in various parts of Tibet and between various Tibetan communities.

In 1989, the Dalai Lama was awarded the Nobel Peace Prize for his opposition to the use of violence in the Tibetan struggle for autonomy within the People’s Republic of China and for his international work on issues of peace and human rights.

Reject violence, hatred, revenge, and only live the way of love

It's time to end male supremacy in the Catholic Church