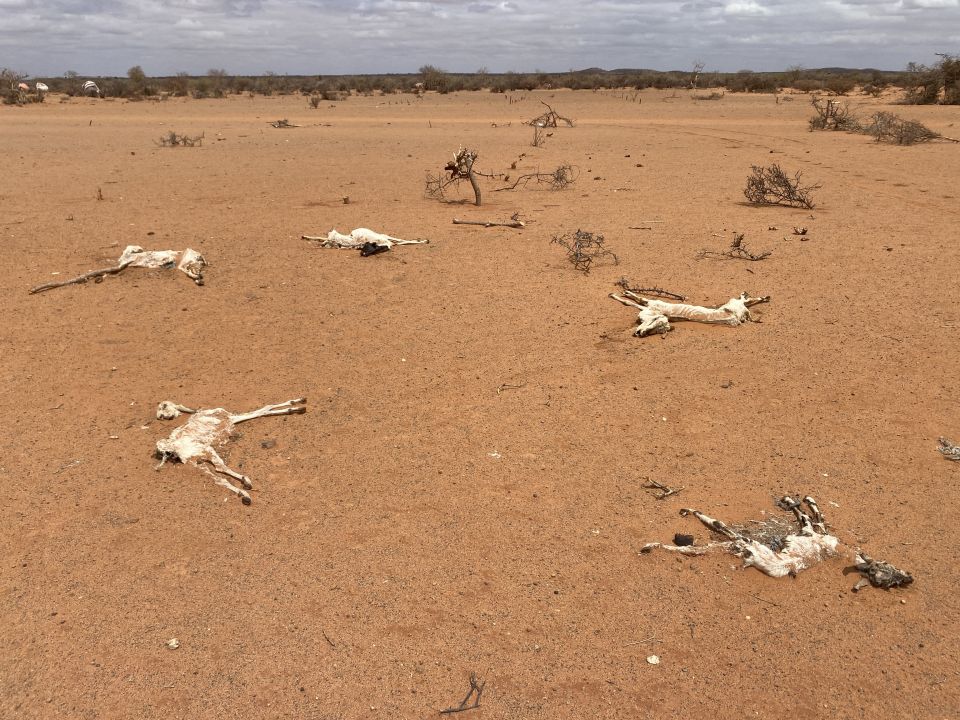 NAIROBI, Kenya — Catholic priests, nuns and church agencies are providing some relief in East Africa's drought, which scientists and experts describe as the worst in 40 years.

But the need for food, water and other basics in the drought, resulting from a fourth successive rainy season failure, is so huge that this seems a "small drop in the ocean."

Harvests are decimated, water sources have dried up and the scorching heat has wiped out livestock pastures. Dead livestock or wildlife carcasses have become common by roadsides, as small-scale farmers and herders suffer the devastation.

By April, agencies estimated that nearly 16 million people in Ethiopia, Kenya and Somalia were in urgent need of food assistance due to the drought and were suffering hunger, severe food shortages and extreme hardships.

"In the last three years, it has not rained as expected, and the people are depending on relief aid that comes," he added, while describing the situation in his area as precarious and extremely dire.

Marsabit is one of the regions in Kenya facing a severe drought. For this region and others, experts and scientists are linking the shift in rainfall patterns to climate change. Until recently, Easter season was a wet period due to March–May long rains, but that has changed.

Bishop Kariuki told CNS in mid-April that his people had been expecting rains since mid-March, but not a single drop had fallen, and it did not look like any would fall in the near future.

"The ground is bare and even if it rains, the water will sweep away all the top soil because there is no top cover. Even if it finally comes, nobody will plant, because it is already too late. Even beans cannot mature, or whatever they grow — little wheat and finger millet. Nothing will grow. It is a big challenge," said Bishop Kariuki.

In the county, the people are herders and move from one place to another with their livestock in search of water and pasture. With no rains and pasture, most of the livestock have died, extinguishing the people's livelihoods. An interethnic conflict among the communities has left hundreds of people homeless and exacerbated the situation, the bishop said.

"The people are really in need of food, water and whatever else. It is like they are being attacked from all sides: east, west and north. ... The situation is very precarious," he said, while adding that it is difficult to say exactly what needs to be done to solve the problem. "For now, supporting the people with relief food will help them survive ... the other things are long-term solutions."

In the eight countries of the Intergovernmental Authority on Development bloc — Djibouti, Eritrea, Ethiopia, Kenya, Somalia, South Sudan, Sudan and Uganda — 29 million are facing high levels of food insecurity, according to The Food Security and Nutrition Working Group, a regional platform chaired by IGAD and the U.N. Food and Agriculture Organization.

The March-May rains "are crucial for the region and, sadly, we are looking at not just three, but potentially four consecutive failed seasons," Workneh Gebeyehu, IGAD's executive secretary, told a news conference April 11. "This, coupled with other stress factors such as conflicts in both our region and Europe, the impact of COVID-19, and macro-economic challenges, has led to acute levels of food insecurity across the greater Horn of Africa."

In Somalia, this is the worst drought since 1981, according to humanitarian officials. In the country, one of the most affected by climate change in the world, more than 750,000 people have had to leave their homes due to the drought and climate-related factors, with numbers expected to rise to 1.4 million. The number adds to the 2.6 million already displaced by causes related to climate change and the activities of al-Shabab, the al-Qaida affiliate in East Africa.

Paul Healy, Somalia country director for Trócaire, the overseas development agency of the Irish Catholic Church, said a massive increase in severe acute malnutrition is being seen in Somalia's Gedo region, where the organization manages the health system.

"Our stabilization centers are completely full, and children are presenting with severe problems as a result of malnutrition," he said, noting that "1.4 million children under 5 (almost 50% of that population) are acutely malnourished."

The organization is partnering with the U.S.-based Catholic Relief Services in southern Somalia to respond to issues concerning health, nutrition, water and sanitation. The response is integrated in hospitals, health centers and outreach sites.

"However, the needs are huge, and much more funding is needed, and urgently," Healy said, noting that the humanitarian response plan is only 4% funded.

"People are on the brink of famine," Healy said. "If there isn't a well-supported response, we will see many die. It really is dire."

He said famine is just around the corner.

"We must listen to the cry of the most vulnerable and not forget Somalia in the midst of all the other global issues," he said.

At Vatican trial, defense questions the legal system itself

Lens on Creation: Throwing away people