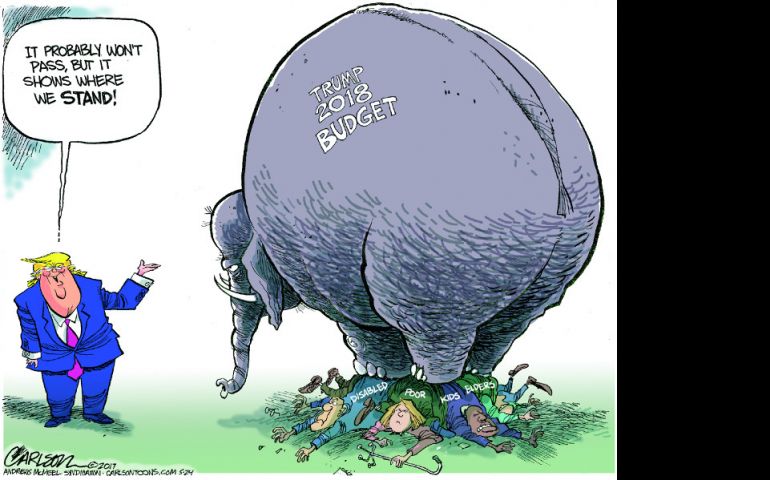 The annual budget proposal the president sends to Congress is more of a message document than a working blueprint, and the message that the Trump administration sent with its priorities on May 23 is frighteningly clear. It spells out in stark terms the Trump administration’s vision for America: It would create a crueler, more selfish society. It gives safe harbor to the richest and most comfortable among us and pits the poor and working class, families and children against the elderly to fight for scraps and leftovers. President Donald Trump would leave Social Security retirement benefits untouched, but would cut Social Security disability payments. Meals on Wheels are safe, but school lunches and food stamps are not.

This document should dispel any notion that Trump is a fighter for “the forgotten Americans.” The proposed budget would gut programs and benefits specifically designed to support working- and middle-class Americans, such as earned income tax credits and child tax credits. It divests from America’s future by cutting or eliminating education programs, grants for higher education and student loans.

Robert Greenstein of the Center for Budget and Policy Priorities said the proposal is a plan for “a new Gilded Age” and called it “the most radical, Robin-Hood-in-reverse budget that any modern President has ever proposed.” The plan betrays the promise Trump made with his campaign slogan. It won’t make America great again; it weakens America by hollowing out its core.

Like so much of what we have seen from the Trump administration, this plan is built on a fantasy. The budget assumptions of economic growth — sustained 3 percent increases — have been called highly implausible by most serious economists and laughable by quite a few.

Furthermore, the budget architects seemingly have no understanding of real-world circumstances. When he presented the budget May 23, Mick Mulvaney, Trump’s budget director, talked about “nudging [the disabled] back to work” and adding work requirements for food stamp eligibility. According to a January report from the U.S. Department of Agriculture, “Nearly two-thirds of SNAP [Supplemental Nutrition Assistance Program, formerly called food stamps] participants were children, elderly, or had disabilities. Forty-four percent of participants were under age 18, 11 percent were age 60 or older, and 10 percent were disabled nonelderly adults.” Which of these should be nudged into work? More important, according to that report, one-third of all SNAP households and 55 percent of SNAP households with children reported incomes in the study period. Only 6 percent of SNAP recipients receive welfare or other cash assistance, the USDA reported.

Guess what, Mr. Mulvaney, being poor already has work requirements — requirements that are impossible to achieve if you live in a region stripped of jobs or have no reliable form of transportation or child care assistance.

This is just one example of how cruel and out-of-touch this budget is. Many others could be cited. An analysis by the Center for American Progress on how the budget proposal would affect Americans with disabilities is a damning indictment of how this budget treats our most vulnerable family members. (See http://ampr.gs/2qWiRPN.)

If this budget is more a vision statement than a working document, we must do all we can to reject this vision for America. The hard work of creating an actual budget will be slugged out in the House and Senate over the next months. Now is the time to raise our voices in support of a budget that protects people with disabilities, supports the working and middle classes, and invests in our future by making education and children our top priorities.

Joining our religious leaders in fasting on the 21st of every month is one outward sign that we can support. We also must bring the full lobbying strength of faith communities to bear on this process by sending witnesses to congressional hearings and showing up at representatives’ offices and town hall meetings.

Now more than ever we must be heard.