Explainer: What critical race theory is — and is not 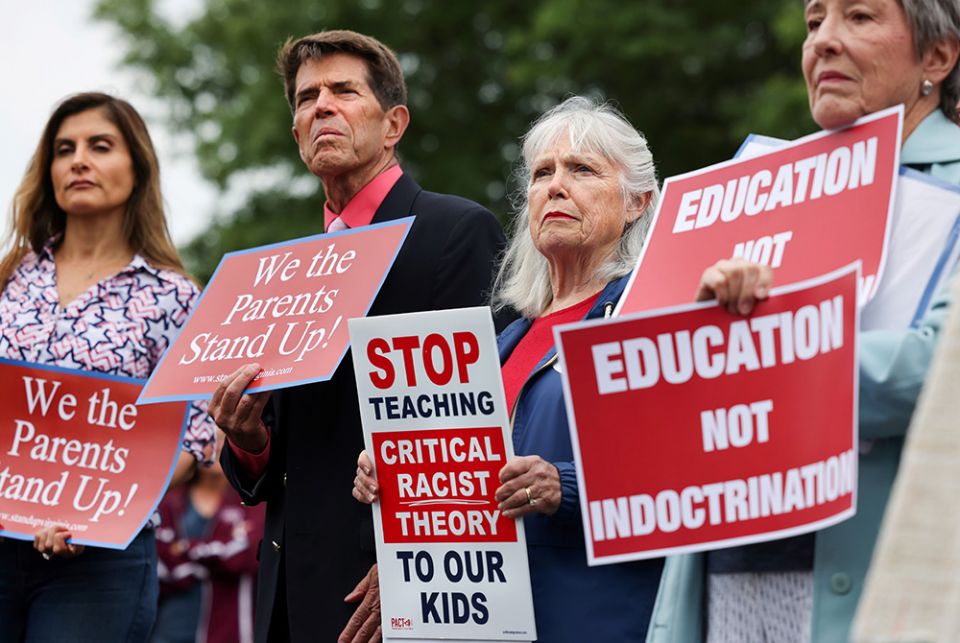 Opponents of "critical race theory" protest June 22 outside of the Loudoun County School Board headquarters in Ashburn, Virginia. (CNS/Reuters/Evelyn Hockstein)

To hear some describe it, critical race theory is Marxism, a threat to the American way of life, reverse racism and a scheme to indoctrinate children.

The reality is less sensationalistic.

"It's a legal theory that started in the early 1970s, after the civil rights movement, that comes mostly out of graduate and law school work," said Sam Rocha, a professor of education philosophy at the University of British Columbia in Vancouver, who has studied and written on the subject.

Critical race theory is primarily an academic legal framework centered on the idea that racism is systemic; that it's embedded in institutions, culture, values and laws, and not just a manifestation of personal bigotry or animus.

The theory holds that racial inequality, because of the country's history of chattel slavery, Jim Crow and other overt racist practices such as redlining, continues to be seen in many facets of American society, including lower educational attainment and home ownership for minority communities, income inequality, and disproportionate arrest and incarceration rates for Black men. 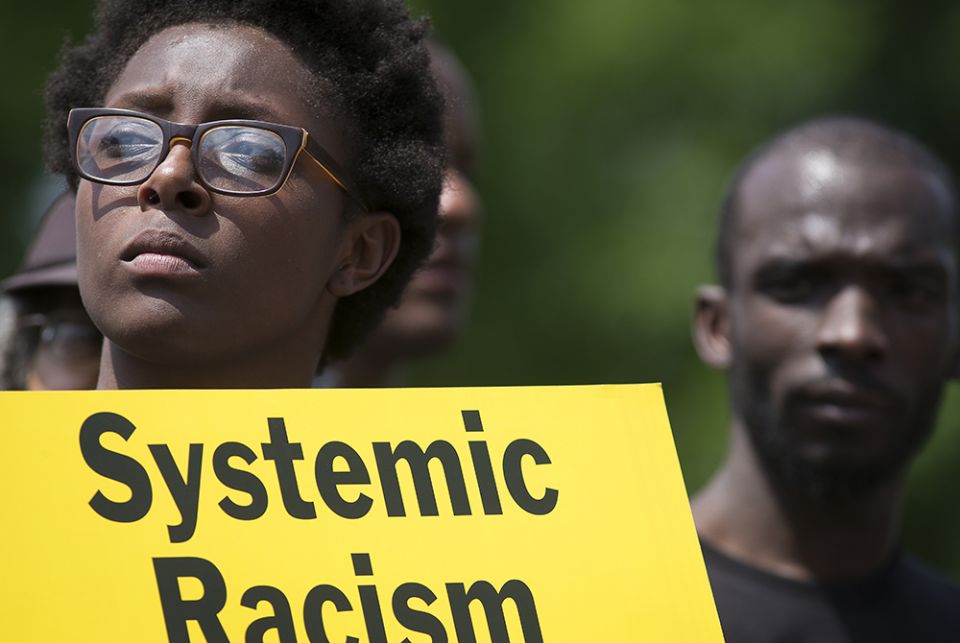 "Critical race theory compels us to confront critically the most explosive issue in American civilization: the historical centrality and complicity of law in upholding white supremacy," the scholar Cornel West wrote in 1995 in Critical Race Theory: The Key Writings that Formed the Movement.

"A lot of times I think people assume that critical race theory is a moral theory of anti-racism, but it's really not," he said. "It's a legal theory that helps itself to a broad and wide tradition, from Black Reconstruction to the founding of the NAACP all the way into the civil rights movement."

In analyzing racism through an institutional lens, critical race theory aligns with the understanding in Catholic social teaching that sin transcends the individual. For example, Pope John Paul II referred to "structures of sin" more than a dozen times in his 1987 encyclical, Sollicitudo Rei Socialis.

"On the face of it, there's nothing in the entire deposit of Catholic Social Teaching, from Leo XIII's Rerum Novarum in 1891 to Pope Francis' Fratelli Tutti in 2020, that is antagonistic to the principles of abolitionism," said Rocha, who will be presenting on critical race theory and Catholic social teaching at the University of Dallas on Oct. 27.

"When the law does not work in the same way for everyone, the Dignity of the Human Person is not fully realized," Pratt told NCR in an email. "This is a particular concern for the poor and vulnerable. Racial inequality makes BIPOC [Black, Indigenous, and people of color] vulnerable to all manner of harm. This is exacerbated for those who are also low-income."

Critical race theory's legal academic roots date to the 1960s and '70s in its precursor, critical legal studies, which examined how the law and legal institutions served the interests of wealthy and powerful people at the expense of the poor and marginalized. Scholars say some of its concepts originate further back to the work of earlier 20th-century civil rights activists like W.E.B. Du Bois, Fannie Lou Hamer and Pauli Murray.

In the 1970s, the late Harvard Law School professor Derrick Bell expressed frustration with what he saw as the limitations of the civil rights movement. Bell and other legal scholars such as Kimberlé Crenshaw and Richard Delgado argued that civil rights legislation and court victories had not totally eradicated racial injustice, and that racial progress in many respects had stalled.

"In the decade after the civil rights movement, you had these Black scholars in law schools, studying the very laws that had justified the enslavement and oppression of their own families and ancestors," Rocha said.

The U.S. Supreme Court's 1954 decision in Brown v. Board of Education, which declared racial public school segregation to be unconstitutional, the Civil Rights Act of 1964, the Emancipation Proclamation and other moments of racial progress for Black people in the country's history generated ferocious backlashes from white Americans.

"After Brown v. Board of Education, you can look at the pictures that journalists took then of protests and signs and the demographics of protesters, and those same identical protests are happening now with respect to critical race theory," Rocha said.

Concerned with what would be the backlash to the civil rights movement, Rocha said Bell and his fellow scholars created a way to read case law that was "attentive to race in a way that had never been seen before." By 1989, critical race theory had emerged as its own organized field of study when academics attended the first annual Workshop on Critical Race Theory.

In 2001, Delgado, who is recognized as one of the founders of critical race theory, and fellow legal scholar Jean Stefancic, published, "Critical Race Theory: An Introduction," where they outlined several tenets that they said most critical race theorists would accept:

Notions of race "correspond to no biological or genetic reality; rather, races are categories that society invents, manipulates, or retires when convenient," Delgado and Stefancic wrote.

Because it argues that racism is codified in laws, embedded in structures and woven into public policy, critical race theory rejects the idea that racism can be eradicated through meritocracy or "colorblindness." In critical race theory, it is not individual bigotry that causes widespread racial inequality, but rather the systemic nature of racism.

Critics would say that the theory finds racism too present and that it echoes a Marxist class struggle, zero-sum battle of oppressors and victims. 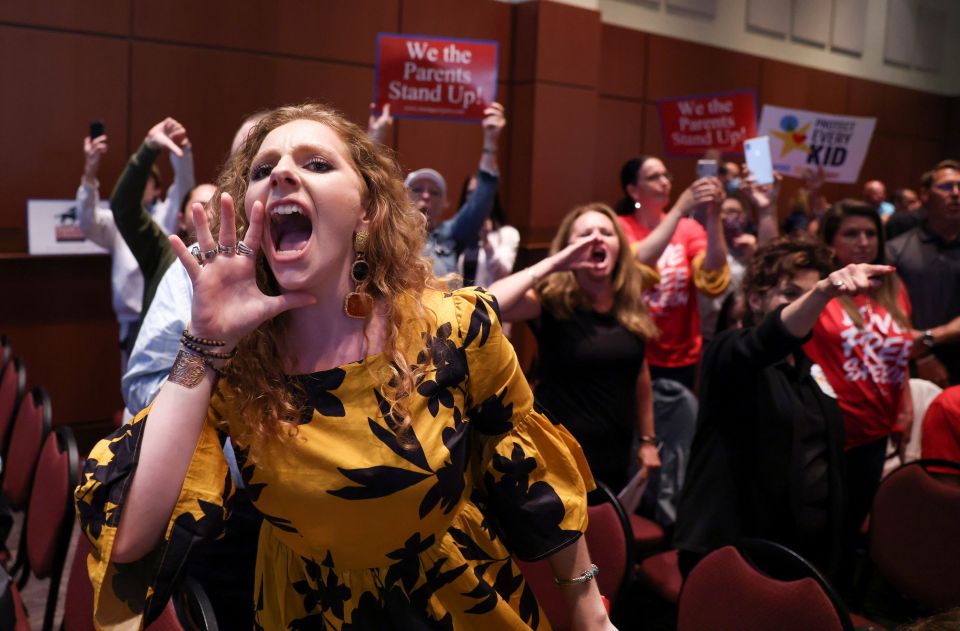 Angry parents and community members in Ashburn, Virginia, protest after the Loudoun County School Board halted its meeting because the crowd refused to quiet down June 22. Many at the meeting objected to critical race theory being part of the curriculum. It is an academic framework examining various issues as they relate to race and racism. Opponents say it discriminates against white people and rejects fundamental tenets of U.S. history. (CNS/Reuters/Evelyn Hockstein)

"I wonder if those who expound that rhetoric know what CRT is," said Pratt, who curates the #BlackCatholics Syllabus, a collection of resources related to Black Catholics in the United States.

In recent months, several Republican-led state legislatures have passed laws to ban the teaching of critical race theory or similar topics in public schools. Conservatives in other states are pressing similar bills and lobbying local school boards to impose their own bans. Teachers nationwide have protested against those measures for having a chilling effect on their classrooms.

Pratt said white Catholics should learn what critical race theory is, and what it isn't.

"CRT is taught to law students and sometimes to graduate students. It's not taught in elementary schools," she said. "Second, those who are truly committed to living out the principles of [Catholic social teaching] should want to support ways to challenge racial inequality in the law and society more broadly. That's what CRT does."

Rocha said critical race theory has shortcomings when it's used outside of its legal academic context.

"Critical race theory is designed to analyze the law, so anything that's not law or policy or really close to something like a statute, it's not really an appropriate object of investigation," he said. "So at the end of the day, critical race theory is a sophisticated tool of analysis of legal harms, but it assumes and it works on the foundations of a larger tradition of abolitionism for its moral apparatus."

A version of this story appeared in the Sept 17-30, 2021 print issue under the headline: What critical race theory is — and is not .

Justice | Explainer: What critical race theory is — and is not

National Council of Churches gears up to combat US racism