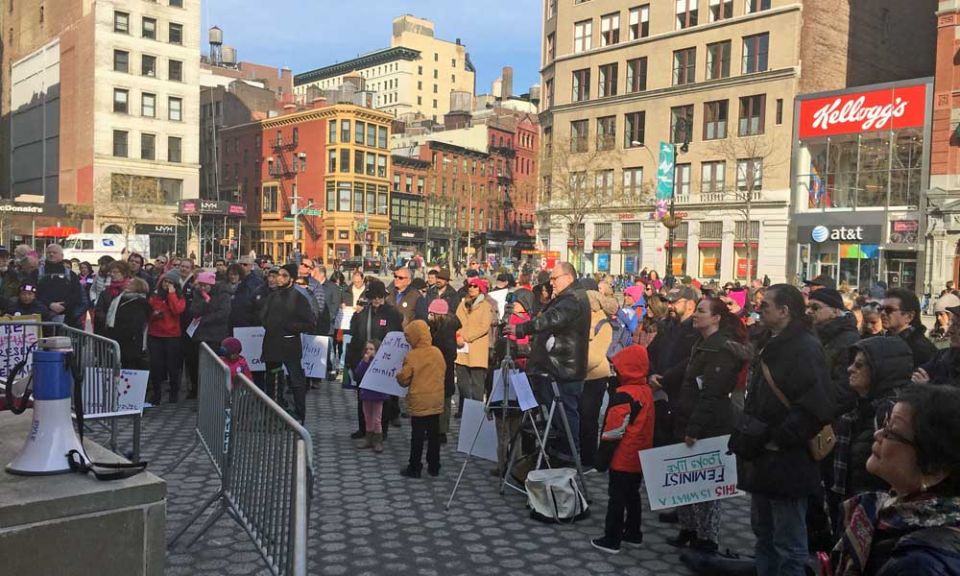 Nearly 100 people gathered at the Feminism and Faith in Union interfaith prayer service Jan. 21 at Union Square Park in New York, many of them parishioners at the Church of St. Francis Xavier. (NCR photo/Jamie Manson)

In early January, an email appeared in Robin Senior's inbox inviting her to an event called "Feminism and Faith in Union."

"I didn't even open it," Senior, a parishioner at St. Dominic's in Oyster Bay, Long Island, said. "I pictured angry, strident, left-wing women. I just had this visceral reaction."

About a week later, a reminder email appeared in her inbox. It described the Feminism and Faith event as a "movement of women and men celebrating the power of feminist activism and sacrament."

"The word sacrament got me to open it," said Senior, who earned a master in theology from the Immaculate Conception Seminary in Huntington in 2006.

She clicked on the event's website and noticed that it offered the Merriam-Webster definitions of feminism — the most looked up word in its online dictionary in 2017.

The definitions were, "the theory supporting the political, economic and social equality of the sexes," and "organized activity on behalf of women's rights and interests."

Senior said she resonated with those definitions. She brought the invitation to prayer and talked it over with her four daughters.

"My youngest daughter said, 'Do it for your grandchildren,' " Senior recalls. "That pushed me over the edge."

Early in the morning on Jan. 21, she found herself boarding a Long Island Railroad train to Manhattan and hopping on a subway to Union Square Park to see what it was all about.

"What if we had a moment that was in the spirit of the women's marches and was also a celebration of our faith?"
—Lizzie Berne DeGear

She found nearly 100 women, men and children gathered in the park. Some were carrying signs that read, "Smart men are feminists" and "All are one in Christ Jesus." Other signs bore the names of the many ministries from the Church of St. Francis Xavier that came to support the event, including its gay and lesbian ministries, the Xavier Immigration Initiative, and Ability Xavier, which celebrates persons with disabilities.

The idea for Feminism and Faith in Union emerged from one specific ministry at Xavier, called the The Women Who Stayed, named in honor of the women who remained at Jesus' cross during the crucifixion.

Lizzie Berne DeGear, one of the ministry's leaders, said the idea for Feminism and Faith in Union emerged when the group noticed that the one-year anniversary of the Women's March landed on a Sunday.

"We thought, why not march to Mass?" Berne DeGear said. "What if we had a moment that was in the spirit of the women's marches and was also a celebration of our faith?"

Two busloads of parishioners from St. Francis Xavier traveled to the march in Washington, D.C., last year. "Women, men, and children, laypeople and vowed religious," Berne DeGear recalled. "We were quite a crew!"

For many of the parishioners, the march was as much a religious experience as it was a political one. "I think many of us who are Catholic and were at one of those marches experienced that feeling as the presence of the Holy Spirit moving among us all," Berne DeGear said. 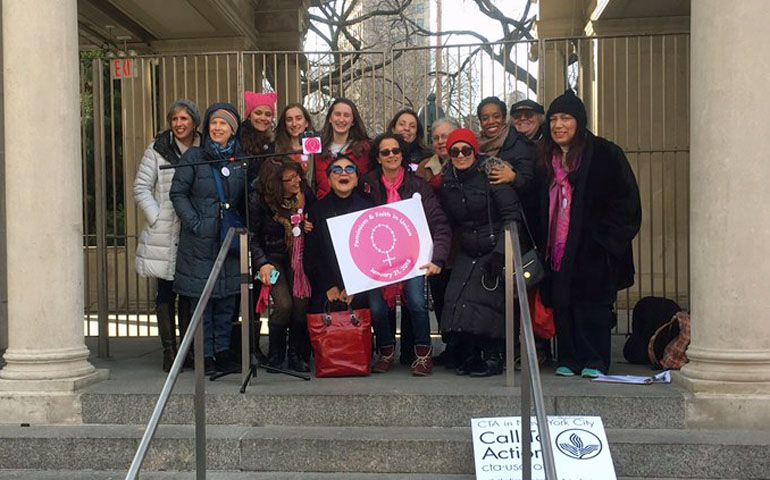 The Women Who Stayed enlisted the sponsorship of a number of Catholic reform organizations, including Future Church, the Women's Ordination Conference, and Call to Action.

Deborah Rose-Milavec, executive director of Future Church, and Sheila Peiffer, president of the Women's Ordination Conference board of directors, were among the 16 women who offered prayers at the Feminism and Faith in Union prayer service in Union Square.

They were joined by women from Protestant, Native American, Buddhist, and Muslim traditions, who also offered blessings to the crowd gathered in the park. The depth and beauty of their words seemed to make the attendees immune to the cold air that swirled around them. (The blessings will eventually be added to the website feminism-faith.org.) 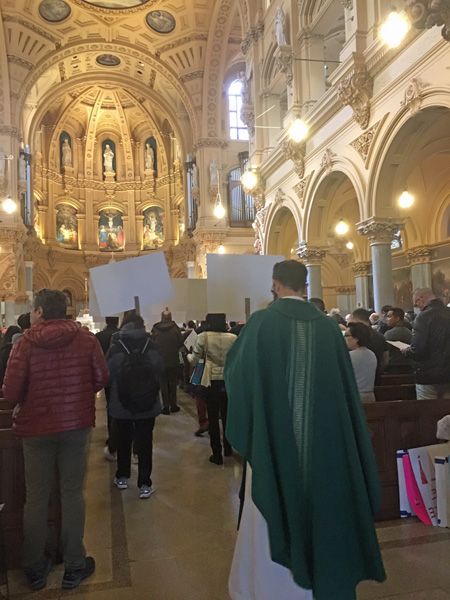 The prayers concluded with a final blessing from three young women from Xavier's Family Faith Program. Attendees then gathered up their signs and marched three blocks to the St. Francis Xavier church, where they were welcomed by the choir singing the South African spiritual "We Are Marching." Those who held signs processed up the aisle, leaving their posters in the church's sanctuary.

Jesuit Fr. Dan Corrou, who presided at the Mass, incorporated the feminism and faith theme throughout the liturgy. Rather than offer a homily, he invited the community to sit in silence for five minutes in solidarity with women's voices that have been silenced in the church.

"The symbolism was powerful and for me personally, it was the most meaningful and healing Eucharist I had ever been a part of," said Rose-Milavec.

The Washington event was inspired by an NCR article about the Faith and Feminism in Union action, which was published a week before the New York event.

Elizabeth McCloskey, a visiting scholar at the John C. Danforth Center for Religion and Politics, read the article and immediately starting organizing.

She and her friend, the novelist Alice McDermott, had spent the better part of the last year dreaming of a creating a campaign that would raise the visibility and voices of Catholic women inside the church.

"We agreed that we had to seize this moment," McCloskey said.

More than 40 people gathered to sing hymns, pray the Litany of the Saints, offer petitions, and listen to the Gospel story of the Prodigal Son, which was reimagined with all female characters.

McDermott offered a reflection that critiqued the institutional church for barring women from the priesthood:

We hold at the center of our faith the conviction that every human life is of equal value. And yet, the institutional church continues to elevate the male over the female. … The moral consequence of this antiquated rule becomes abundantly clear when we follow the inevitable logic of discrimination: if one life, one person, is of more worth than another, then 'the other,' the lesser, is dispensable. The lives of women, and the lives of children, become secondary to the concerns of the more valued — in this case, the male hierarchy. You might call it Cardinal Law logic.

McDermott concluded with a prayer of hope: "We are women of great faith. We persist. We have hope. The God of Mercy compels us to seek justice." 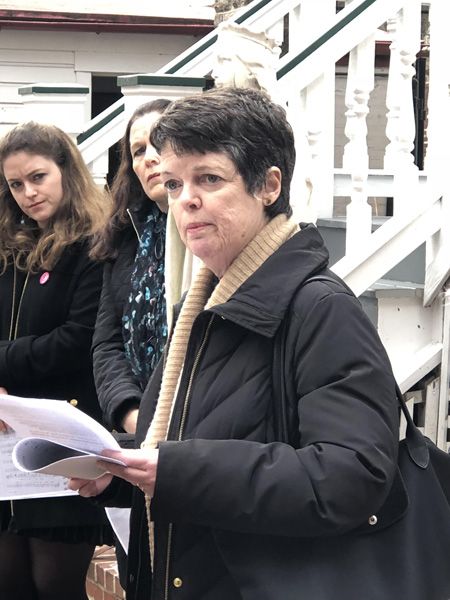 Alice McDermott offered a reflection at the Feminism and Faith in Union event Jan. 21 in Washington, D.C. (Courtesy of Elizabeth McCloskey)

McCloskey said that the event demonstrated "a real desire for women to study Scripture and pray from a feminist perspective in the context of the parish."

She said that a number of attendees brought their teenage daughters with them to show them what a Catholic feminist looks like.

"We were reminding the church that we're here. We are part of the church," she reflected. "Feminism grows out of that sacramental experience."

Attendees at the Washington event seemed to receive as warm a welcome as their counterparts in New York.

"The priest welcomed us by thanking for being women who stayed," McCloskey said. "He said 'we need you.' That was revolutionary to hear, especially in the context of Mass."

Organizers in both New York and Washington are still discerning what their next steps will be. Both groups have already been in dialogue about how to keep the momentum going. All agree that they planted seeds that now must be cultivated.

Back home on Long Island, Robin Senior said that her relationship to feminism is certainly beginning to bear fruit.

"I think I'm starting to be converted to calling myself a feminist," she reflected. "It's a process. I'm on my way."

Related: Women's March renews demands for equality, justice
A version of this story appeared in the Feb 9-22, 2018 print issue under the headline: Event celebrates Catholic feminism .