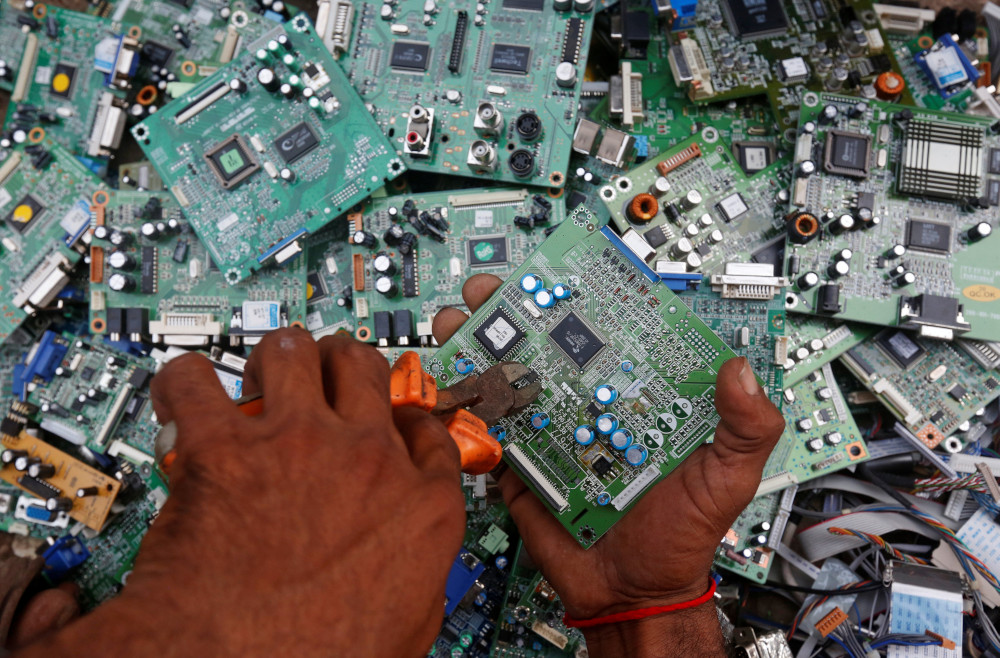 A man in Karachi, Pakistan, retrieves circuit boards from discarded computer monitors Aug. 16, 2017. An economic system lacking any ethics leads to a "throwaway" culture of consumption and waste, Pope Francis said in a speech addressed to members of the Council for Inclusive Capitalism during an audience at the Vatican Nov. 11. (CNS/Reuters/Akhtar Soomro)

An economic system lacking any ethics leads to a "throwaway" culture of consumption and waste, Pope Francis said.

"An economic system that is fair, trustworthy and capable of addressing the most profound challenges facing humanity and our planet is urgently needed," he said in a speech addressed to members of the Council for Inclusive Capitalism during an audience at the Vatican Nov. 11.

The council was created after the Fortune-Time Global Forum, which was held in Rome in 2016 and included a meeting with the pope. Dozens of CEOs from major global corporations attended the forum, where they agreed to specific actions addressing different economic and social problems around the world.

The pope thanked the new council for taking up "the challenge of realizing the vision of the forum by seeking ways to make capitalism become a more inclusive instrument for integral human well-being."

"This entails overcoming an economy of exclusion and reducing the gap separating the majority of people from the prosperity enjoyed by the few," he said.

"A glance at recent history, in particular the financial crisis of 2008, shows us that a healthy economic system cannot be based on short-term profit at the expense of long-term productive, sustainable and socially responsible development and investment," the pope said.

Business is a noble vocation as it creates jobs and prosperity and can improve the world, he said. However, "authentic development cannot be restricted to economic growth alone but must foster the growth of each person and of the whole person."

"This means more than balancing budgets, improving infrastructures or offering a wider variety of consumer goods," he said. It also includes "a renewal, purification and strengthening of solid economic models based on our own personal conversion and generosity to those in need."

An economic system that is completely detached from ethical concerns does not create "a more just social order but leads instead to a 'throwaway' culture of consumption and waste," he said.

"On the other hand," the pope said, "when we recognize the moral dimension of economic life, which is one of the many aspects of Catholic social doctrine that must be integrally respected, we are able to act with fraternal charity, desiring, seeking and protecting the good of others and their integral development."

Francis noted that members of the council hope to increase opportunities and benefits for all people.

"In the end, it is not simply a matter of 'having more,' but 'being more,'" which demands "a fundamental renewal of hearts and minds so that the human person may always be placed at the center of social, cultural and economic life."

"Your presence here is thus a sign of hope, because you have recognized the issues our world is facing and the imperative to act decisively in order to build a better future," he said.

He thanked the members for their commitment to fostering "a more just and humane economy, in line with the core principles of the social doctrine of the church."

"An inclusive capitalism that leaves no one behind, that discards none of our brothers or sisters, is a noble aspiration, worthy of your best efforts," he added.