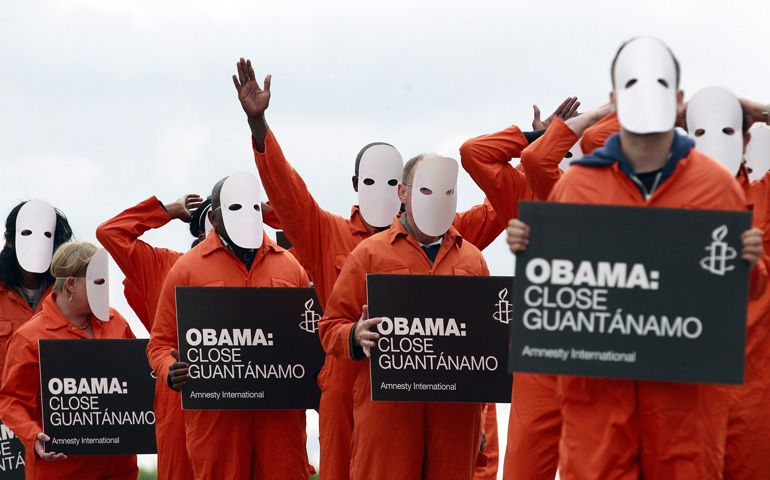 Washington — A growing chorus of voices -- from international human rights groups to grass-roots faith-based activists -- are pushing President Barack Obama to finally make good on his pledge to close the military-run prison at the Guantanamo Bay Naval Base in Cuba.

The bottom line for the organizations is that the basic human rights and dignity of the 166 men who continue to be detained have been violated for years. They say the time has come for justice to be served, especially for the 86 men who have been cleared of any wrongdoing but remain behind bars.

The president has acknowledged as much. Speaking May 23 at the National Defense University in Washington, he pledged for the second time since he took office in 2009 to close the prison, transfer the 86 and to use diplomacy to address the issues that lead to terrorism.

The renewed offer came as a more than 100 Guantanamo detainees took part in a hunger strike to protest their detention. The action had reached 143 days Friday. In response, military doctors at the prison early on turned to force-feeding the strikers. The Miami Herald reported Wednesday that 105 detainees have joined the strike with the number of men being force-fed daily standing at 44.

"The hunger strike represents and acknowledges that the process (to assert the human rights of detainees) in the courts has become entirely futile," said Shayana Kadidal, an attorney with the Center for Constitutional Rights who has represented several Guantanamo inmates.

"It's what they perceive as their only chance of getting out and having a normal, real life with their families again. In that way it's an extraordinary life-affirming act," he said.

The events in Guantanamo have not gone unnoticed by the U.S. Conference of Catholic Bishops.

Bishop Richard Pates of Des Moines, Iowa, chairman of the U.S. bishops' Committee on International Justice and Peace, sent a letter Tuesday to Secretary of Defense Chuck Hagel calling for a review of conditions for detainees and for closing the prison.

"The desperation that the people are being forcibly fed has reach a point that it calls for action," Pates told Catholic News Service Wednesday. "Obama said he would close Guantanamo. This letter says 'Please do it' in the interest of justice and the basic legal rights that everybody has."

Pates' letter raised questions about the practice of "shackling and strapping down" the strikers to force feed them through a nose tube. "Rather than resorting to such measures, our nation should first do everything it can to address the conditions of despair that led to this protest," the bishop wrote.

"Detainees have a right to a just and fair trial held in a timely manner. For at least 86 detainees 'a crime has not first been proven.' The indefinite detention of detainees is not only injurious to those individuals, it also wounds the moral reputation of our nation, compromises our commitment to the rule of law and undermines our struggle against terrorism," the letter said.

The hunger strike may mark a turning point for U.S. actions in Guantanamo in the face of a rising international outcry. The International Committee of the Red Cross and more than 150 doctors acknowledged in a letter published in the English medical journal Lancet that a hunger strike is protected under international conventions and that force feeding is cruel punishment.

Matthew Daloisio, a Catholic Worker in New York who has spearheaded the grass-roots group Witness Against Torture, said Obama's statement on closing Guantanamo means little until he acts. He called the hunger strike the last tool available to detainees to protest their incarceration.

"The idea of forcing people to eat so that we can detain them indefinitely is extremely problematic," Daloisio said.

Jack Downey, assistant professor of religion at LaSalle University in Philadelphia who has studied Catholic social teaching and its relation to human rights, agreed. He compared holding the 86 cleared detainees to keeping a suspect in a domestic crime behind bars without evidence.

"People (Americans) should be concerned with what kind of precedence that sets for us on an international scale," he told CNS.

At a rally Wednesday in front of the White House, U.N. International Day in Support of Victims of Torture, about 250 people from human rights and political organizations called upon Obama to follow through on his pledge if for no other reason than to uphold the dignity of the detainees.

The Rev. Richard Kilmer, executive director of the National Religious Campaign Against Torture, told the rally participants that the day serves as a "reminder to the world to provide care and healing to victims of torture."

He said Guantanamo, which accepted its first detainees in January 2002, "remains an open wound, a symbol of the violation of our nation's deepest values. Though President Obama has reiterated his commitment during his May 23 speech ... to close the detention center, we have to walk every step of the way with the president to ensure that Guantanamo is closed."

Legislative relief for closing Guantanamo seems distant. While the Senate Armed Services Committee approved a bill Monday that would relax legal restrictions on the transfer of detainees, the House of Representatives' version of the defense spending bill prohibits Guantanamo's closure. Republican supporters of the House measure said they fear that bringing accused terrorists onto U.S. soil would place the country at enormous risk.

Pates, however, stressed repeatedly in an interview from South America where he was traveling on a USCCB fact-finding trip that the rights of an individual to face trial on charges must be upheld for the remaining 86 detainees. "We're not trying to justify terrorism," he said. "The rule of law has to prevail."