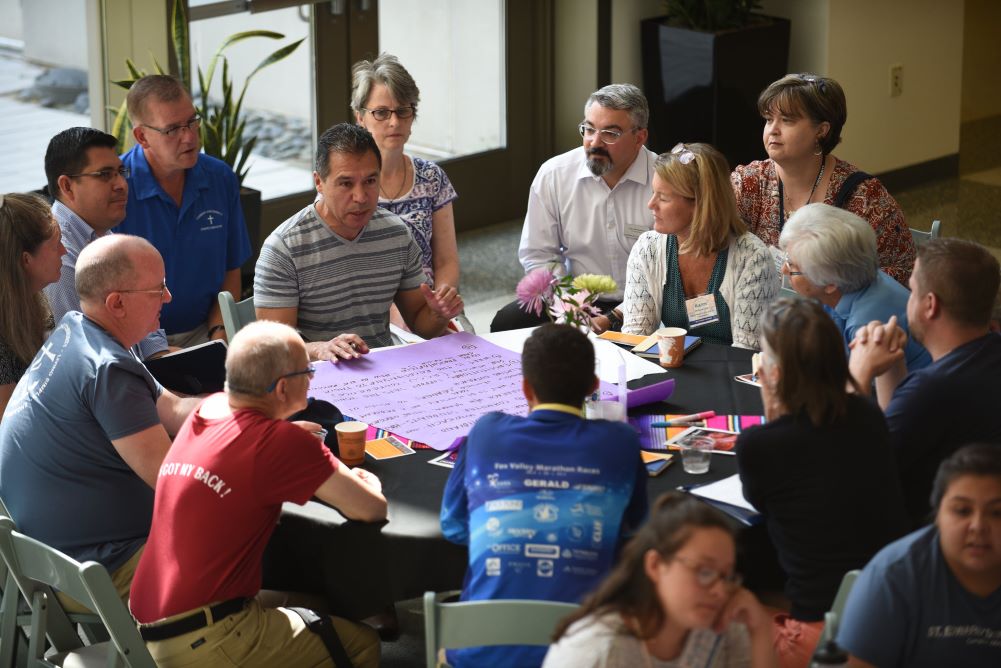 Organizers discuss Dominican University's "¡El Futuro is Here!: Cuentos y Recuerdos for the Journey." The Aug. 3 to 5 virtual conference aims to highlight the contributions and experiences of the Latinx community in the U.S. Catholic Church. (Courtesy of Dominican University)

As part of that change, Dominican University will host a conference Aug. 3 to 5 via Zoom that brings together campus ministers, university mission officers, student leaders and faculty in religious studies departments. Following an inaugural event in 2018, this year's event — titled "¡El Futuro is Here!: Cuentos y Recuerdos for the Journey" — will explore ways to understand and appreciate the cultures of Latinx students and how to continue making Latinx students a priority.

According to a university document from 2020, Hispanics make up 49% of Dominican’s student population.

While DeCostanza believes that the original model for campus ministry was centered on white, suburban and relatively affluent Catholic students, he describes the population at Dominican University in River Forest, Illinois, as more than half first-generation college students from working-class families.

Many of those students have multiple life commitments. In addition to being students, some work 20 to 30 hours a week and others are primary caregivers for family members.

"A lot of my personal time has been watching my sister, she's 10, while my parents are at work," Natalia Prato, a junior psychology major at Dominican and one the conference's student leaders, told NCR.

DeCostanza had reached out to Prato to write a prayer for the upcoming conference.

Prato describes her prayer as a combination of Spanish lullaby references she grew up with and mourning what it means to be Latino in light of colonization and migration.

"It was cathartic trying to marry all these aspects of my identity," she said.

Prato, who is Colombian, said she is excited to witness the diversity of the Latinx community at "¡El Futuro is Here!"

Jeanette Rodriguez, one of the keynote speakers and director of the Institute for Catholic Thought and Culture and professor of theological studies at Seattle University, agrees it is important to highlight the diversity of the Latinx community.

"The reality is there are about 23-plus countries that you can have roots in. We are not a monolithic group. We can try and lift that up," Rodriguez added.

Organizers say the conference will highlight the contributions of the Latinx community, a community that too often falls by the wayside. They hope to build a space created by Latinx folks for Latinx folks to articulate ways to minister more effectively to the community.

DeCostanza hopes it will help build a coalition of people who want to center Latinx experiences.

"These experiences have been part of this country for over 500 years but have been marginalized by the U.S. Catholic narrative," he said.

Rodriguez believes that both the country and the church will rise or fall depending on their investment in the Latinx community, a community she believes is holding up the church.

"It's always been a challenge on the part of the church to be innovative. The more we can prepare educators and ministers for both the complexity and diversity of the Latino community, the better served they are," stated Rodriguez who, "as a Vatican II baby knows how important it is to respond to the signs of the times."

Registration for this event can be found here.