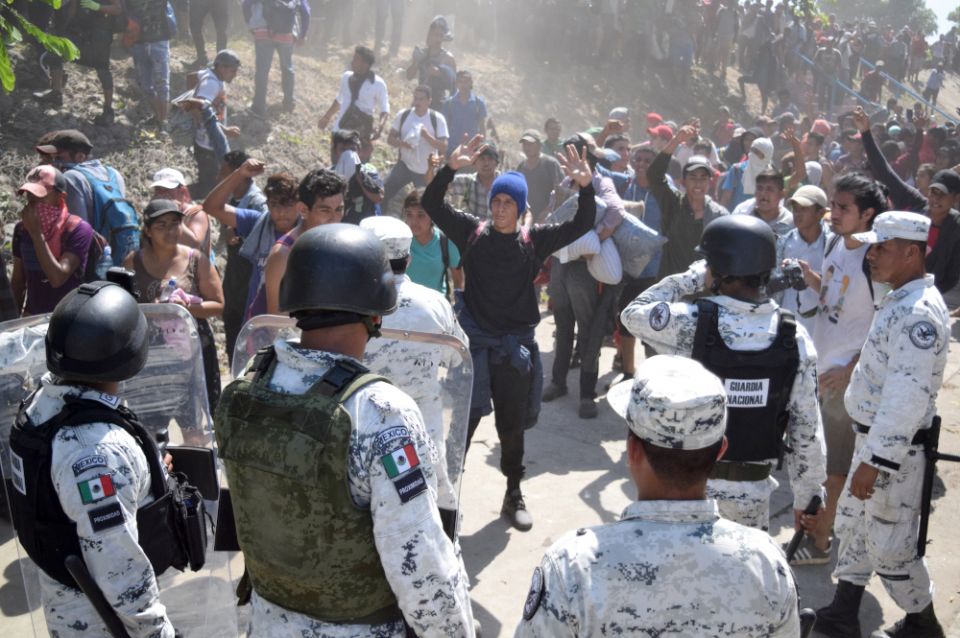 Members of Mexico's National Guard block migrants in Ciudad Hidalgo, part of a caravan traveling to the United States near the border between Guatemala and Mexico. Hundreds of Central American migrants waded across the Suchiate River into southern Mexico in a new test of U.S. President Donald Trump's Central America strategy to keep them away from the U.S. border. (CNS/Reuters/Jose Torres)

Mexico City — The secretary-general of the Mexican bishops' conference expressed dismay at the sight of Mexican security forces scuffling with a caravan of Central American migrants trying to enter the country via its southern border with Guatemala.

"We make a strong call for the (National Immigration Institute) and the (National Guard) to carry out its work respecting the dignity and (human rights) of migrants, avoiding all aggression and damages (against) these brothers, whose only crime is seeking a better life," tweeted Auxiliary Bishop Alfonso Miranda Guardiola of Monterrey.

Hundreds of caravan travelers forded the Suchiate River, which separates Mexico and Guatemala, Jan. 20, only to be rebuffed by members of Mexico's National Guard, who used tear gas on the migrants, along with physical force.

The actions reflected Mexico's increasingly robust response to migrants arriving at its southern border, including Central American caravans, which are being thwarted upon entering the country.

Lopez Obrador told reporters Jan. 21 that the National Guard's task was to "apply the law without violating human rights. That is what we did."

Mexican officials said the most recent caravan of travelers could apply for asylum in Mexico, enroll in government employment programs or take advantage of a repatriation offer.

The Guatemala government said 4,000 migrants had entered the country as part of the caravan, which originated in San Pedro Sula, Honduras.

Caravans previously crossed Mexico, taking thousands of travelers to the U.S. border and raising the ire of U.S. President Donald Trump, who accused Mexico of "doing nothing."

Trump threatened to slap tariffs on Mexican imports in June 2019 and not lift them until transmigration through Mexico ceased.

Mexico has since sent its National Guard to stop migrants, diverting security resources as violence consumes parts of the country and the homicide rate soars. The Mexican government has agreed to a plan known as Migrant Protection Protocols, which requires asylum-seekers to wait in Mexican border cities while their cases are heard in U.S. courts.

"Regrettably, Mexico responded to the interests of the United States and its anti-immigrant policies," said a Jan. 21 statement from the Diocese of Nuevo Laredo, which serves a violent border city opposite Laredo, Texas. Migrants sent to await their asylum hearings have been kidnapped and extorted by drug cartel thugs.

"Mexico has moved from being a home with open doors ... to policies of unprecedented retention and control," said the statement, signed by Bishop Enrique Sanchez Martinez and Scalabrinian Father Julio Lopez, director of the Nazareth migrant shelter. "It's been evident that the measures the Mexican government has taken have been the product of pressure from the neighbor to the north."

Mexican attitudes toward caravans and migration have deteriorated over the past year, according to polls, though the Catholic Church has voiced support and urged compassion toward those arriving.

The Diocese of Tapachula, which borders Guatemala, prepared its parishes to receive the caravan.

"Let's ensure these brother migrants don't lack bread ... don't receive looks of rejection and scorn and, in spite of such adverse circumstances, walk among brothers and sisters," not as foreigners, criminals or exiles, Bishop Jaime Calderon of Tapachula said in a Jan. 17 statement.

"God will reward each one's efforts to see, feel and treat them as brothers, just as we would like our irregular countrymen in the United States to be treated."

Few Catholic leaders in Central America expressed surprise that another caravan would form, even though migrants know the risks of the road and the increasing difficulties in traveling through Mexico and applying for asylum in the United States.

"Everyone knows it's not easy to enter the United States. The chances are overwhelming of not entering, but everyone hopes that they're the persons to enter," said Father German Calix, director of Caritas Honduras.

"People are fleeing what we consider pretty intolerable conditions ... related to lack of opportunity, poverty and violence," added Conor Walsh, country representative in Honduras for Catholic Relief Services. "It's a toxic cocktail, and people feel they don't have any other option."