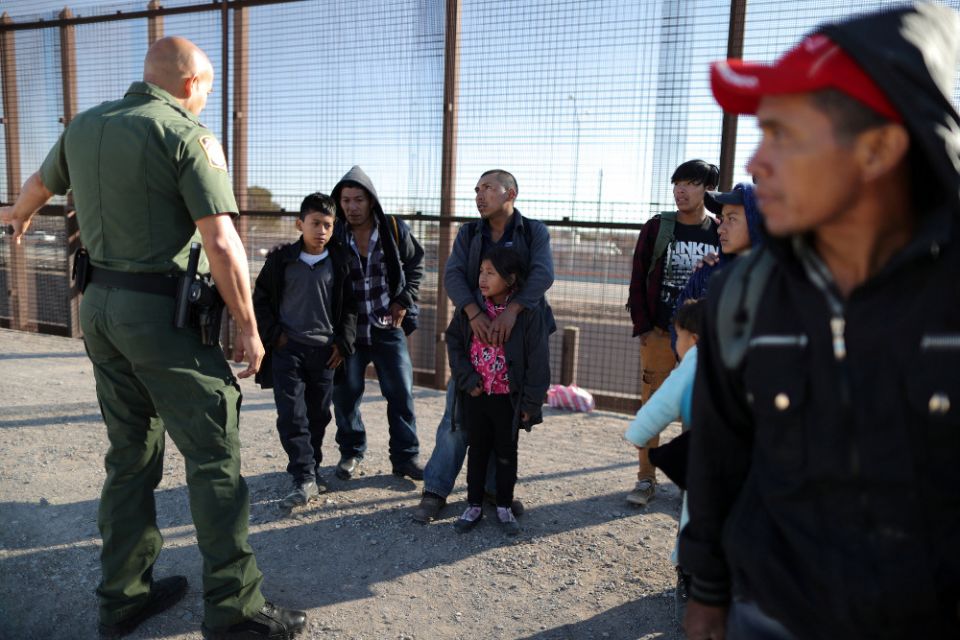 A group of Central American migrants is questioned about their children's health after surrendering to U.S. Border Patrol agents south of the U.S.-Mexico border fence in El Paso, Texas, March 6, 2019. (CNS/Lucy Nicholson, Reuters)

Washington — Catholic immigration advocates raised concerns about a proposal from President Donald Trump that would reshape U.S. immigration policy to incorporate a "merit-based" system that prioritizes high-skilled workers over those with family already in the country.

Advocates' concerns about the Trump plan, announced May 16 at the White House, focused on family unification, strengthening the asylum system and the importance of welcoming people of diverse economic backgrounds and skills.

"Families are the foundation of our faith, our society, our history and our immigration system," Cardinal Daniel DiNardo of Galveston-Houston, bishops' conference president, and Bishop Joe Vásquez of Austin, Texas, chairman of the bishop's Committee on Migration, said in a May 17 statement.

The leaders said they were troubled that the president's proposal failed to address young undocumented immigrants who were brought to the U.S. as children, known as "Dreamers," as well as temporary protected status holders from several troubled countries.

DiNardo and Vásquez said they recognized the importance of ensuring secure borders and safety, but they cautioned the neither will be achieved "by heightening human misery and restricting access to lawful protection in an attempt to deter vulnerable asylum-seeking families and children."

They also called for the U.S. to address the causes of migration and to improve operation of immigration courts that hear asylum cases, expanding alternatives to detention and eliminating criminal networks.

Kevin Appleby, a longtime immigration advocate who formerly worked at the bishops' conference, told Catholic News Service that there was little in the president's plan "from a Catholic perspective to support."

"Substantively, it cuts against Catholic teaching. It weakens immigrant families by reducing family visas, and it removes asylum protection for unaccompanied children and families at the border," Appleby said.

"The administration could increase merit-based visas without sacrificing other parts of the legal immigration system," he said. "This is really also an attack on families. They want to remove the ability of family members moving forward."

Appleby suggested there may be a place for merit-based immigration, but "it has to be part of a broader system that includes other skill categories and keeps families together."

On social media, the Catholic Legal Immigration Network offered a brief comment, posting that "family reunification has historically been the principle goal — and strength — of U.S. immigration law and policy. It should continue to be the basis of any revision of immigration law."

Trump's plan would require broad changes in current law. Congressional observers expect it to see some revisions as it is discussed in Congress.

Details of the plan were circulating on Capitol Hill prior to Trump's announcement, leading Congress members of both parties to express skepticism about some provisions. The proposal is unlikely to pass the Democrat-controlled House of Representatives.

Calling current immigration law "senseless," Trump said the plan would not change the number of annually allocated green cards, which allow people to work permanently in the country — about 1.1 million — but calls instead for them to be issued to high-skilled workers. Applicants would be considered based on age, English-speaking ability, education and job offers, he said.

"Our proposal is pro-American, pro-immigrant and pro-worker," Trump said. "It's just common sense."

The president also said his plan would reform the current asylum system to focus on immigrants who file "legitimate" claims rather than those who are seeking to enter the U.S. for "frivolous" reasons.

Trump told supporters during his 30-minute speech that the plan would keep U.S. communities safe and would ensure that the border with Mexico "will be finally fully and totally secure."

"If adopted, our plan will transform America's immigration system into the pride of our nation and the envy of the modern world," he said.

Notably, the plan does not address the situation of Dreamers, the young people who qualify to remain in the country under the Deferred Action for Childhood Arrivals, or DACA.

White House press secretary Sarah Sanders told reporters May 16 that young immigrants were omitted from the plan because the issue was considered too divisive.

Georgetown: Anti-Muslim rhetoric linked with increased violence to US Muslims