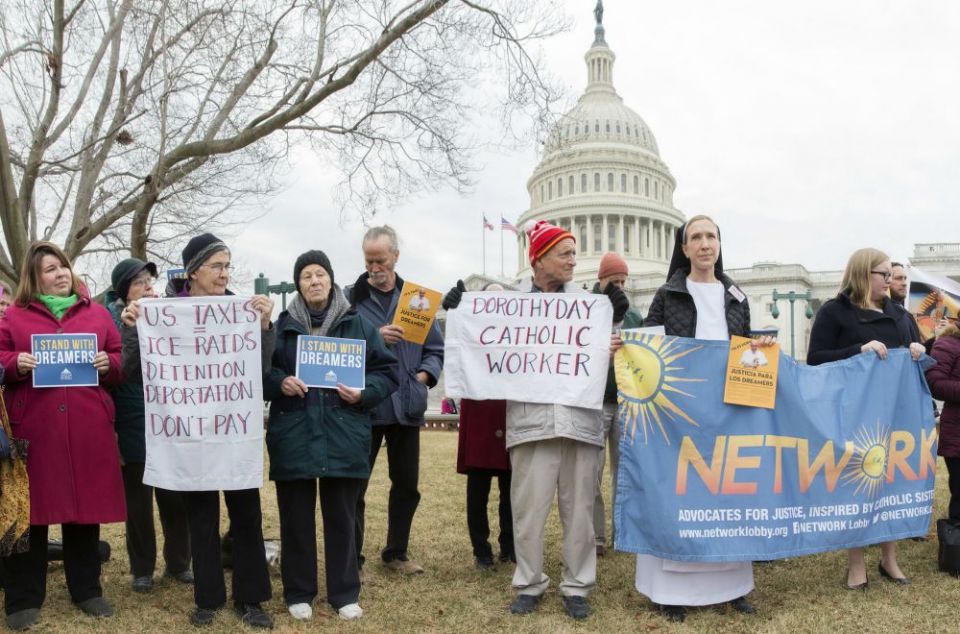 Young immigrants and their supporters gather outside of the U.S. Capitol Feb. 6 to pray for recipients of the Deferred Action for Childhood Arrivals program, who face an uncertain fate as the DACA program is set to end March 5. (CNS/Catholic Standard/Jaclyn Lippelmann)

As the Senate begins an open-ended debate about immigration, Catholic advocates will be hoping not only for a deal that protects people with Deferred Action for Childhood Arrivals status (also known as Dreamers) without harming other immigrants, but also for indications that Congress can eventually tackle other deep-seated issues with the U.S. immigration system.

"We need to be mindful that the Dreamers need and deserve a solution but that there are other undocumented persons in the country who have been here for years … that also need a solution," said Kevin Appleby, senior director of international migration policy for the Center for Migration Studies. "We can't lose sight of that in our advocacy."

For Catholic advocates, this means opposing efforts to make anti-immigrant measures a condition of protecting Dreamers, and promoting comprehensive immigration reform that is in accord with Catholic social teaching.

About 15 years ago, the U.S. Conference of Catholic Bishops issued a joint letter with the Mexican bishops' conference titled "Strangers No Longer: Together on the Journey of Hope," that outlined Catholic principles related to migration and comprehensive immigration reform.

A key part of the bishops' list of policy proposals was an earned path to legal status for the estimated 11 million undocumented immigrants currently living in the U.S.

Only about two million of them would qualify for status under a Dream Act, said Appleby. "There are millions of others that will be left out in the cold under any deal for the Dreamers, and we need to keep pressing to get a solution for them."

Other proposals included reducing wait times for family-based immigration, which can range from two years to more than two decades; creating employment-based legal immigration paths; and ensuring humane treatment and due process in immigration enforcement.

Together, these reforms could provide a sort of "re-set" for the system, said Appleby, bringing undocumented immigrants "out of the shadows" and creating incentives for people to immigrate legally, particularly by ensuring that pathways actually exist for the workers of various skill levels that our economy needs.

"We can use our rhetoric to blame immigrants for our social ills," said Appleby, "but the fact of the matter is a lot of these immigrants are important to the health of the economy, and we're refusing to give them the legal protections that their rights call for."

The bishops' letter also points out that people have the right to find opportunities in their home countries and the right to migrate if they cannot do so or if they are fleeing violence or persecution.

For the Sisters of Mercy of the Americas, this is a key point. Jean Stokan, justice coordinator of the sisters' Institute Justice Team, said a focus on "root causes" was a hallmark of the order's immigration advocacy, noting how U.S. policy contributed to conditions such as violence and poverty that push people out of their home countries.

The U.S. should focus on responding to the real needs of other countries, Stokan said, and should also stop militarizing the U.S.-Mexico and Mexico-Guatemala borders.

"It's just this effort to keep people in their furnaces of violence without recognizing true claims for asylum," Stokan said, later adding that "reasonable border security is fine" if it comes with "oversight and accountability."

Catholic social teaching supports the right of nations to control their borders and impose conditions on immigrants, said Chad Marzen, an attorney and professor at Florida State University, but that right is balanced with the right of individuals to migrate when necessary and the duty for countries to welcome immigrants when possible.

Marzen spoke with NCR alongside William Woodyard, also an attorney and Florida State professor, who collaborated with him on a paper about immigration reform and Catholic social teaching. The paper aims to balance two "strands" of thought in Catholic social teaching and U.S. politics: the right of nations to control their borders and the right of individuals to immigrate.

According to Appleby, U.S. lawmakers have failed to reach such a balance even though people on all sides of the immigration debate agree that "the system is broken and needs to be fixed."

"My concern is that Trump has been successful in narrowing what is on the table — because a broad legalization hasn't been discussed or even mentioned, that it might not be even viable in the future."

The most recent compromise attempt, supported by the bishops with some reservations, provided for increased border enforcement, a pathway to legal status for undocumented immigrants, asylum reforms, and changes to employment-based and family-based immigration. It passed the Senate in 2013 but was not taken up by the House.

Today, it seems even less possible to reach a broad consensus on immigration.

"It's increasingly clear that it's very hard to Congress to come down on any sort of agreement on the Dreamers, let alone a comprehensive program," said Ashley Feasley, policy director for the U.S. bishops' Migration and Refugee Services.

"I don't know if we'll ever come to a point where we come to a broad agreement," said Appleby. "We might have to do it in little pieces. … It might be too much to overhaul the whole system with one or two votes."

"My concern is that Trump has been successful in narrowing what is on the table — because a broad legalization hasn't been discussed or even mentioned, that it might not be even viable in the future," he added. "I am a bit concerned that advocates have not kept talking about the need to bring everyone out of the shadows, not just the Dreamers."

However, Marzen drew some hope from the increased discussion of immigration issues while Appleby and Feasley suggested that reaching a successful compromise on the Dream Act could open the way for other reforms.

"Long-term, the fact that these issues are being discussed in the public sphere I think, ultimately, is a good thing," said Marzen. "As long as this issue remains at the forefront of the media and of the political discussion, I think there is that chance for a broader immigration reform package to be passed."

"The continued negotiation on Dreamers is a real test for Congress in terms of: can they put together a deal that protects Dreamers and respects human dignity and due process?" said Feasley. "It will be important to see how they handle this situation."

"If we can get a smaller package, for example, helping the Dreamers, maybe with some border enhancements, and get that through, it could pave the way for a broader debate on the wider issues," said Appleby.

Appleby emphasized that Congress must find some solution for undocumented immigrants already in the U.S.

"We're not going to deport all of them," he said. "We might try or we might say we are, but that's not going to happen. That's what I would say: keep in mind that there are millions of others that will be left out in the cold under any deal for the Dreamers and that we need to keep pressing to get a solution for them."

"The bishops remain committed to immigration reform, in part because they see the day to day need in their dioceses and in parishes for reform," said Feasley. "Right now we're in a moment that is focused on the Dreamers … but the bishops are going to continue to advocate for immigration reform because the entire system needs to be updated and reformed to deal with our realities of today."

Justice | Immigration reform is not just about 'Dreamers,' advocates say