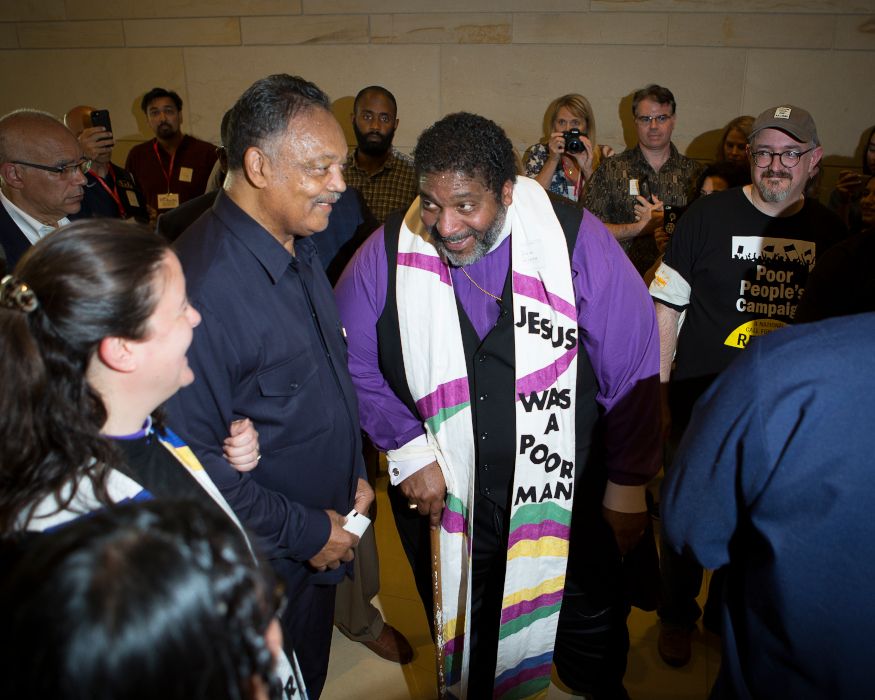 Rev. William Barber II, in purple, pastor of Greenleaf Christian Church in Goldsboro, North Carolina, who is co-chair of the Poor People's Campaign, is seen in a 2018 file photo. During the inaugural prayer service, Barber prayed for an end to systemic racism and economic inequality. (CNS/Tyler Orsburn)

Washington — During the traditional inaugural prayer service hosted by the Washington National Cathedral — virtual this year because of the pandemic — faith leaders from around the country prayed for the nation and its leaders, especially President Joe Biden and Vice President Kamala Harris, who were watching the Jan. 21 event at the White House.

Over 30 faith leaders who joined the hourlong service by video also prayed for members of Congress, the nation's front-line workers, victims of COVID-19 and peace. The event included two Old Testament readings and a reading from the Quran along with Patti LaBelle singing "The Star-Spangled Banner" and Josh Groban signing "America the Beautiful."

The service was not just a petition for blessings. It also featured a fiery sermon delivered by the Rev. William J. Barber II, civil rights leader, who urged the nation's leaders and its citizens to step forward and "repair the breach" between people of different races and economic backgrounds.

"If we want to come out of this jam and move forward together, we cannot accept the racial disparities, violence, and breaches that impact Black, brown, Native and Asian Americans," said the pastor of Greenleaf Christian Church in Goldsboro, North Carolina, who is co-chair of the Poor People's Campaign: A National Call for Moral Revival.

He stressed that more had to be done to get the country out of its current state that showed itself weeks ago in the siege of the U.S. Capitol, which he said was the result of a long history of political division.

"We can't accept the poverty and low wealth of 140 million Americans before COVID-19 and many more millions since," he added, stressing that Americans and their leaders must address "systemic racism, poverty, ecological devastation, denial of health care, the war economy and the false moral narrative of religious nationalism."

He closed his remarks by praying for wisdom and courage for leaders and those working for racial and economic justice.

Two women religious who have been at the forefront of caring for immigrants and providing accessible health care joined faith leaders who offered short prayers during the service.

Sr. Carol Keehan, a Daughter of Charity, who was president and CEO of the Catholic Health Association from 2005 to 2019, prayed that members of Congress would "hear the people's voice and be led to enact laws for the common good and the protection of the most vulnerable." 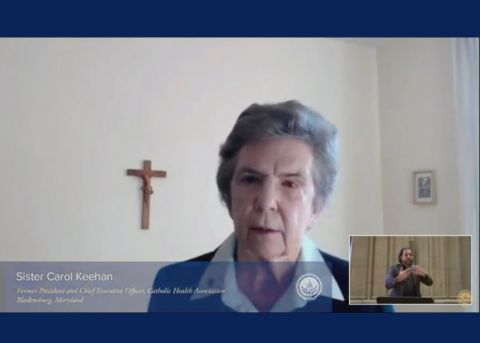 This is a screen grab of Sr. Carol Keehan, a Daughter of Charity and former president and CEO of the Catholic Health Association, who was participating in a virtual presidential inaugural prayer service hosted by the Washington National Cathedral Jan. 21, 2021. (CNS screen grab)

The sister, who worked hard behind the scenes to help craft the language of the Affordable Care Act passed by President Barack Obama in 2010, also prayed that Congress would be given the "courage and foresight to work together to serve the people of this nation faithfully, and to fulfill our obligations in the community of nations."

"Keep this nation under your care," she added.

For the past three decades, Pimentel, the daughter of Mexican immigrants, has been supporting over 100,000 migrants seeking refuge in the U.S. along Texas' border with Mexico with emergency food, shelter, housing assistance, clinical counseling and pregnancy care.

After the service, she tweeted that she was privileged to lead this particular prayer and said she was blessed for the opportunity to use her voice "to help bring healing to hearts hurting because of division & exclusion." She also said she hoped people would take the "words of St. Francis to heart — be instruments of peace."

The same prayer also was quoted by Biden in a Dec. 14 address when the Electoral College officially confirmed his victory in the 2020 presidential election. In his speech, he urged people to look to the future with the words of the prayer of St. Francis in mind: "Where there is doubt, faith. Where there is darkness, light."

Participants watching the inaugural prayer service had opportunities to join in prayer when asked to say the Lord's Prayer together and to have a moment of silence for those who have lost their lives in the COVID-19 pandemic.

A closing blessing was offered by Episcopal Bishop Michael Bruce Curry of Raleigh, North Carolina, who urged participants to "go forth into the world in peace. Be strong and of good courage."

With an upright hand in prayer, he added: "May God hold us all in those almighty hands of love."

Over 30 faith leaders who joined the online service prayed for President Joe Biden, members of Congress, the nation's front-line workers, victims of COVID-19 and social justice.