Interfaith Worker Justice closes, to give resources to Georgetown arm 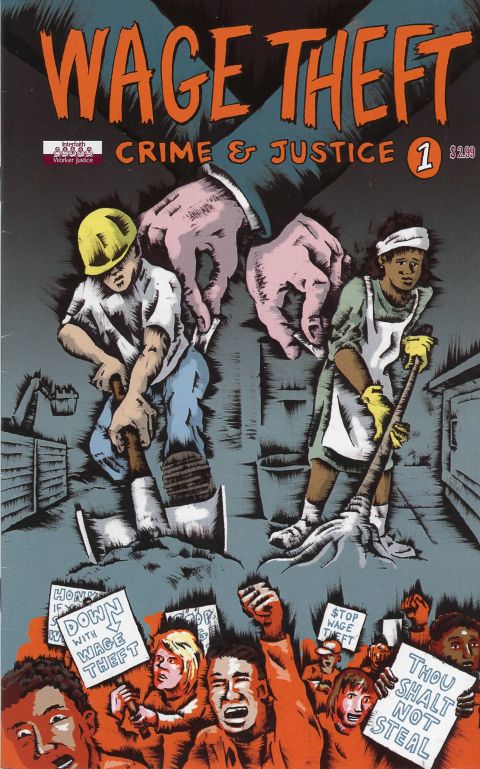 This is the cover of the comic book "Wage Theft: Crime and Justice." Feb. 9, 2015. (CNS/Interfaith Worker Justice)

Washington —  Interfaith Worker Justice announced Dec. 31 that it was shutting down at the end of that day.

The announcement came from Kim Bobo, who founded the organization in 1996.

Interfaith Worker Justice can list several accomplishments in its 25 years.

Perhaps most important among them was putting the term "wage theft" in the American lexicon. Bobo wrote "Wage Theft in America" in 2008, and it set off an outpouring of complaints from other workers who had also been shortchanged by their bosses.

"We got literally thousands of people of faith realizing this is a huge problem in the country," Bobo said, "standing with worker centers both in terms of direct-action stuff but also in passing laws across the country to strengthen enforcement."

That led, she added, to another achievement: "some really good relationships between unions and faith communities. There are a lot of these local religion-labor coalitions — some predate Interfaith Worker Justice — but there is a grassroots network that didn't exist prior."

Interfaith Worker Justice also built a network of worker centers in cities throughout the United States. The other $200,000 of its reserves will be distributed to some of the individual worker centers and to the network that was formed on its behalf.

"I think the number two problem was they ended up, frankly, getting some pretty cantankerous people on the board and there kind of became a war between the worker center board members and the faith leaders board members. It was a mess. I wasn't there; that's what I heard," she said.

Bobo is now the director of the Virginia Interfaith Center for Public Policy, based in Richmond.

"When you've got the staff a mess and the board a mess, it's hard to move forward," she said. "The religious folks on the board felt it was the best thing to do to close it down."

In her Dec. 31 message, she acknowledged the help of "giants" who encouraged her, among them two of the U.S. church's foremost labor priests, Msgr. George Higgins and Msgr. John Egan.

Formed in 2020, the Interfaith Network for Worker Solidarity counts two Catholic organizations in its membership: the Catholic Labor Network and the Association of U.S. Catholic Priests.

In a 2009 address at the Catholic Labor Network's annual meeting, shortly after "Wage Theft in America" had been published, Bobo recalled one time when she was eating at one of her favorite restaurants in her native Chicago and realized she did not have enough cash to pay the bill.

When she showed the server a credit card and asked, "If I put this (tip) on the bill, will you get it?" The server replied "No."

"I had the same experience a week ago at a restaurant at the holidays," Bobo told CNS Jan. 4. "This one said, 'no, it'd be better if you gave it in cash.'"