More than 100 people gather for demonstration 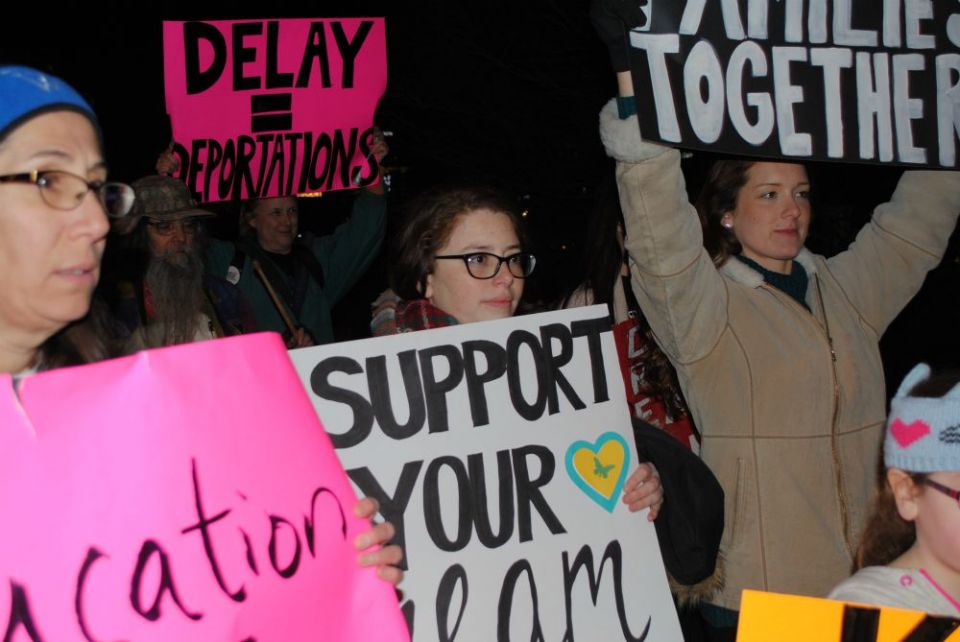 Kansas City, Mo. — Carmelita's mother still has the voicemail her daughter left her, crying, when she found out President Barack Obama had created the Deferred Action for Childhood Arrivals (DACA) program to protect her and other Dreamers — young undocumented immigrants who were brought to the U.S. as children.

"For me, it meant the world," said Carmelita, who asked to be identified by her first name only due to safety concerns. "I was able to work, I was able to drive … it brought out that hope that you could just be yourself and not have to worry."

Faced with President Donald Trump's attempt to terminate the program that brought Carmelita and about 700,000 others increased security and opportunity, the Kansas Missouri Dream Alliance recently partnered with several other organizations to lead a Dream Act Now march March 2 in Kansas City, Missouri, to promote protection for Dreamers.

Meeting in a park at the intersection of East 18th Street and Grand Boulevard, more than 100 people gathered to listen to testimony from Dreamers and supporters before marching to the 18 Broadway Urban Garden, pausing for more speeches, then marching back to the original location.

Carrying signs and a large banner, painted right before the event, that read, "Families Stay Together," the marchers walked through Kansas City's monthly arts event, First Fridays, as they chanted slogans including, "They say go back; we say fight back," and "undocumented, unafraid." 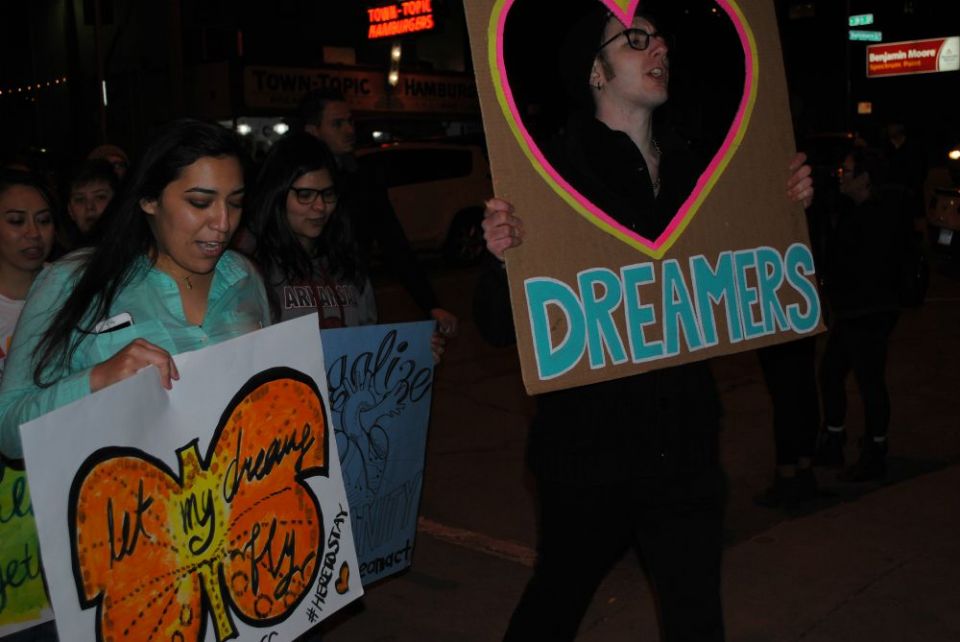 Speakers included several DACA recipients, Eduardo Mendez, the teenage son of Crecensio Mendez Ramirez, who was detained by Immigration and Customs Enforcement Feb. 7, and representatives of community organizations such as KC for Refugees founder Sophia Kahn, a Pakistani-born physician.

Event leaders emphasized solidarity and membership in one human family, at one point asking everyone in the crowd to hug the nearest person. Speakers, organizers and participants said they hoped that the event's message of support for Dreamers would reach both elected officials and the general public.

Although the DACA program was scheduled to end March 5, challenges in the courts have led to injunctions that will allow those who already have DACA to continue to hold and renew their status, which grants them work authorization and protection from deportation, until the case is resolved.

This still leaves DACA recipients in a state of uncertainty that permanent legislative protection, such as a path to citizenship, would resolve. Congress has so far failed to reach a compromise protecting Dreamers, partially because Trump and some lawmakers would like to pair that protection with cuts to legal immigration and border security funding, while others support a "clean" bill that focuses solely on Dreamers.

"Don't be afraid to call them," said Delphine Nkweti of the University of Missouri Kansas City social work school, urging participants to contact their elected representatives. "Stalk them on Facebook!" she said, using the popular term for closely following a social media account. "Go to their Facebook pages and tell them we are here to stay."

"Every day, 122 DACA recipients are stripped from their status" and "in danger of being separated from our families and removed from a country we call home," said Ana, a Dreamer who has been in the U.S. for 15 years and prefers not to share her last name, explaining the meaning of 122 candles organizers distributed to participants.

A University of Kansas student and member of the Kansas Missouri Dream Alliance, Ana told the crowd, "We cannot let Trump or [policy advisor] Steve Miller take away what we've worked very hard for."

Congress is "afraid we will run for office and take their seats," she added. "We will show them what leadership looks like" and "we will remember who stood with us and who stood against us."

"I hope that representatives are paying attention," said Carmelita, mentioning Missouri Sens. Roy Blunt and Claire McCaskill. "They haven't really done much, so I really want them to hear, from a local perspective, if they really want the vote for 2018, they really need to step it up and they need to actually listen to their constituents." 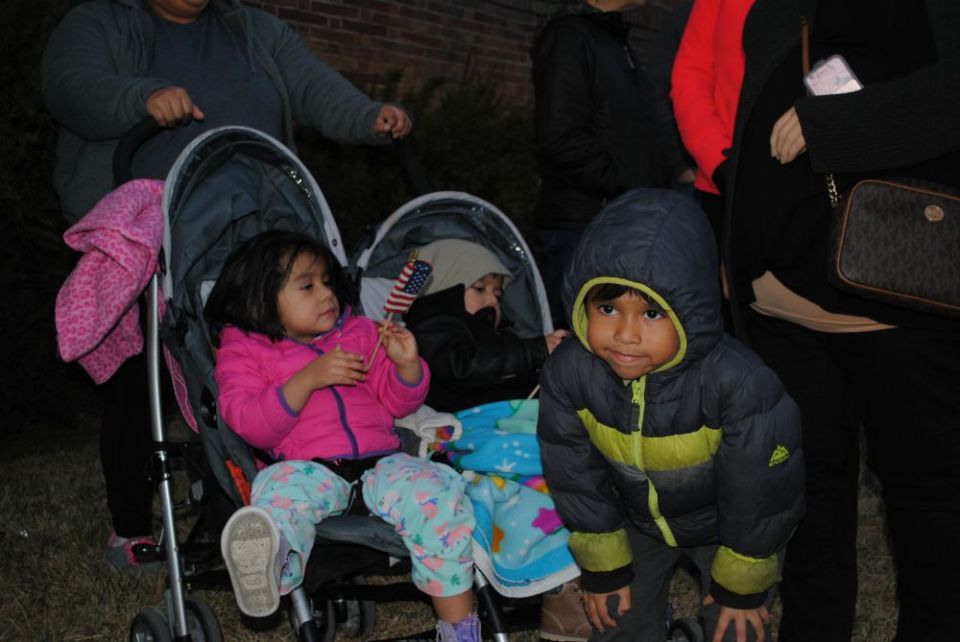 Carmelita added that she hopes the march inspires anyone who doesn't understand the DACA program to do some research. "I think a lot of people have a misperception of what DACA is. I heard some people think that we're stealing identities through DACA, which is totally not the case," she said.

"It's about everyone, even supporters, hearing about the people in their own community," said Cynthia, a Dreamer who traveled from Joplin, Missouri, with two friends, also Dreamers, to attend the march. Not everyone realizes that "people close to them, in their own communities, are Dreamers."

Art Smith, a native of Canada and a minister assigned to the Canada/Haiti/Mexico mission field for Community of Christ Church, headquartered in Independence, Missouri, told NCR he hoped by attending the event he could help support his neighbors and counteract what he saw as the prevailing attitude that "we need to be really harsh with each other."

"I just feel we need to be a lot more merciful and compassionate," he said, holding a sign that referenced both his faith and a patriotic song: "I was a stranger and you did not welcome me. Matt. 25:43 America the Beautiful loves mercy more than life."

Perhaps the most common theme from speakers was lack of fear and a determination to keep pushing for protection for Dreamers. 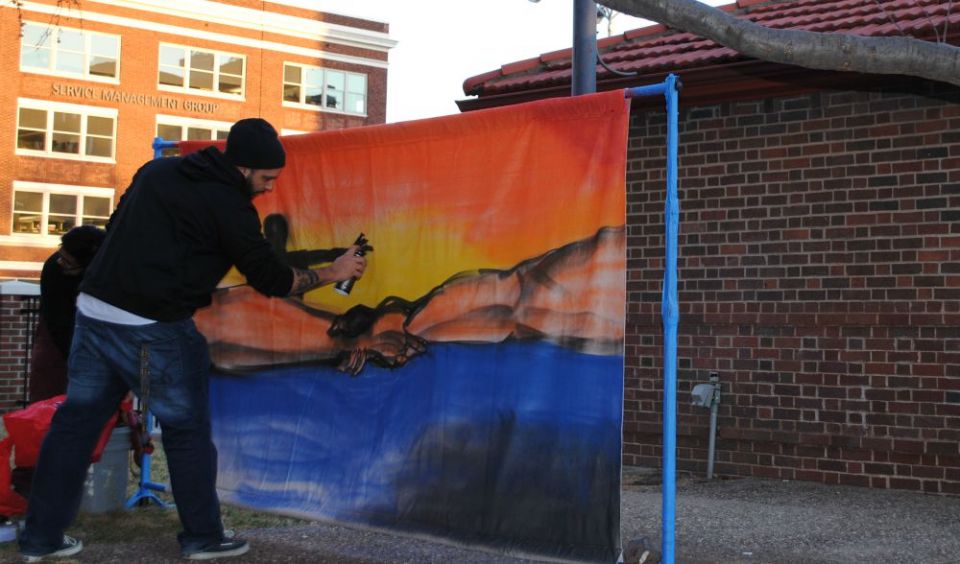 An artist works on a banner to be used in a Dream Act Now march and rally in Kansas City, Missouri March 2. (NCR photo/Maria Benevento)

"The level of love I'm receiving right now is amazing," said Alex Martinez, director of the Kansas Missouri Dream Alliance and himself a Dreamer, addressing the crowd. "I am no longer afraid. I'm sharing my story because it's the most powerful thing I have."

"We are undocumented, unafraid, and we are here to stay," Ana concluded.

[Maria Benevento is an NCR Bertelsen intern. Her email is mbenevento@ncronline.org.]

President Trump has some success working with Democrats