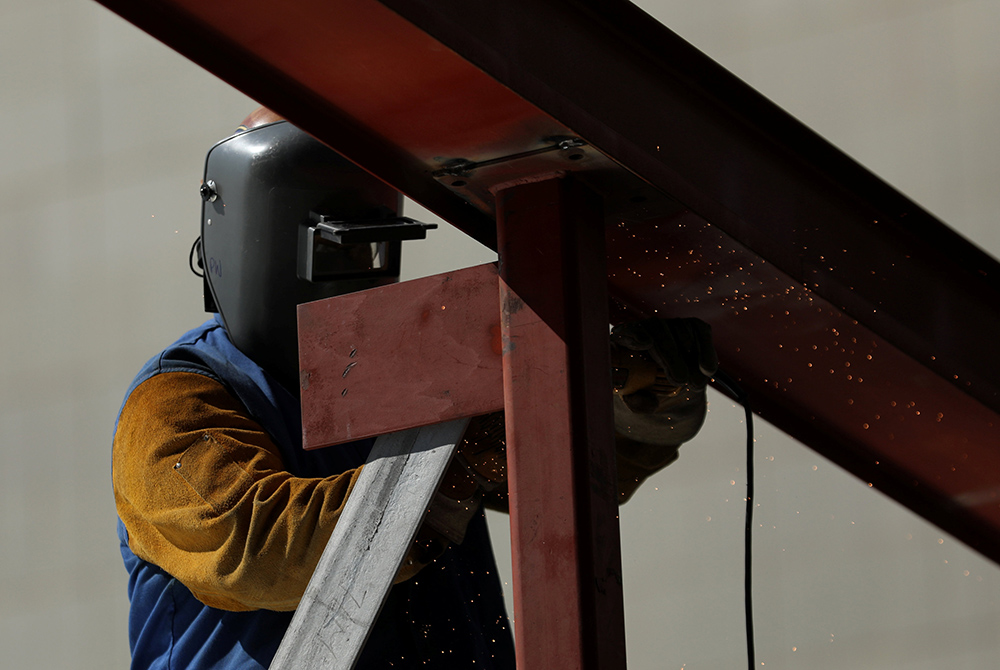 A construction worker uses a grinder on a metal beam at a construction site Aug. 10, 2017, in Los Angeles. (CNS/Reuters/Mike Blake)

Exactly what constitutes a just or living wage, one that enables workers to support themselves and their families in a way consistent with human dignity, may be open to debate.

But one element — wage theft — is clear. It's the failure to pay workers what they are legally due — it is misclassifying workers, avoiding overtime pay or requiring employees to work "off the clock."

Conversations on just wages and the economy should include such fundamentals, said Daniel Graff, director of the University of Notre Dame's Higgins Labor Program, part of the university's Center for Social Concerns.

He said it is "alarming" that it's not more front and center. "The understanding that we are our sister's and brother's keeper has atrophied."

It's especially important for faith communities to address such basic concerns now because of the lack of enforcement and the decline of unions, which traditionally protected workers' rights, Graff added. "There's a real absence. Moral communities are going to have to fill in."

A 2017 Economic Policy Institute study estimated that 2.4 million people in the United States lose a combined $8 billion in income every year to theft by their employers. Victims are likely to be young workers, women, people of color and immigrant workers who are often employed at lower-paying jobs to start with.

Members of religious social justice groups play a vital role in contesting such theft by helping these low-pay workers learn about their rights, connecting them with local enforcement agencies and advocating for stronger legal protections. 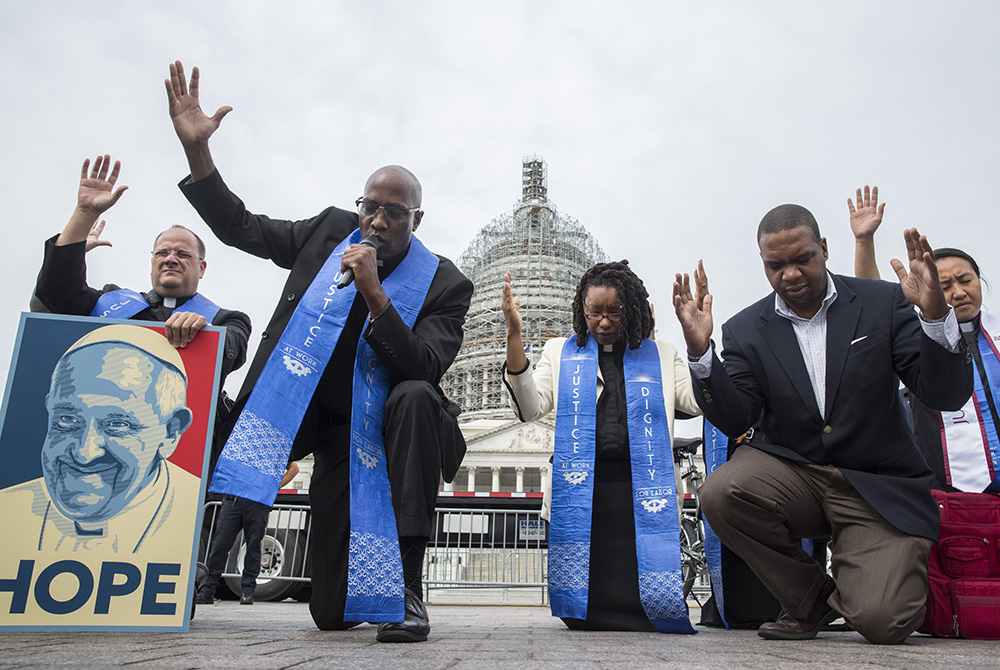 Faith leaders pray as low-wage contract workers from the U.S. Capitol and other federal buildings rally during a strike over wages Sept. 22, 2015 in Washington. The group invoked the name of Pope Francis as they demonstrated for higher pay ahead of the pontiff's arrival in the nation's capital. (CNS/Joshua Roberts)

The Virginia Interfaith Center for Public Policy has long championed legislation at the state level to strengthen the ability to investigate wage claims and to protect workers against retaliation.

These laws can be "game-changers" for workers trying to fight back, said Kim Bobo, co-executive director of the Virginia center and founding director of Interfaith Worker Justice, a national workers' rights network based in Chicago.

The biggest victory in Virginia so far came last year with a series of amendments that greatly expanded employee protections. The Wage Theft Law allows employees to sue their employers for allegedly unpaid wages. Previously, an employee could only file an administrative claim.

The law not only allows the recovery of wages owed but permits recovery of treble damages and a $1,000 civil penalty per violation. And if an employer is found to have committed a "knowing violation," a court can award attorneys' fees.

The law also carries potential criminal penalties for knowing violations and has an anti-retaliation provision.

Serious penalties motivate attorneys to take these cases, Bobo said, and "also to create a disincentive for employers to break the law."

"Church teaching emphasizes that work is more than a way to make a living. It ties in with the dignity of the human person," he said. "We have a responsibility to protect the rights of workers so that they receive a just wage and ethical working conditions."

Now, the Virginia Interfaith Center for Public Policy is getting the word out to workers about their rights and connecting them with attorneys through a website (wagetheftva.org) that declares: "Thou Shalt Not Steal."

In Washington, D.C., the Catholic Labor Network set out to investigate the prevalence of wage theft in the local commercial construction market and to document patterns within the industry.

In an extensive underground sector in the industry "workers are misclassified as independent contractors or paid in cash off the books," according to Clayton Sinyai, executive director of the network of Catholic union activists and clergy, religious and laity.

After the network's report found a strong association between this underground segment of the construction economy and wage theft, the network began working with local government officials on better enforcement.

Another way to fight wage theft is to hold church institutions themselves accountable to the moral principles outlined in the U.S. bishops' 1986 "Economic Justice for All: Pastoral Letter on Catholic Social Teaching and the U.S. Economy."

Houses of worship that undertake any type of construction or renovation need to ask hard questions of any firm they purchase services from, to make sure their workers are being paid fairly.

Houses of worship that undertake any type of construction or renovation need to ask hard questions of any firm they purchase services from, Sinyai said, to make sure their workers are being paid fairly. Look for firms that pay their workers as employees and not as independent contractors.

Churches hire employees and purchase many kinds of services from vendors, Sinyai continued, and "if I'm on the parish council I want to know about the employees who work for the parish. Make sure policies are in place, make sure workers are being paid a living wage."

One simple way to help make sure workers are treated fairly, he added, is to look for the union label because workers who have unions have an avenue for airing their grievances. "Choosing a union producer of the products you buy goes a long way."

Dioceses used to have policies that favored the use of union contractors to make sure workers were treated in accordance with Catholic social teaching, according to Sinyai.

That's usually not the case in dioceses today. But a network of Catholic college and universities, including Georgetown University (where the Catholic Labor Network is based), have adopted policies to protect the rights of university employees as well as subcontracted campus workers. 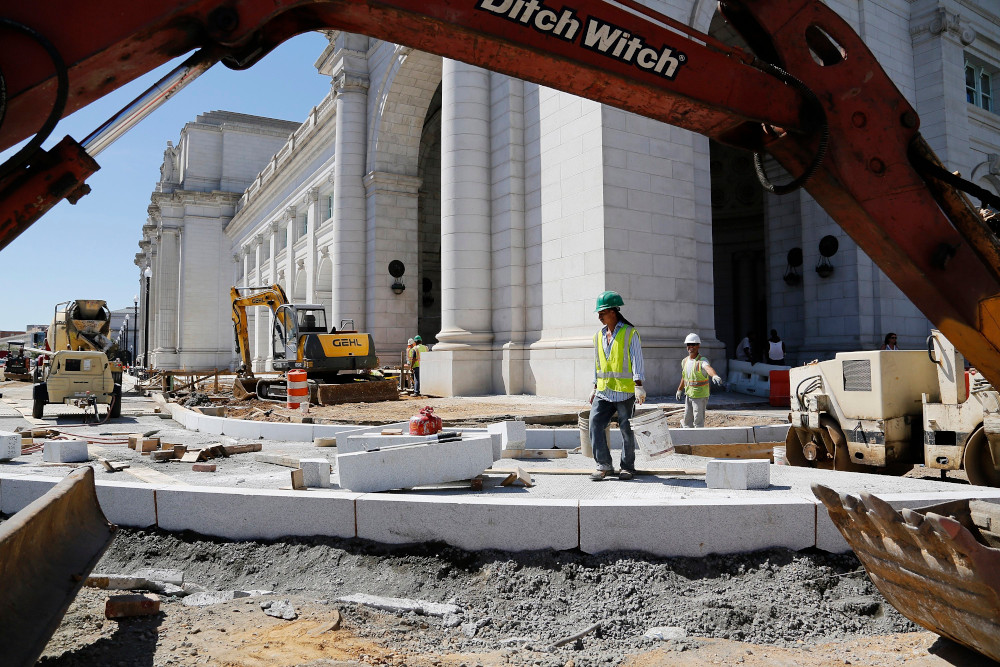 Fighting wage theft on the community and parish level can be especially effective.

A big part of building any coalition is talking directly to people about their problems and really listening to them, said Jason Lowry, an organizer with the Valley Interfaith Project based in Phoenix.

"Once you figure out what the stories are, there are all kinds of ways you can pull together people who are willing to take action on it. It needs to be truly a grassroots effort."

Such actions also help congregations rethink their role locally, he says, and allow them to "reclaim turf."

Monica Dorcey, who has been a leader with Valley Interfaith Project for 15 years, recently worked with a network of churches in Phoenix to get more low-income people vaccinated.

In general, the basic tool for reaching people, according to Dorcey, is a neighborhood walk, going door-to-door, passing out flyers, setting up house meetings. "Even the ice cream lady who goes all over the neighborhood is involved. It creates a buzz in the neighborhood" as well as generating positive publicity, she said.

"If you don't rush through it, you can have a real conversation not just about what you're interested in, but about what else is going on. You can have opportunities for people to say what's on their mind," she said.

In the case of a topic like wage theft, "it's not something people readily talk about. You have to put yourself in a position where they can open up about it," Dorcey said.

If someone has complaints about some type of wage theft, the goal would be first to help the person "share their story in a clear, concise way." Then, she suggested, a delegation of parish members might approach the individual's employer.

"Say 'We don't expect our people to be treated that way. We respectfully ask you to rectify this situation.' Make it clear that this is something we're working on and we're not going away," she said.

If that happens, she added, "Word would get around. The church might become known as a place to go" to redress injustices.

Actions by individuals also can make a difference. 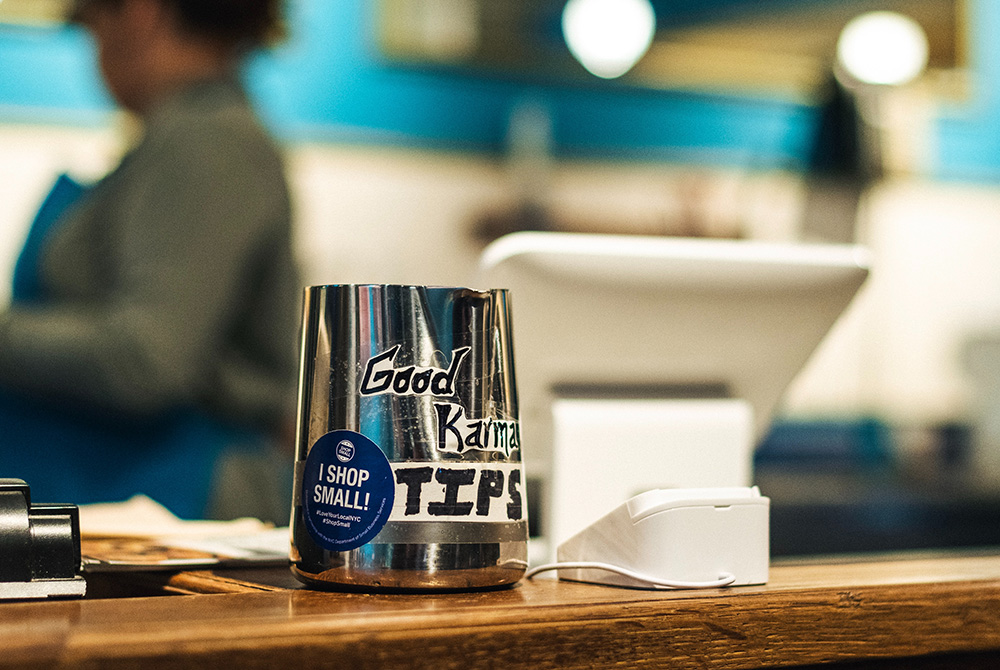 "Any time you hear somebody talk about their job — that they didn't get their last paycheck, or they aren't getting overtime — urge them to fight back and offer to help them," Bobo advised. Offer to connect them with an attorney or an activist organization.

Young people who have limited work experience are especially vulnerable, she adds. "Your kids, neighbor kids. … Young people get cheated in the workplace a lot. They get taken advantage of. We want them to stand up for their rights."

The problem is so prevalent, "that as consumers we have to ask questions or we are unwittingly contributing to wage theft," Bobo says. One way to avoid adding to the problem is to discretely ask the wait staff if they will get the tip if it is put on a credit card. If not, be prepared to tip in cash.

About 10% of tipped restaurant workers lose their tips when they are put on credit cards, she said. Checking is "one of those little things you can do. It only takes a minute. If you have food delivered, do the same thing."

And, finally, there is always prayer. "When there is a member of the community who has been a victim, who is struggling to get their money back, we can pray at their place of business," Bobo says. "We can do direct action."

[Stephenie Overman is a long-time freelance journalist who specializes in workplace and health issues. She's based in the Washington, D.C. area.]