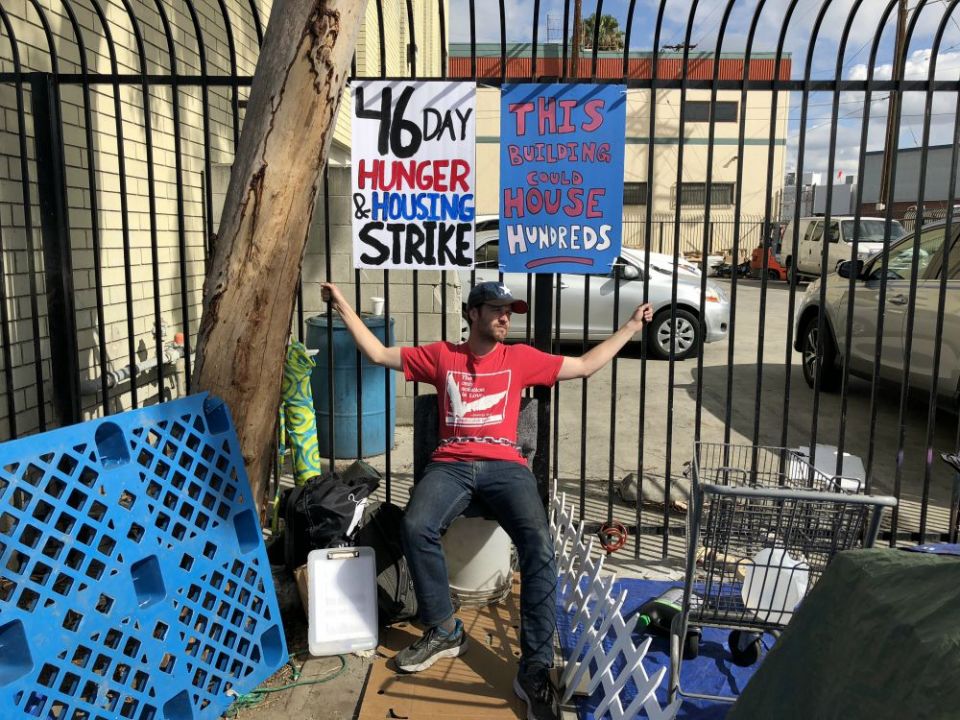 Los Angeles Catholic Worker Kaleb Havens is pictured on Ash Wednesday, Feb. 14 on the first day of his hunger and housing strike in protest of inaction on the homelessness crisis in Los Angeles. (Provided photo)

As a homelessness crisis escalates in both Los Angeles County and neighboring Orange County, California, members of Catholic Worker communities have taken action to encourage local governments and churches to respond with constructive solutions rather than criminalizing or ignoring those in need of housing.

"I want Christians to really think about the homelessness problem in their area and if they are truly fulfilling the core of Christ's message, which is to 'love thy neighbor as thyself,' " said Los Angeles Catholic Worker Kaleb Havens.

On Ash Wednesday, Feb. 14, Havens chained himself to the outside of a building and began a hunger strike which will last until Easter unless local officials meet his demands to increase available housing and services.

Meanwhile, the Orange County Catholic Worker and seven people experiencing homelessness have an ongoing lawsuit against Orange County and the cities of Orange, Costa Mesa and Anaheim, filed Jan. 29 after county officials tried to clear a large homeless encampment near the Santa Ana River.

These actions come as the number of people without housing grows rapidly in both counties. In Los Angeles County, about 58,000 people are homeless on any given night; homelessness in the city of Los Angeles has increased 49 percent since 2013, according to an LA Times editorial.

While locals recently voted to dedicate over $1 billion to supportive housing and services, some say this funding isn't being put to use quickly enough given the urgency of the crisis.

"We have the money, but the public will isn't there," Havens said. People without housing are always told to expect action in a few years, he said and have "been waiting for a long time for a solution that matches the scope of the problem."

Havens is asking officials to impose a 1 percent vacancy tax to discourage landowners from leaving their properties empty instead of using them for housing; he has also demanded "more jobs, more parks, cleaner parks, [and] more toilets."

Havens said he will end his hunger strike and allow himself to be unchained if Los Angeles Mayor Eric Garcetti and 14th District Councilmember José Huizar "intensely vocalize support for our demands." Catholic Workers attempted to deliver keys to Havens' chains to both politicians after a Feb. 14 city council meeting, although Garcetti's deputy press secretary Anna Bahr says he did not attend the meeting and never received a key.

By March 19, Huizar had visited Havens and Garcetti had called him, but Havens hadn't allowed either to unlock him.

In an email to NCR, Bahr said Garcetti shares Havens' goal and "is moved by his dedication to the cause," but is concerned about his health. She also said Garcetti's staff and Havens continue to discuss increasing faith community involvement in assisting homeless people.

"Mayor Garcetti spends more time on L.A.'s homelessness crisis than on any other issue facing the city," Bahr wrote, naming several initiatives the mayor supported or is promoting to improve housing and services.

Rick Coca, communications director and senior advisor for Huizar, said that "homelessness and solutions we need to be pursuing" are also Huizar's biggest focus.

"The shelter we're seeking needs to be identified and funded as quickly as possible," Huizar said in a statement Coca emailed to NCR. "Kaleb's hunger strike brings much-needed attention to that need."

Coca said that Havens and Huizar discussed "common ground" during their meeting March 6; Havens then helped get supporters to attend a committee meeting to promote two ordinances Huizar supports aimed at expediting the creation of permanent supportive housing.

Neither Bahr nor Coca clarified what the obstacle is to the politicians fully meeting Havens' demands and allowing him to end his strike, although Coca said Huizar is considering unlocking Havens if he is able to visit him again.

"I think the action has really done what I hoped it would, which is start this conversation at a more personal level for people," Havens said. "I'm not trying to be a martyr or anything, but I'm taking on the perils of homelessness to try to build that connection with people who might not have it already."

Havens added that he did his action during Lent because he particularly hoped to reach people of faith. He held up the Catholic Worker movement as an example of how Christians should respond to homelessness and credited the movement with immersing him in issues affecting homeless people.

Jordan Hoiberg, a member of the Orange County Catholic Worker, also said the Catholic Worker model allows him to befriend homeless people, hear about their problems, and use "that perspective to help them in ways other groups can't or won't," especially through "addressing the social justice side of homelessness."

Fewer than 5,000 people were without housing in Orange County in 2017, but that number is a 13 percent increase since 2013 and the number of homeless deaths has risen much more dramatically during that period, increasing by 64 percent.

Finding a place to sleep

Advocates like Hoiberg are particularly concerned that anti-camping ordinances in all of the county's 34 cities have effectively made homelessness a crime, pushing homeless individuals into a two-mile long encampment on county land near the Santa Ana River. At its biggest, the encampment housed 800-1,200 people because it was one of the few safe places homeless people could stay without being penalized by law enforcement or having their property seized.

When the county began its attempts to clear the camp Jan. 22, advocates worried that with no alternative housing offered, residents would be forced back into the cities where they would again be criminalized.

The core of the lawsuit filed Jan. 29 by the Orange County Catholic Worker and seven homeless individuals is that the county and cities "play this game of ping pong, trying to move homeless people around back and forth, and the tools that they use to do that are tools of criminalization which are cruel and unusual punishment," Hoiberg said.

As a result of the lawsuit, Judge David Carter granted a temporary restraining order on the camp's closure Feb. 6, which was lifted Feb. 20 after both sides reached an agreement for officials to find housing or provide motel vouchers for residents of the camp while working to create more permanent solutions.

Carter is still supervising the process to ensure that people don't end up back on the streets. Most recently, he held a March 17 hearing to resolve concerns about expiring motel vouchers.

While many are unimpressed with the county's track record, "I think there's a lot of trust in Judge Carter and his ability to effectively oversee this," Hoiberg said. He later added that since the cities can't address the issue alone, the solution should be "the responsibility of the county government, and they've kind of derelicted that duty."

According to Orange County interim public information manager Jennifer Nentwig, the county is taking responsibility. Nentwig said they recently added 165 beds to local shelters and that county outreach workers are conducting clinical assessments and recommending resources to the 697 individuals in motel housing.

Nentwig also highlighted the county's past efforts, including the hiring of a director of care coordinator to help cities share best practices and resources and the establishment of the Courtyard Transitional Shelter in October 2016.

While supportive of shelters expansions, Hoiberg said not all shelters are a good fit for all individuals who need housing, including those with caretakers, physical disabilities, pets, crowd-induced anxiety, or jobs and appointments that interfere with required arrival times at shelters.

Because of this, Hoiberg said, it's important that the county is looking into opening a "whole array" of housing for people with various needs. Hoiberg also emphasized the need to continue the lawsuit, which objects to anti-camping ordinances, in order to protect people who can't find a shelter that works for them.

Pope Francis and the gospel of engagement