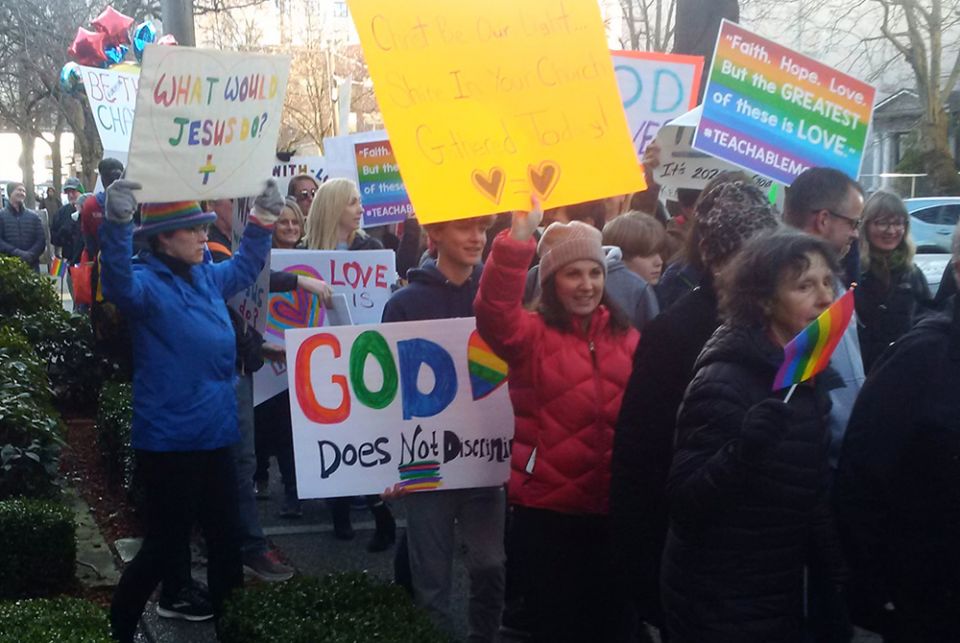 Two teachers who have reportedly been forced to resign from a high school outside Seattle now join a group of nearly 100 employees who have lost their jobs at Catholic institutions in the last 13 years because of LGBT issues, according to records kept by a ministry that advocates for LGBT Catholics.

The cases of Michelle Beattie and Paul Danforth of Kennedy Catholic High School in Burien, Washington, follow a similar pattern of employees at Catholic institutions who have been fired, forced to resign, had offers rescinded or had their jobs threatened because of LGBT issues.

After their engagements to same-gender partners became known to administration, health and fitness teacher Beattie and English teacher Danforth left in the middle of the school year.

While the school and archdiocese maintain the resignations were voluntary, attorney Shannon McMinimee, who represents both teachers, told NCR they resigned after the archdiocese made clear "that continued employment was incompatible with being honest about being gay and engaged."

Such actions on the part of Catholic institutions "focus on the wrong thing," said Loretto Sr. Jeannine Gramick, a co-founder of New Ways Ministry, which advocates for justice and equality for lesbian, gay, bisexual and transgender (LGBT) Catholics.

"When bishops or leaders in Catholic institutions complain that teachers or students need to follow the teachings of the church, the teaching that we need to follow is the gospel. And the gospel is clear about the dignity and respect of every human person," Gramick told NCR. 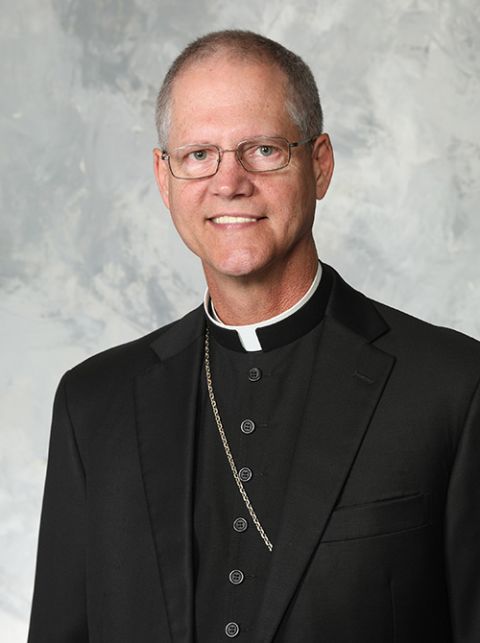 Seattle Archbishop Paul Etienne is pictured in an Aug. 14, 2019, photo. (CNS/Archdiocese of Seattle)

Seattle Archbishop Paul Etienne, who has been in the position for less than a year, confirmed that "within the family of God, all are welcome, and all are loved" in a Feb. 19 statement.

The statement added that "those who teach in our schools are required to uphold our teaching in the classroom and to model it in their personal lives. We recognize and support the right of each individual to make choices. We also understand that some choices have particular consequences for those who represent the church in an official capacity."

Gramick said she was encouraged by "grassroots Catholics" who support victims of discrimination, as protests by students and parents have become part of the regular pattern after news of such employment decisions.

Hundreds of Kennedy Catholic students walked out of the classes Feb. 18, joining about a hundred more parents and other community members to protest the loss of the beloved teachers. Many signs at the protest referenced students' faith, which they saw as supporting inclusion not discrimination: "Pray the hate away" and "I bet Jesus was not homophobic."

News reports quoted LGBT students who were especially pained by the loss, including a sophomore who said Beattie had comforted her after she was bullied and called homophobic slurs by other students.

Democratic State Sen. Joe Nguyen, who is a Kennedy Catholic graduate and a friend of Danforth, shared his support of the protesters on social media.

"Institutions like the Archdiocese of Seattle are on the wrong side of history and this will be a moment they'll look back on in shame," he wrote.

Cases like Kennedy Catholic and others are "creating a bad name for Catholic education," said New Ways Ministry Director Francis DeBernardo, who believes parents will choose to not send their children to Catholic schools if they are seen as intolerant and discriminatory.

"And young people are just not going to stand for this kind of nonsense," he told NCR. "They're being pushed out of the church."

DeBernardo said at the university level, administrators have more independence from local bishops and many have been in the forefront of promoting LGBTQ equality in their institutions, in part because they see such as a stance as necessary to the viability of their schools.

The perception that the church is anti-LGBTQ is already contributing to the exodus of young people from Catholicism, he said.

"It's a very bad pastoral move in terms of evangelization," DeBernardo said. "If part of [schools'] mission is to evangelize, this is the worst thing they could be doing. For young people, LGBTQ issues and equality are paramount."

That young people and parents are "voting with their feet" saddens the president of another Seattle Catholic high school.

"Our youth are fleeing the Catholic Church in droves. … One of these reasons is our tendency to exclude people instead of walking with them," Kent Hickey, president of Seattle Preparatory School in Seattle, wrote in a Feb. 19 email explaining their school's policies.

He wrote the email "so that all of our people know how deeply they are respected and valued and cared for here," he told NCR.

The email was disseminated widely, resulting in responses from some Catholics who said exclusion of LGBT people is one reason why they do not send their children to Catholic schools, Hickey said.

"This saddens me greatly. I love Catholic schools, where our goal is for people to know and love Jesus," Hickey said. "But this really hurts young people. Because today's kids have only known the church of the clergy abuse crisis, it's really hard to establish trust with them. They get angry and they just leave."

In his email, Hickey noted that Seattle Prep's employment policies also require employees to respect "fundamental Catholic, Jesuit teachings" and the school's mission. But "employment decisions involve a variety of factors. Just as we are not a one-issue Church, generally no one issue is fully dispositive in any employment decision," he wrote.

To those wanting a "specific list of permissible and prohibited behaviors," Hickey said, "Unfortunately for those people, the Catholic faith is not a list faith."

Instead, Hickey referenced Jesus' teaching to love God and our neighbors as ourselves. "That, in a nutshell, is what 'fundamental Catholic, Jesuit teachings' means at Seattle Prep," he wrote. "Perhaps, just as was the case when Jesus was questioned by the Pharisees, that nutshell isn't big enough for some."

Hickey also noted that in his 22 years in Catholic school administration, he had never terminated the contract of an employee who had divorced and remarried without an annulment, in part out of respect for employees' privacy, which is also part of Seattle Prep's employment policies.

He noted that many Catholic schools do not acknowledge employees' privacy rights through the use of the "ministerial exemption" in which every teacher is labeled a minister and thus exempt from some employment protections.

He said the accompanying public and private doctrinal requirements of such "ministers" were not only unjust but unrealistic — and nearly always focused on sexuality.

"When is there going to be media coverage of a Catholic teacher who was fired because his lifestyle did not include a commitment to helping the poor?" he said. "These things are always related to some sexuality issue, as if that was the be-all and end-all of Catholic core principles. I taught religion for 35 years, and it's just not the case that our personal sexuality is something that Jesus often discussed as a core principle."

DeBernardo also expressed concern about how Catholic institutions "overextend" the ministerial exemption to apply to employees who are not ministerial, including some who are not even Catholic.

"I'm a strong believer in the separation of church and state and [the ministerial exemption] is important for religious institutions," he said. "But I think the way the bishops are interpreting religious freedom these days is overstepping the boundaries."

Former Seattle mayor Greg Nickels, a graduate of Seattle Prep, noted that King County's anti-discrimination ordinance would otherwise protect Catholic school employees. "Any other employer would be breaking that law to fire two well qualified employees simply because they are gay," he wrote on Facebook. "It is wrong and the school should be held to account."

"It reflects Pope Francis' call to be a church of discernment and accompaniment," he told NCR. "The policy repudiates a litmus-test approach, which is what has happened in all of the LGBTQ employment disputes that New Ways Ministry has followed."

Last year, administrators at Brebeuf Jesuit Preparatory School in Indianapolis refused to fire a gay employee in a same-sex relationship, which resulted in the archdiocese attempting to remove the school's Catholic status. The Vatican Congregation for Catholic Education temporarily lifted the decree until its final decision.

Said DeBernardo: "Part of the problem of this trend is that it's like playing the carnival game of whack-a-mole," he said. "It keeps popping up somewhere new."

A version of this story appeared in the March 6-19, 2020 print issue under the headline: Students protest LGBT teachers' resignation .

African Methodists worry about the church that brought them Christianity