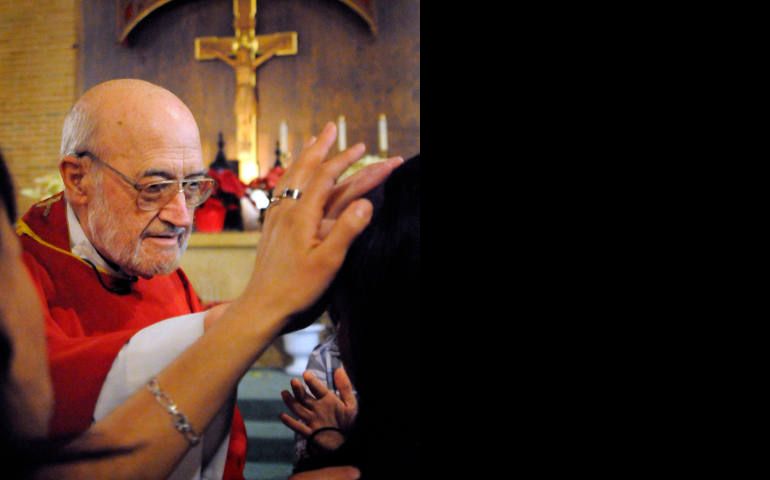 Davenport, Iowa — Msgr. Marvin Mottet, a priest whose name is synonymous with social justice, died Friday at Kahl Home in Davenport, three months after marking the 60th anniversary of his ordination to the priesthood. He was 86.

His funeral Mass was to be celebrated Wednesday at Sacred Heart Cathedral in Davenport, followed by burial at Mount Calvary Cemetery.

Bishop Martin Amos observed that in his 10 years as bishop of the Davenport diocese, "I've come to realize the tremendous impact Msgr. Mottet has had on people in general, the poor in particular and in the area of social justice."

A farm boy from Ottumwa, Iowa, who witnessed his parents' compassion toward anyone in need, young Marv Mottet honed his social justice skills as a student at St. Ambrose College, and later as a priest and teacher in the Davenport diocese and as executive director of the U.S. bishops' domestic anti-poverty program, now called the Catholic Campaign for Human Development in Washington, from 1978 to 1985.

He embraced diversity, working side by side with African-Americans and with Hispanics to end discriminatory practices in housing, employment and immigration. Ordained to the priesthood at Sacred Heart Cathedral in Davenport in 1956, he helped form the Catholic Interracial Council to address racial discrimination and segregation in the city a year later.

At age 78, he marched in a rally in Postville, Iowa, on behalf of immigrants in the country without legal permission who were devastated by a massive immigration raid on the town's meatpacking plant.

His networking skills led civil rights leader the Rev. Martin Luther King Jr. and a future saint, Mother Teresa, to agree to come to Davenport -- in 1965 and 1976, respectively -- to receive the Pacem in Terris Peace and Freedom Award. Mottet was stunned to be named a recipient of the same award years later, and suggested others he felt were more worthy of the award.

Mottet opened the Social Action Department for the Diocese of Davenport in 1969. He conceived the "Two Feet of Social Justice" approach to social ministry while standing on a corner near Nazareth House, now Project Renewal, in central Davenport. The "Two Feet," illustrated by the outline of a pair of shoes, became a symbol in many different dioceses and organizations throughout the world.

The outline of the shoes served as a metaphor of Mottet's life. He wore out many pairs of shoes engaging in social action. In 1978, he became executive director of CCHD and lived among the poor in a Catholic Worker House in Washington. "Social justice is not just a theory; I felt it was necessary to live in solidarity with the poor," he explained. So he helped open two Catholic Worker houses in Washington and two in Davenport.

The range of his influence on social justice in the Quad-Cities is extensive. "Quad Cities" is a region of northwest Illinois and southeastern Iowa, which includes Davenport.

A Pacem in Terris Coalition member likened it to the role of yeast in bread-making. It has an invisible but undeniable effect. Organizations such as Legal Aid, Center for Active Seniors Inc., Quad-Cities Interfaith, Interfaith Housing, Project Renewal, Cafe on Vine and other programs began or benefited from the leavening efforts of Mottet and his collaborators.

He helped launch Quad Cities Interfaith and Interfaith Housing, a congregation-based organization to address the causes of poverty locally. Numerous organizations that address poverty and injustice have taken root at his instigation and his ability to persuade others to join him. "We weren't intending to build an empire. It was research, plan, develop and spin-off," he said.

Prayer and the sacraments sustained him through his all-consuming ministries, a near fatal bout with cancer in his 30s, a kidney transplant, hip replacement surgery and other health challenges in later years. He often joked that "if they don't run out of used parts, I'll be all right. Sometimes I feel like a used truck."

Whether he was riding on a bus or seated in the chapel, you could find him deeply immersed in his well-worn breviary or another prayer book. When he wasn't praying, celebrating Mass or providing spiritual counseling, he'd be reading articles in Commonweal or America magazines or books on community organizing or healing ministry.

Even as he lay dying in Kahl Home, operated by the Carmelite Sisters, Mottet talked about the work of Edward Chambers, who with Saul Alinsky established the community organizing movement.

Mottet presided at healing Masses at Sacred Heart Cathedral until his health prevented it, and encouraged other priests to carry on that ministry.

Five years ago, the Roundtable Association of Catholic Diocesan Social Action Directors presented its Servant of Justice Award to him in Washington.

The organization recognized the priest for advancing social justice and dignity for all members of society through the tradition of Catholic social teaching. "Msgr. Mottet continues to put into practice the Gospel's preferential option for the poor as an advocate and an example," it said.

His steadfast faith in God guided him through each day. "Every day is gift," he said. "Thank God for the gift of life."

Social justice demands time, but so does self-care