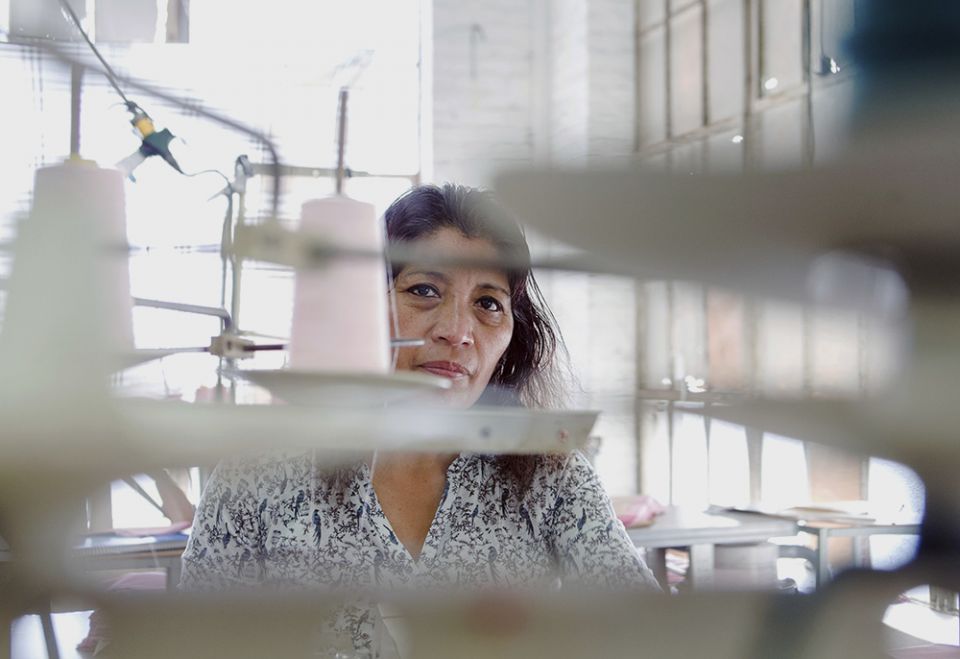 A worker sews Fashion Nova clothing in a garment factory in downtown Los Angeles on April 1, 2019. The federal Labor Department found in 2016-19 investigations that many Fashion Nova garments are stitched together by a workforce in the United States that is paid illegally low wages. (AP/GDA via AP Images/The New York Times/Jessica Pons)

Monday through Saturday, garment workers in Los Angeles show up to rundown factories or old warehouses to produce clothes for some of the world's biggest fashion brands. They work in cramped and crowded rooms filled with roaches, rats or rat feces. Emergency exits are sometimes blocked, with some workers reporting being locked in the factory rooms when inspectors visit, especially during COVID-19 lockdown orders.

Sofia Garcia Palomares, 53, works in similar conditions for a boutique that sells handmade clothing. "They do not give us toilet paper or water, and we have to eat in a dirty dining room," Palomares said.

Despite working 10-hour days, many garment workers like Palomares made less than minimum wage, until now. Palomares explained that some days she would make $20 a day, and others $40.

But a new California state law, Senate Bill 62, the Garment Worker Protection Act, should bring wage consistency to Palomares and other workers, many of whom are Catholic.

California Gov. Gavin Newsom signed the law — the first of its kind in the nation — earlier this fall.

GWC Director Marissa Nuncio is kicking off our press conference celebrating the passage of the #GarmentWorkerProtectionAct. We’re outside the LA Textile Show to highlight the industry-leading efforts of garment workers organizing for their rights! Livestream links in the replies. pic.twitter.com/5AL0TYqPag

"SB 62 was aimed to address one of the primary problems workers are facing everyday: wage theft. When workers are not paid correctly, their family suffers, they suffer," Marissa Nuncio, director of the Los Angeles-based Garment Worker Center, told NCR.

This law will be the first in the nation that allows for "upstream liability," where garment workers can access those at the top of the supply chain and hold them legally responsible for their actions, she explained.

Before SB 62, the fashion brands held all of the bargaining power. Many fashion companies subcontracted their work out, making it hard for garment workers to interact with the company asking for the pieces. Fashion brands tend to contract with the lowest bidder, creating "a race to the bottom," Nuncio said.

Olivia, who asked that her last name not be used, has been a garment worker for 16 years. Her daily tasks include coverstitching, operating multi-needle machines, ironing and packing. The new law means a lot to seamstresses like her.

"I can now work minimum wage like most Angelenos do," she said, adding that she hopes SB 62 will lead to a deeper understanding of how clothes are made.

"Every piece and clothing you see is made by people who also eat and need to live a decent life." she said.

Workers' ability to negotiate a fairer wage also may provide the possibility of improving undignified working conditions, such as poor lighting, no running water or very limited bathroom breaks. Many workers also have detailed verbal abuse from their bosses.

In addition, the fabric fibers are often covered in chemicals that make them easier to run through a machine, but workers inhale these chemicals that can often lead to respiratory ailments, Nuncio said.

When asked what gave her the courage to advocate for SB 62, Palomares cited her Catholic faith.

"When we were fighting for this, I asked God to reach the heart of the governor to sign the law," she said.

This bill is also set to assist women of color and immigrants who are frequently exploited when it comes to wage theft in the garment industry.

Gonzalez held meetings with the garment workers and made visits to the Garment Worker Center. She met with advocates and the press, and communicated with the governor's office to ensure the passage of this bill.

"She is especially driven when there's an issue of other people being treated as less, being discriminated against, being given less — women who don't have the resources to buy diapers for their babies, people who don't have access to health care, formerly incarcerated and especially immigrants and the working poor," Durazo said of Gonzalez.

Gonzalez is "trying to practice our faith and the issue of justice," Durazo said.

Other Catholic labor leaders said they admire the work of Durazo and Gonzalez — especially since so many Americans do not know where their clothes are made and think sweatshops are only an overseas issue.

"There is no question that they [the authors of SB 62] are absolute worker rights advocates," she said. "They were centering the demands of the workers in this campaign. It was great to know we were on all the same page fighting in the same way."

"For Lorena, there is no such thing as unskilled labor," he said.

A version of this story appeared in the Dec 10-23, 2021 print issue under the headline: Garment workers cite faith in fight for fair wages .

What New York's dumpster divers can teach us about treasuring creation