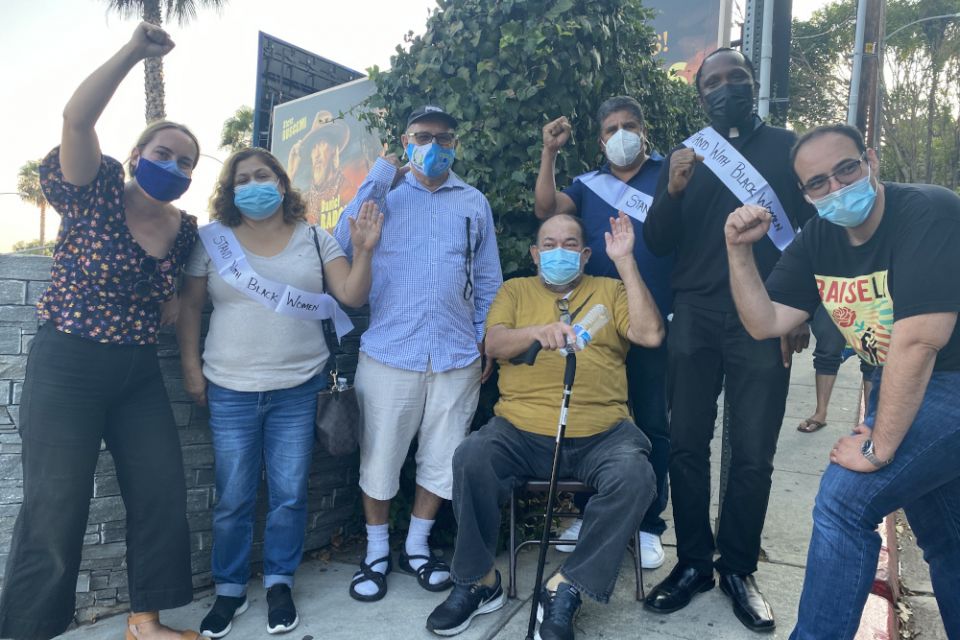 A parish in Hollywood, California, is supporting hotel workers who were laid off during the pandemic, joining them on the picket line, hosting a listening session at the parish and in the process, educating parishioners about labor conditions in their community.

In March 2020, more than 200 workers at the classic Chateau Marmont hotel were laid off with no severance pay when the hotel closed because of the coronavirus pandemic. When it re-opened, some of the fired workers allegedly were replaced with contract workers.

In a statement to NCR, the hotel said it has already rehired more than two dozen former employees based on the City of Los Angeles' right-to-recall guidelines and has reached out to 100 more former employees "based on the positions that are becoming available at the hotel." Some former employees allege they were not rehired in order of their seniority or were offered lower wages than they had originally received before the pandemic.

After working in maintenance for four years at the hotel, Alejandro Roldan was laid off because of the pandemic on March 17, 2020. He was told to wait for his last check by mail. This meant that Roldan started the pandemic with no healthcare and no job. Later that month, Roldan and his wife got COVID-19.

"All my savings went away," said Roldan, who filed for unemployment and then began working in his father's cabinet painting business, but with longer hours for less pay.

Although the workers were not unionized, a local hospitality union, Unite Here Local 11, helped organize protests outside of the hotel and a boycott of the hotel, asking patrons not to return until it has "demonstrated a commitment to respecting its workers."

When Blessed Sacrament Parish in Hollywood held a listening session for workers in December 2021, Roldan, who supports the protests and boycott, shared his story with members of the parish.

Roldan said sharing his struggles with the Catholic community made him feel supported. "I have people's back, and they have my back," he said.

"The faith of my community and my church is strong, we support each other, especially in my current fight to go back to work."

Martha Moran, a Catholic and former hotel worker, also spoke at the Blessed Sacrament Church about why she is protesting and supporting the boycotting of the Chateau Marmont. Moran worked at the hotel for 33 years and was among the 200 workers fired from the hotel in March 2020. She commuted two hours every day to work as a housekeeper.

"Mi fe es importante y mi fe es grande. I believe in God and I believe that God helps me," she told NCR.

"The faith of my community and my church is strong, we support each other, especially in my current fight to go back to work," Moran added.

As members of the parish learned more about the boycott, they began to join the hospitality workers on the picket lines. Among them was Jesuit Fr. Ike Udoh, a pastoral minister at Blessed Sacrament.

Udoh said that he has always admired the desire that many workers have to provide for their families and to fight for higher wages.

"For me, I've always just been struck first of all, by not only the disruption and the kind of suffering that the workers experience, but also there's just a lot of resilience on their part," he said. 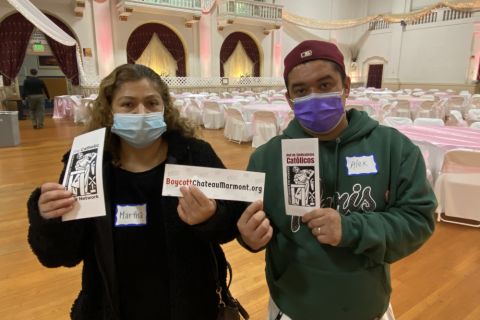 After learning that the workers had been laid off at the start of the pandemic, Udoh began to make house visits to check in on workers and to offer companionship. Udoh said watching his community come together and support hospitality workers gave him a picture of the kingdom of God.

Throughout the pandemic, Moran and Roldan continued to advocate at the state level for more workers' protection when it comes to rehiring. They were part of a group that traveled to Sacramento to lobby Gov. Gavin Newsom to sign the Right to Return bill, which would require hotels to first rehire workers laid off during the pandemic when able to, preventing employers from hiring people with less experience for lower wages. Newsom signed the bill in April 2021.

Hannah Peterson, a union representative for Unite Here Local 11, lives at the Los Angeles Catholic Worker house and is on the board of the Catholic Labor Network. She says that watching these workers organize over the last two years has been inspiring.

Catholic clergy and the Catholic community stepped in and, "viewed the treatment of workers not just as a concept of Catholic social teaching, but as one that can be transformed into action," Peterson told NCR.

"A beautiful relationship began to form," she added.

web Father Ike at an action at Chateau Marmont 2.JPG 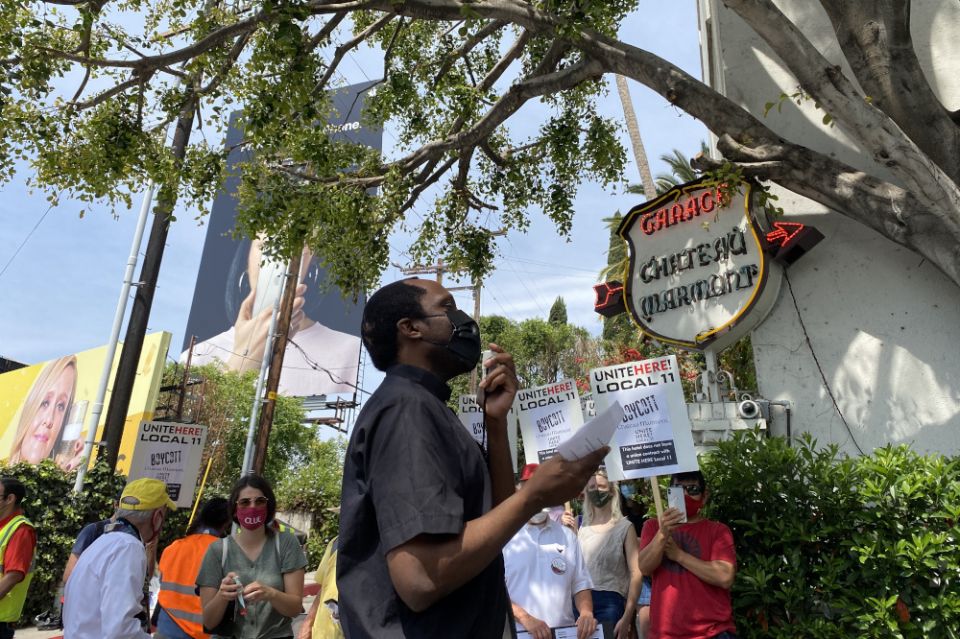 The boycott of the Chateau Marmont reflects a larger trend across the state and the country where those working in hotels are asking for COVID-safe working environments, along with more benefits like healthcare and living wages.

In its statement to NCR, the hotel said it offers wages "above those offered at comparable hotels with union employees" as well as free health insurance to current and all future employees.

"It's important to note that Unite Here Local 11's stated goal is to help former Chateau employees return to their positions, but, in fact, their ongoing campaign to harass and threaten the Chateau's staff, guests and neighbors has done nothing by hinder the return of those former employees by making it more difficult for the Chateau to return to a higher operating capacity," the statement said.

But the former employees who support the boycott disagree. And they say they are bolstered by their faith, which they are leaning on as the boycott continues.

When Moran was working for the hotel, she could not always attend Mass because she worked Sundays. Instead, she and her co-workers would share their trust in God with each other and their support for one another. When times were tough, they would ask God for help, and they always gave thanks to God, she said.

Now as Moran continues to fight to get her job back, she says she will speak to any Catholics who will listen and is especially hoping they will join her on the picket lines.

Peterson, of the union and Catholic Worker, wishes more parishes could support workers facing labor injustices in their community. "If we just share the struggle with one church to the next across the world, imagine what kind of impact that could have," she said.

A version of this story appeared in the Feb 18-March 3, 2022 print issue under the headline: Hospitality workers lean on Catholic community for support .