by Robert Alan Glover
Justice
Parish
This article appears in the The Field Hospital feature series. View the full series. 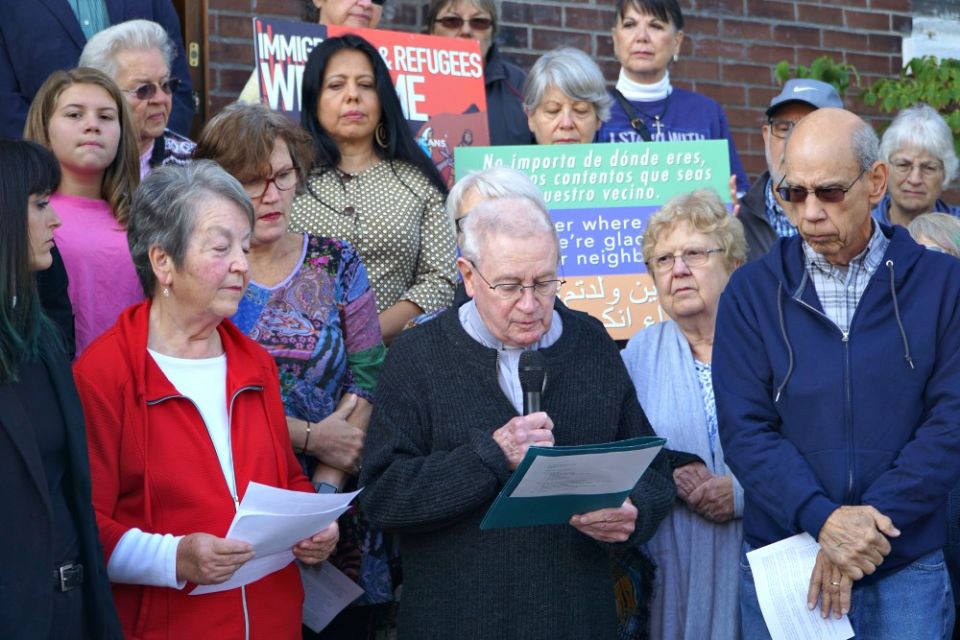 Fr. Jim Flynn, a retired priest of the Archdiocese of Louisville, Kentucky, reads a portion of a statement Oct. 8, 2019, at St. William Church that reaffirmed the parish’s commitment as a sanctuary church. (CNS/The Record/Jessica Able)

Louisville, Ky. — St. William Catholic Community here has declared itself a "Sanctuary for All." In a public statement released in October, the parish decried "the brutal and racist policies of the present administration," and pledged "a commitment to support the leadership of immigrant-led groups who work diligently to establish justice for all."

Fr. John Burke, sacramental minister of St. William, told NCR that the parish's decision to "commit our hands and voices to the work of building structures of Sanctuary for All," as the statement described it, means a commitment to what he described as "our identity as a sanctuary congregation."

The parish formerly housed Central American immigrants in the 1980s in a building that is now a youth center.

“While we are no longer equipped to house immigrants as we did in the 1980s, we nonetheless commit our hands and voices to the work of building structures of Sanctuary for all” St Williams public recommitment as a sanctuary parish pic.twitter.com/SLQAPcgs8L

"It is important for us as a Catholic church to be concerned about the plight of refugees, which is why we also work with La Casita, a local agency that supplies housing and auxiliary support services," Burke said.

He added, "Yes, we are standing behind our brothers and sisters who are struggling for a better life."

Burke has been a priest for 47 years, with 18 years at St. William. It is a parish, he said, of 250 families with a legacy of passion for social justice, opposed to the Trump administration agenda on immigration and other issues.

David Horvath, a community organizer and St. William parishioner, told NCR that "I was inspired by the stand that people here took, despite some early misgivings about legal problems we might face down the road."

Horvath said the Louisville Archdiocese originally asked the parish to delay making the statement, at a time when the Trump administration was threatening sanctions on any city that declared itself a sanctuary city for refugees.

Eventually, the archdiocese issued a statement of its own, "in connection with ours, and since then we've launched into our own efforts along with the Interfaith Coalition for Immigration Justice to aid individuals and families," Horvath said.

"We were already involved with the refugee issue, but making this public statement only helped us more in our efforts," he said.

Horvath was involved with the immigration issue — and St. William — in the 1980s, when the church functioned as a refuge for people fleeing violence in El Salvador and Guatemala. He said that at that time, the refugees "wanted to be seen, in order to make a public statement."

"Now, they are here for a totally different reason; they are seeking asylum, and are in fear of violence — from their own governments, the drug cartels, etc.," Horvath said.

"There is evidence that Immigration and Customs Enforcement is active in our area, not on a large scale like the units you have heard about in other locales, but a favorite tactic of theirs is to take the father away, and leave the mother with her children — and wearing an ankle bracelet — so that she cannot go to work," Horvath explained.

Since 2017, a city ordinance has barred the Louisville Metro Police Department from assisting and or cooperating with ICE in any of its enforcement activities.

Horvath said there are safe houses in the Louisville area that combat Trump administration's immigration policies.

"I can tell you that there are places in Louisville where people can live while they sort out their immigration status — i.e., asylum — or pull together whatever documents that they need, and local people of all kinds are helping them," Horvath said.

And, he said, "the people staying at these places are at greater risk than the people who are helping them."

Karina Barillas, also a member of St. William, is the executive director of La Casita Center, an organization devoted to Louisville's Latino community.

She said that Trump administration rhetoric and policies have created uneasiness among Louisville's Latinos.

"We are at risk, and many of us are practically living in fear," she said.

Barillas said that the community has been "victimized by violence, by racial profiling and by racism in general."

Barillas said that the St. William's public statement on sanctuary is an offer of protection.

"It means that we are safe, when our people are suffering," she said.

Related: Can laypeople lead a parish? Look to Louisville for a thriving example

St. William is part of the Interfaith Coalition for Immigrant Justice.

Through the coalition, St. William pays for the salaries of two community liaisons. One works on legal issues, and the other with families in needs of emotional support, resources and advocacy, Barillas said.

She said that La Casita assists those coming to Kentucky from all over Latin America, with the largest numbers coming from Mexico, Guatemala, Honduras and Cuba.

Barillas said that ICE is a threat to the migrants.

"The fear is real, because anyone that fulfills the 'profile' can be detained, and in a recent case, ICE agents even hit someone in detention who was not resisting arrest," she said.

La Casita, meanwhile, is addressing what Barillas described as "an increase in poverty and need for mental health services among Latinos in the Louisville region." The center offers a soup kitchen, a food pantry, a diaper pantry, English classes, legal aid, and an educational program preparing children for kindergarten.

Adjacent to La Casita is the Casa Latina Catholic Worker House in the rectory of the former St. Philip Neri Church. Casa Latina operates on a budget of less than $15,000 per year, with much of its work done by volunteers, including legal assistance from local lawyers who donate their time.

The house's roof is in need of repair, the plumbing has issues, and parts of the floor are rotting.

"The Latino community here is growing; the largest number of baptisms in the [Catholic] churches, for example, are Hispanic babies, and the population — despite being young — is still a minority for sure," said Maria Scharfenberger, a marriage and family therapist who is a member of the Catholic Worker community.

Most of the Hispanic community, she said, "lives on the periphery — or edges — of Louisville; east, southeast, southwest, south, and a few in the west end, but even there, the population is growing because housing is cheaper."

Apart from its declaration of sanctuary, St. William has offered help in many other ways, Scharfenberger said.

"St. William's has offered a great deal of support to both La Casita and Casa Latina. For example, when we were looking for sponsors for asylum seekers in detention, people stepped up," she said.

While supporting a woman whose husband was deported, the church furnished her with supplies and let her sell tamales at the church to make money.

"Where there has been a financial need for a family member's bond, individuals and the church stepped up with money to help, and when people just out of detention needed bus or plane tickets, people came forward with frequent flyer miles," she said.

"St. William's Church has acted as the hub, so to speak, for the larger churches to organize and involve them in ministry and social justice actions" through the Interfaith Coalition for Immigrant Justice, Scharfenberger said.

[Robert Alan Glover writes for Catholic News Service, the Tennessee Register in the Nashville Diocese, and Faith magazine in the Memphis Diocese. He lives in Lexington, Kentucky.]

The human face of the Blackjewel coal mine bankruptcy

Justice | Louisville Catholics declare their parish a 'Sanctuary for All'