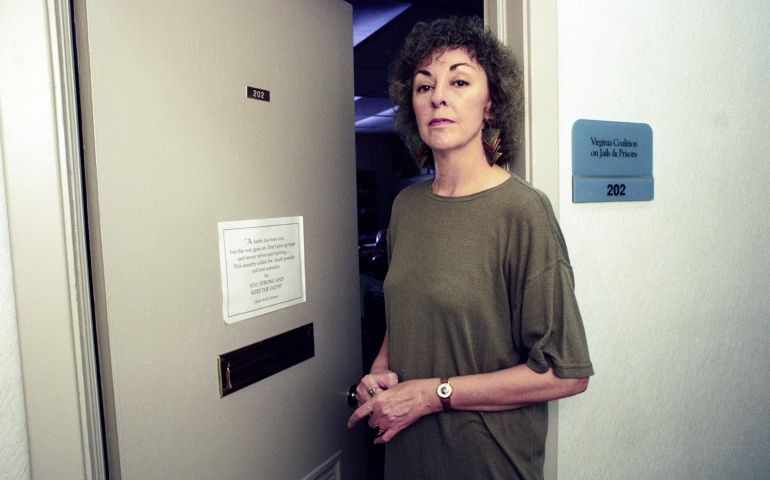 In my years of friendship with Marie Deans, going back decades, I must have said too, too often, "Time has come to write your memoirs." She promised it would be on her to-do list one day, but first she had to speed off to get here, get there and on down life's highways that might not have guardrails to save her from the mean turns and twists. It didn't matter. She had no taste for risk-free living, least of all when, as a death penalty abolitionist, she was battling for people she cared about: the dozens of condemned prisoners awaiting execution in dispiteous Southern cellblocks.

Among them was Joseph Giarratano. In 1987, Marie phoned me with a story idea about him. Hours before, she had been at the Mecklenburg State Prison in southern Virginia visiting Giarratano, a death row inmate for eight years. He's innocent, Marie said, asking me to take a look.

Her call being something between a nudge and push, I went to the prison. It would be the first of five visits with Giarratano and five columns about his case.

Marie did begin her memoirs, but for multiple reasons could not finish: the down times of episodic illnesses, publishing house rejections of her book proposals, the destabilizing stresses of her all-consuming and low-paying work with the Virginia Coalition on Jails and Prisons as well as Murder Victims' Families for Reconciliation. The 75 pages of incisive prose that she did complete are the core of A Courageous Fool: Marie Deans and Her Struggle Against the Death Penalty, a valuable biography by Roanoke College Professor Todd Peppers with Margaret Anderson and published this month by Vanderbilt University Press.

The title is Marie's self-definition of her mission to befriend inmates: "To do this work ... you must be a courageous fool." Or as Pepper writes approvingly: "She was too stubborn or foolish to abandon the fight despite her fears and doubts — especially when it came to the lives of the men on death row."

For some 35 years until her death at age 70 in 2011 in Charlottesville, Virginia, Marie "wore many different hats," Pepper reports. "She found attorneys for men who were facing execution without legal representation; she worked to improve prison conditions and inmates' access to lawyers and legal research materials; she acted as surrogate mother and spiritual advisor to the men; she assisted lawyers in the drafting of appeals and motions; and she helped create the role of mitigation specialist in which she interviewed the inmates, their family members, and experts in an effort to convince the jury that the inmate's life was worth saving."

Little of the fame and honor showered on St. Joseph Sr. Helen Prejean, Bryan Stevenson and Amnesty International for their calls to jam the gears of the state's killing machines found its way to Marie Deans. The undeserved obscurity in which she worked was partly behind Peppers' promise in 2008 to help her write the memoir.

Along with Anderson, a former Roanoke College student and research assistant, Peppers went to Marie's home, "crawling through her dusty attic looking for death penalty files and sitting on the floor of her living room, slowly going through box after box of Marie's writings, speeches and photographs."

Once, the pair took notice of a quotation by St. Cyprian on Marie's desk: "The world is drenched in mutual slaughter. ... Held to be a crime when committed by individuals, homicide is called a virtue when committed by the state."

Over the years of her ministry, 34 men asked Marie to stand watch in the final hours of their lives, the serial killing of killers. Her acts of mercy tore into her soul, as when she wrote: "I have execution flashbacks. I can be driving down the street and suddenly see an execution happening in front of me."

Peppers writes, "In the days after executions, Marie would be driven to bed by terrible migraines and bouts of depression."

For 29 years, the prisoner to whom Marie became most closely bonded was Giarratano, one of three she succeeded in freeing from death row because of dubious convictions. Giarratano was conditionally pardoned but not released in 1991 by Gov. Douglas Wilder.

In the book's literate foreword, Giarratano, who has been eligible for parole for several years and is now confined to Virginia's Deerfield Correctional Center, wrote that Marie was no addled "bleeding heart who was soft on crime or criminals. I personally knew murderers, rapists, and robbers who dreaded encountering Marie. They knew, as I did, that she was not in the least tolerant of rationalizing, excuse making, whining and 'woe is me' crap. Marie demanded, without exception, that each one of us take responsibility for our lives and our actions."

One action that aroused her ire was the time I called her the angel of death row. Shush up, she said, letting me know it was false and, besides, no angel could ever get past prison security. Too suspicious looking, wings and all.