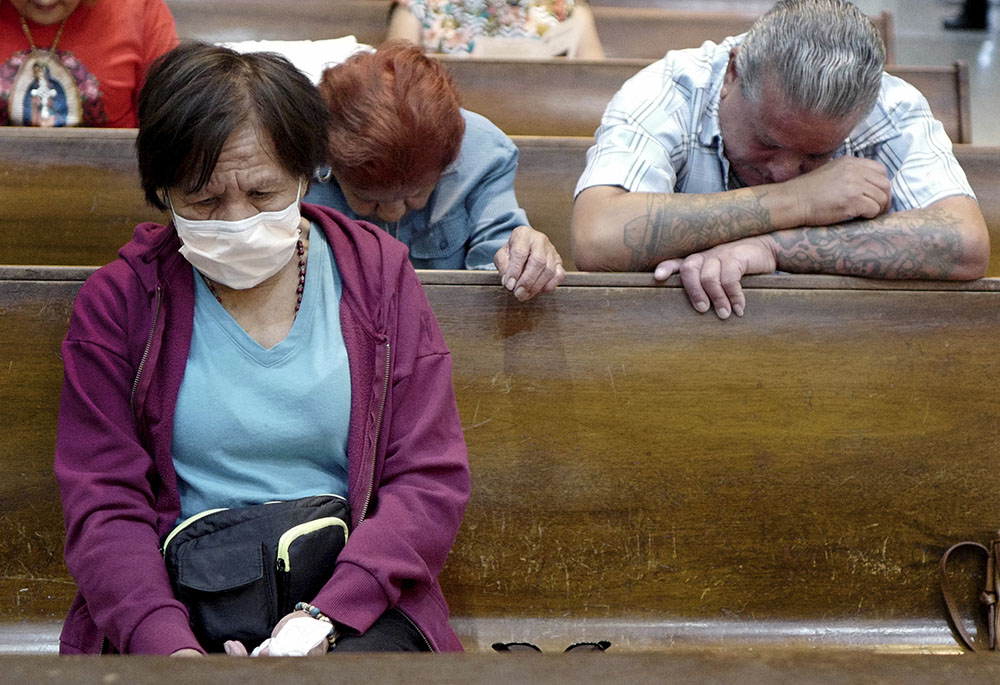 Esperanza Treviño, mother of Melissa Lucio, bows her head during a vigil at the Basilica of Our Lady of San Juan del Valle National Shrine April 22 in San Juan, Texas. On April 25, the Texas Court of Criminal Appeals stayed Lucio's execution, which was set for April 27. (The Monitor via AP/Delcia Lopez)

On April 25, the Texas Court of Criminal Appeals stayed the execution of Melissa Lucio that was set for April 27. In 2008, Lucio was sentenced to death for the murder of her 2-year-old daughter, Mariah, who died two days after a fall down a flight of stairs. Catholic advocacy groups and faith leaders have spoken out against Lucio's planned execution for months. The Texas Court of Criminal Appeals ordered the 138th Judicial District Court of Cameron Country to consider new evidence of her innocence in the death of her daughter.

One of the key Catholic groups advocating for Lucio's innocence is the Catholic Mobilizing Network (CMN). After news of yesterday's stayed execution, Executive Director Krisanne Vaillancourt Murphy issued a statement in which she said: "We give thanks to God that Melissa will not be executed this week and that she will soon have the opportunity for a new trial to prove her innocence. Melissa is a person created in the image and likeness of God."

"In Melissa's case, we see clearly how deeply flawed our capital punishment system is, and how it places innocent lives at risk. Her story also reveals how this system targets the most vulnerable among us, including people of color and those with histories of serious trauma," the statement added. 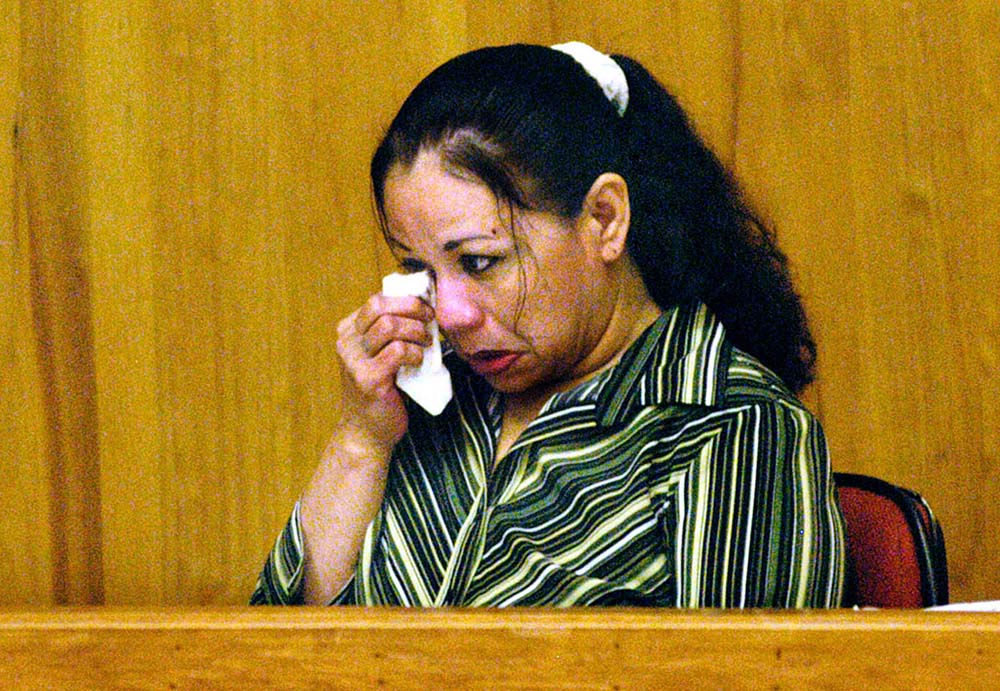 Melissa Lucio wipes her eyes in a courtroom in Brownsville, Texas, on July 10, 2008, the day she was sentenced to death for the murder of her 2-year-old daughter, Mariah. (AP/Valley Morning Star/Theresa Najera)

Murphy told NCR that she was inspired by the movie "Dead Man Walking," a film about St. Joseph Sr. Helen Prejean ministering to a man on Louisiana's death row, which challenged Murphy's understanding of a consistent ethic of life and expanded her concept of God's mercy.

NCR: Why do you think Lucio's case in particular has gotten so much national attention?

Murphy: There are two main reasons I think the country has grabbed onto Melissa's case. The first, of course, are the incredible doubts surrounding her guilt and original conviction. Various pieces of evidence presented at her trial were later proven to be false or wholly discredited by modern forensic science. No evidence was ever presented that Melissa was abusive toward her children. Her confession had all the hallmarks of being coerced.

The second reason, I think, that Melissa's case has captured the nation's interest is her obvious humanity. Here is a Mexican-American mother — and devout Catholic — who suffered the unimaginable loss of a young daughter and was then at risk of having her life taken by the state. She was the lifelong victim of physical and sexual abuse, who went on to further be victimized by the cruelty and brokenness of our capital punishment system. In Melissa, we see our own humanity and are reminded of the dignity of the human person. We feel in our hearts how wrong it would have been to prematurely end her life.

What does Catholic social teaching say about the death penalty?

Catholic Social Teaching helps us understand why the Church calls the death penalty "indamissible" in all cases [Catechism of the Catholic Church, 2267]. The principle of "life and dignity of the human person" reminds us that every person is endowed with a God-given dignity, and because of this, we do not have the authority to create or destroy life — even the lives of those who have caused grave harm. The death penalty also places innocent lives at risk, as we see with the case of Melissa Lucio. In the modern era of capital punishment, more than 185 innocent people have been exonerated from death row after being wrongfully convicted and sentenced to death. 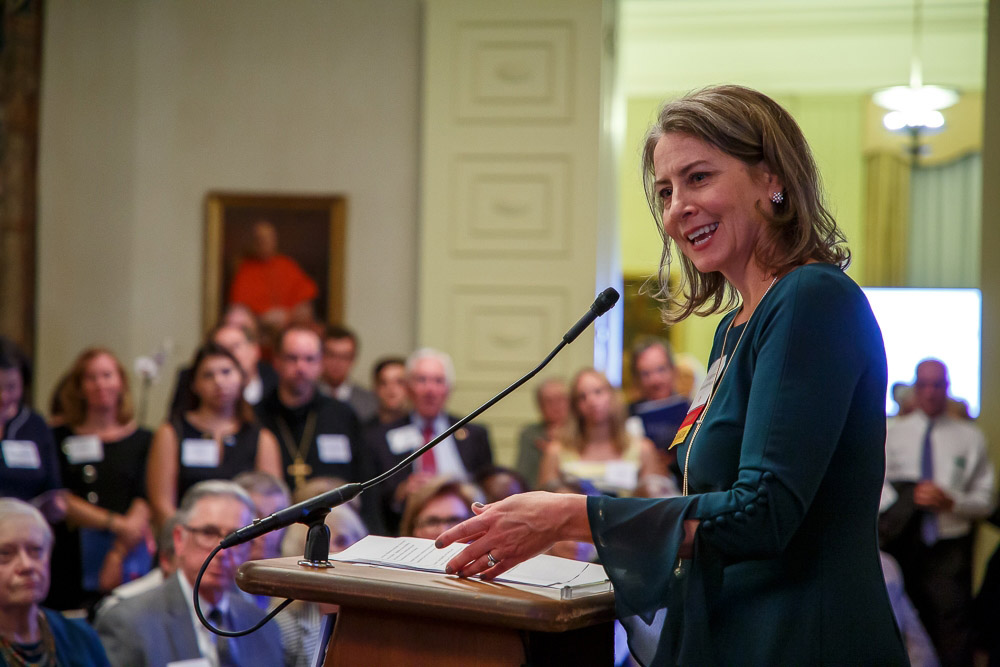 The principle of "preferential option for the poor and vulnerable" calls us to care for the marginalized among us. The capital punishment system disproportionately targets vulnerable populations, including people of color, people experiencing poverty, and people with serious mental illness, intellectual disability, and severe trauma.

Catholic Social Teaching offers a framework and principles for orienting ourselves to Gospel values and Christ's teachings. It is clear that the death penalty is incompatible with these principles for all the ways that it violates human dignity, risks innocent lives, fails to bring healing, and targets the most vulnerable among us.

Do you think this could be an opportunity for Catholic political leaders across party lines to advocate together to stop the death penalty or this execution?

Absolutely. Over the past several weeks, we saw in Texas how Melissa Lucio's case has united decision-makers across party lines in opposition to her execution. Last month, a bipartisan group of 83 Texas representatives called on Gov. Greg Abbott and the state's Board of Pardons and Paroles to grant Melissa clemency or a reprieve. You do not have to identify as a Republican or Democrat to be horrified by the prospect of executing an innocent person.

What did it mean for the Texas bishops to also speak out against Lucio's execution?

The bishops of Texas are a consistent witness against all executions happening in their state — and Melissa's troubling case has been no exception. We were grateful to be able to highlight [Brownsville] Bishop [Daniel] Flores' and Austin Bishop [Joe] Vasquez's strong statements against Melissa's pending execution in CMN's recent video about her case. And it has been encouraging to see them bear witness in other ways, such as the prayer vigil organized by Bishop Flores and the Diocese of Brownsville the past week, where some of Melissa's family members were in attendance.

Has the U.S. Conference of Catholic Bishops addressed this case or the four scheduled executions that were to take place in the span of nine days this month?

Catholic bishops in the United States have long been strong and vocal on this issue. For decades, the USCCB has been emphatically opposed to the death penalty. Archbishop Paul S. Coakley of Oklahoma City, chairman of the USCCB Committee on Domestic Justice and Human Development — which addresses capital punishment — has been a tireless advocate to end the death penalty.

Typically, state executions are addressed by local state bishops. Of the four executions that were scheduled for April, Catholic bishops publicly declared the Church's opposition in each of the affected states (Tennessee, Texas and South Carolina). Prior to the April 21 scheduled execution of Oscar Smith in Tennessee, the state's  three bishops met with Gov. Bill Lee and urged him to halt its upcoming executions. (Mr. Smith's execution was ultimately granted a reprieve by Gov. Lee due to an "oversight" with the state's lethal injection protocol.) In South Carolina, where the only two available methods of execution are currently firing squad and electric chair, the Diocese of Charleston has issued multiple statements opposing recent efforts to restart executions. And in addition to its advocacy against the execution of Melissa Lucio, the bishops of Texas publicly condemned the state's April 21 execution of Carl Buntion.

At the national level, the USCCB was very vocal against the 13 executions carried out by the federal government under the Trump administration in 2020 and 2021.

There is a resurgence of state executions happening right now. This is a result of the pandemic, which caused execution and death sentencing rates to slow for the past two years. Now with pandemic restrictions lifting across much of the country, executions are picking back up.

It is important to note that despite the recent uptick in execution dates, the nation as a whole is unquestionably trending away from the use of capital punishment. To date, 23 states have formally abolished the death penalty. More than two-thirds of U.S. states have either outlawed capital punishment or otherwise have not carried out an execution in at least 10 years. 2021 was the fifth consecutive year with fewer than 30 executions and 50 death sentences nationwide. And a higher percentage of Americans oppose capital punishment than at any other time in the modern history of the U.S. death penalty.

While the long-term trends toward abolition are in our favor, it is still critical that Catholics use their voices to oppose the rise in executions which is currently taking place. People can sign up for CMN's Mercy in Action Project to be notified about upcoming executions and ways to take action to oppose them at catholicsmobilizing.org/mercy.