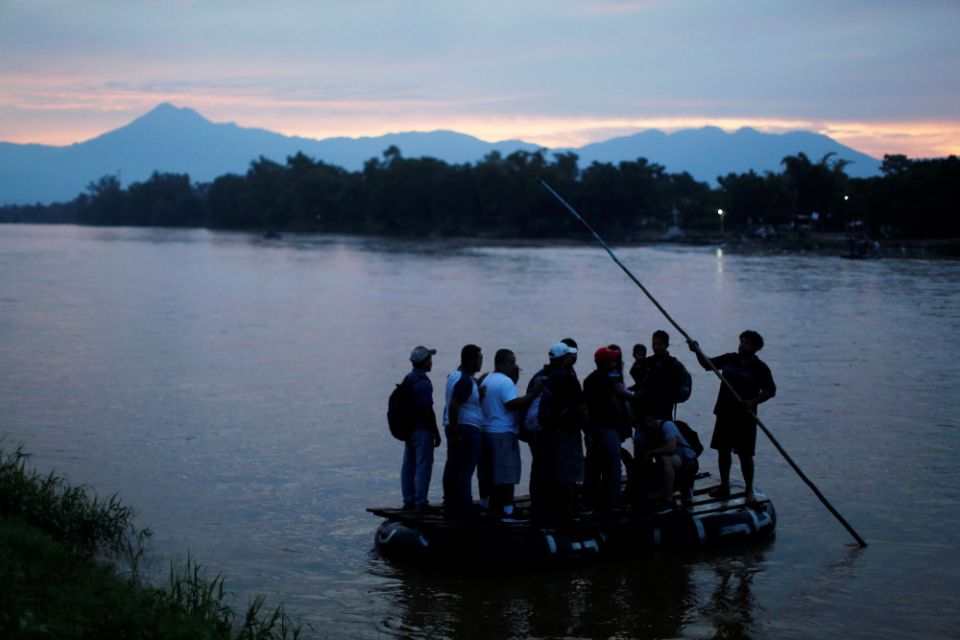 Residents of Tecun Uman, Guatemala, and migrants from Central America cross the Suchiate River June 10, 2019, to enter Ciudad Hidalgo, Mexico. The Mexican bishops' conference questioned details of the U.S.-Mexico immigration deal, in which Mexico will strengthen security along its southern border with Guatemala and impede the path of migrants fleeing poverty, violence and food insecurity. (CNS/Jose Cabezas, Reuters)

The Mexican bishops' conference questioned the details of a deal in which Mexico will strengthen security along its southern border with Guatemala and impede the path of migrants fleeing poverty, violence and food insecurity.

"We express our concern for the lack of a truly humanitarian reception for our brother migrants, which reflects our convictions regarding the protection of the rights of all human beings equally," the bishops said in a statement June 10.

"Our brother migrants must never be a bargaining chip. No negotiations should be placed above what the church and civil society have defended for years: not criminalizing migrants nor the defenders of human rights," the statement said. "If we have rejected as Mexicans the construction of a (border) wall, we cannot turn ourselves into that wall," which would stop migrants in southern Mexico.

Mexico and the United States struck a deal June 7 after U.S. President Donald Trump threatened to slap tariffs of 5 percent on Mexican imports and increase the tariffs until migration through Mexico stopped.

In the deal, Mexico agreed to send 6,000 members of its newly formed militarized police to patrol its porous border with Guatemala. It also agreed to take back more asylum-seekers, who would wait in Mexican border cities as their claims proceed in U.S. courts.

Mexican officials celebrated the deal, saying tariffs would have dented economic growth and caused the loss of 1.2 million jobs, just as the country's economy was showing signs of slowing.

Foreign Minister Marcelo Ebrard said June 10 the deal would be reviewed in 45 days and, if it was not working, a regional agreement would be sought and could include countries such as Brazil, Panama and Guatemala. Migrants from Africa and Asia often land in Brazil and head north, while Cubans fleeing the island head first for Panama, then try to reach the United States; migrants exiting Central America must pass through Guatemala.

Ebrard also said Mexico was still pushing a plan to pump billions of dollars of development assistance into Central America to address the root causes of migration.

Mexico's bishops welcomed the plans to develop Central America, but expressed concerns over the deployment of the national guard, which was created to pacify the country, but was being deployed to stop migrants.

"Sending 6,000 members of the National Guard to the southern border is not a solution that gets to the root cause of migration. Combatting poverty and inequality in Mexico and Central America would seem to have been replaced by fear of the other," the bishops' statement said.

The bishops also expressed reservations over the expansion of "Remain in Mexico," in which asylum seekers wait in Mexico border cities for their claims to be processed. They said of the plan: "Thousands of Central Americans will wait for a resolution to the migratory situation, being exposed to the grave risks of Mexican border cities and being impeded in their access to legal assistance. We can't be indifferent to the pain they are living."

"It pains me enormously that they're treated this way. It's a shame that they're seen as criminals and that they're being detained before arriving in their destination country," the United States, Archbishop José Luis Escobar Alas of San Salvador, told reporters June 9, according to the Associated Press.

"It won't stop migration because, one way or another, migrants are going to get through. It's not effective," he added. "I wish these countries" — Mexico and the United States — "would help us to overcome these problems that we have in Central America and that way our brothers would not have to migrate."

Escobar expressed bitterness that Mexican President Andrés Manuel López Obrador abandoned a campaign pledge to "not do the dirty work" of other countries on the issue of migration.

"It's sad that Mexico, which had showed an outstretched hand — I'm referring particularly to the president ... whom we saw acting with such humanity — now appears to have had his arm twisted when he was pressured with taxes," the archbishop said.

López Obrador took office in December 2012 and started issuing humanitarian visas to migrants, which allowed them to remain in Mexico for one year, travel freely and obtain social services.

Migrants, however, used the visas to quickly transit the country and reach the U.S. border, showing little interest in Mexico, according to observers.

"The first two months, there were good intentions, which were badly administered," said Alberto Xicotencatl, director of the diocesan migrant shelter in the northern city of Saltillo.

The visas attracted people, Escobar said, "But you have to also think of the situation in Central America, in the political crises. It wasn't just a matter of people realizing they could get a humanitarian visa."

Advocates working with migrants in Central America see no signs of the outflow slowing.

"Under normal conditions, it's normal that we attend to 2,500 to 3,000 migrants per year," said Carlos López, a coordinator with the Scalabrinian migrant shelter in Guatemala City. "So far this year, we've had 7,300" migrants passing through, he said.

Justice | Mexican bishops on migrants: 'We cannot turn ourselves into that wall'

Catholic groups: Obama's immigration order a good start, but much remains to be done