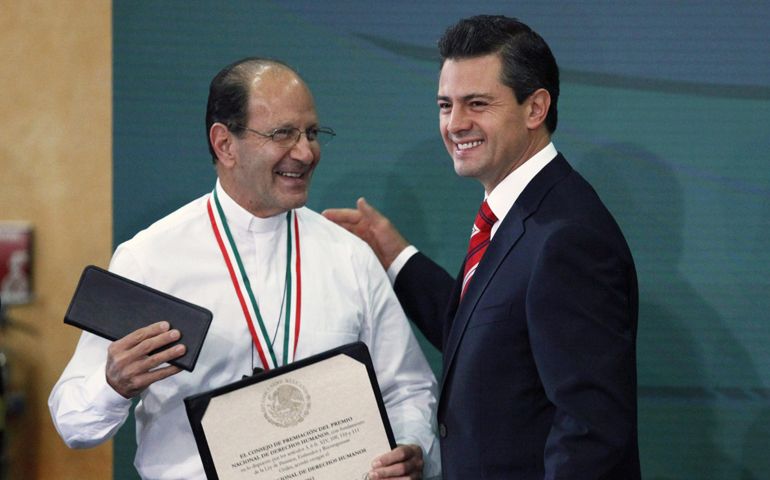 Fr. Alejandro Solalinde accepted the award from President Enrique Pena Nieto, whose party he has accused of previously persecuting him and failing to protect the migrants he serves.

Solalinde brought a blunt assessment of the current state of the country to the ceremony Monday at the president's residence but also struck a conciliatory chord.

"We have had a style of governing that must stay in the past. ... We need leaders, including bishops, and also servants at any level, that are with the grass roots, that are close to the people and that they listen to them."

Solalinde received his award as Mexico comes to a crossroads. Pena took office amid protests just 10 days earlier, but public opinion polls show a sense of optimism among Mexicans -- something expressed every six years with transitions of power -- that the new president can keep his promises to calm violence in the country, combat poverty and corruption and pull Mexico out of an economic malaise.

But Pena's party, which ruled for most of the last century and retook power after 12 years in opposition, has a checkered reputation for human rights and sour relations with the Catholic church.

Pena, who called Solalinde "a good Samaritan," said the priest's call for a more just Mexico and leaders closer to the people "are aligned with this government's project for the country."

That Solalinde would win such an award -- a medal and recognition -- surprised few. He surged into the public spotlight over the past five years for his defiance of corrupt local officials in Oaxaca state -- who he says belonged to Pena's own party -- and unwillingness to be cowed by organized crime, which threatened his Brothers of the Road shelter for migrants. He left the shelter and Mexico during the spring because of threats against him.

The National Human Rights Commission, which sponsored the prize, reported more than 11,300 migrant kidnappings -- often at the hands of organized criminal groups and abetted by crooked police and public officials -- over a six-month period in 2010.

Solalinde said in November that the Pena administration has reached out to those -- including Catholic priests and religious -- protecting undocumented migrants, but he expressed reservations at the time.

Political observers say publicly awarding the prize to Solalinde sets a new tone for the incoming presidential administration, which already has signed a comprehensive cooperation pact with the country's three main parties to achieve structural reforms in areas such as education, the economy and the energy sector.

"It's a gesture of political communication," said Aldo Munoz Armenta, political science professor at the Autonomous University of Mexico State. "The message is trying to convince those who are incredulous, in political terms, that the situation toward those seeking social justice has changed."