The nuclear reality and lost opportunity 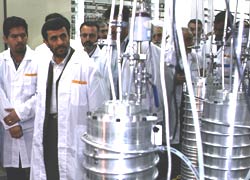 The new documentary "Countdown to Zero," just released in theaters, addresses an urgent reality few people think about often anymore: that we have entered a second nuclear age, post-Cold War.

Written and directed by award-winning documentarian Lucy Walker ("Blindsight," "Waste Land"), the scope of "Countdown to Zero" is as vast as it is frightening.

Since the United States developed and detonated the first atomic bombs in 1945, there has been no going back. At present, nine nations possess the atomic bomb and at least 40 countries have the technical know-how and capacity to build atomic or hydrogen bombs. In 1946, Robert Oppenheimer, the father of the atomic bomb, told a closed session of the Senate that the only way to prevent a nuclear bomb from going off in New York City was with a screwdriver -- "to open up every container that comes into the city."

Of even more concern is that a nuclear explosion could happen at any time through what the film describes as unintentional detonation by accident, error or misjudgment, and of course, by terrorism or use by rogue states. Many nations, particularly Iran and North Korea, have the possibility to enrich plutonium or uranium; the centrifugal technology hasn't changed much from the 1950s. The materials and ability are available; the only thing needed is a place big enough to enrich the nuclear material and build the bomb. Then because of materials that have been left lying around unguarded in the countries of the former Soviet Union, the nuclear threat hasn't diminished, it has increased. Enriched uranium, even outside a bomb, could cause tremendous damage.

Beginning with former U.S. CIA operative Valerie Plame Wilson, political and scientific experts offer chilling facts to get our attention. Accounts of near launches, seizure by terrorists, and black market trade up the ante for possible nuclear blasts.

"There are three ways to go acquire a nuclear weapon: You can steal a bomb, you can buy a bomb, and you can build a bomb," says Rolf Mowatt-Larssen, another former CIA operations officer (from 1983 to 2005).

Joe Cirincione, president of the Ploughshares Fund, states: "The good news is the arsenals have been cut in half. The bad news is there are 27,000 nuclear weapons in the world, and a lot of them are still on Soviet missiles and bombers, not technically aimed at us, but capable of being aimed at us in a manner of minutes. And thousands of those weapons are still on hair-trigger alert -- that is, the Cold War posture that said that your missiles had to be ready to launch with 15 minutes' notice, so if you saw an incoming attack, you had to be ready to let yours fly before they were hit. Both sides still have that hair-trigger, high alert, launch-on-warning -- different phrases for the same thing -- a rapid retaliation response."

It didn't have to be this way, however.

In the PBS three-part special "Turmoil & Triumph: The George Shultz Years," nothing stands out in Shultz's career as much as the failure of the summit meeting between Presidents Ronald Reagan and Mikhail Gorbachev in Reykjavik Oct. 11-12, 1986. Gorbachev offered to give up all nuclear arms if only the United States would restrict testing of Reagan's improbable "Star Wars" strategy to the laboratory. Reagan, with Shultz's concurrence, refused.

"Turmoil & Triumph" is an informative, laudatory, uncritical documentary about the public service of the congenial Shultz. The three-part program is not included in the award-winning and highly acclaimed "Independent Lens" series, known for its critical approach to issues and people. The most significant sponsor for "Turmoil & Triumph" is Free to Choose Media, a nonprofit production company that focuses "on issues of personal, economic and political freedom."

Shultz is an economist, statesman and businessman. Throughout his life he contributed his considerable learning, intelligence and talent in academia, to run corporations, and to serve as secretary of labor (1969-70), director of the Office of Management and Budget (1970-72), U.S. secretary of treasury (1972-74), all under President Richard Nixon, and secretary of state under Reagan.

Shultz survived all the political scandals of these years, from Watergate to the Iran-contra affair. It was almost as if Shultz wore a Teflon jacket. He refused to get involved with any wrongdoing; other staffers knew this and just worked around him. He was completely at the service of the presidents who were involved in cover-ups or failed world events such as the U.S. support of President Ferdinand Marcos of the Philippines, even as he was being voted out, or better, run out of office.

And then came Reykjavik, where "Countdown to Zero" and "Turmoil & Triumph" converge.

Both Reagan and Shultz knew that the Soviet Union could not economically compete with Reagan's Strategic Defense Initiative (SDI). Reagan, ever the anticommunist, refused to concede, as is clearly shown in "Turmoil & Triumph." When he asked Shultz, via a handwritten note, if he was wrong in his refusal, Shultz wrote in reply, "You are not wrong."

Gorbachev says about the failed Reykjavik meeting, "Reagan was the first to say this [to totally eliminate nuclear weapons from the face of the earth], and I told him I was of the same opinion. President Reagan and I both understood we could not allow this meeting to fail. But it did not work out and they called it a failure.

"So I reflect back on this period with sadness," continues Gorbachev. "And now there are over 40 countries that have the capacity to build a nuclear bomb. So this is how it ended, and we parted ways. In Reykjavik, we truly opened the door and peeked beyond the horizon."

Reagan and Shultz gambled with the future of the world at Reykjavik. Although Reagan and Gorbachev signed the Intermediate-Range Nuclear Forces Treaty (INF) in 1987, it was incomplete and limited. When the Soviet Union ultimately collapsed in 1991, untold amounts of nuclear matter and weapons were left unguarded and unaccounted for. They threaten the world today.

Shultz is currently an advocate for the elimination of all nuclear weapons. As "Countdown" notes, President Obama held a world summit in April this year in Washington and stated that any reduction in nuclear arsenals begins with the United States. A legally binding agreement for all nations is in the works and expected to be ready for signing by the end of the year.

"The only way to eliminate the threat of nuclear terrorism," states Valerie Plame Wilson, "is to eliminate all nuclear weapons in all countries." Some experts believe that every nation must remove the warheads of all missiles, and establish a joint warning system in case of accident. Others believe that a legally binding, intrusively verifiable agreement to rid the world of nuclear weapons will work. Still others believe in a gradual step-down process that builds up trust between nations as it reduces arms.

Most believe that public opinion is the greatest force in ridding the world of nuclear arms. And for this to happen, people must be aware of the situation. Students of current events and history will want to watch and critically evaluate both "Countdown to Zero" and "Turmoil & Triumph: The George Shultz Years."

Understanding from whence the current state of nuclear affairs arose is vital to understanding the political and practical ways we can all be part of the solution.

The ministerial exception is still the least bad option

A King's advice to the president on his second inauguration day