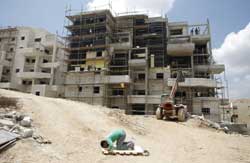 BEIT SAHOUR, West Bank
Growing up in the pastoral outskirts of Beit Sahour, Juliette Banoura, 23, watched as the Jebel Abu Ghanem hill across the valley, where her family owned a parcel of land and often picnicked on weekends, was transformed from an island of greenery into the bustling Israeli settlement of Har Homa, with its stone apartment buildings and paved roads.

Much of the land taken to build Har Homa belonged to Christian families like her own, she said; many of them are Catholic.

Now Banoura works as a research assistant at the Applied Research Institute-Jerusalem, a Palestinian research organization, and documents the growing expansion not only of Har Homa on Beit Sahour's northeastern border but also Israeli settlement expansion in the Bethlehem area. She has been documenting the opening of Mazmari Terminal road which is for the exclusive use of settlers, connecting the Gush Etzion settlements in the south to Har Homa, Tekoa and Neqodim -- the hometown of Israeli Foreign Minister Avigdor Lieberman -- in the north.

Banoura, who is Greek Orthodox and recently married into a Catholic family from Beit Jalla, would like to tell U.S. President Barack Obama about the settlement's expansion.

Her camera does not lie, she said.

"I take pictures of Har Homa and every time it is clear that there has been construction," she said, pointing to yellow bulldozers that appear to be preparing a site for a new project. "I can see every bit of construction taking place."

Nine new buildings have gone up in the few months since she last monitored the site, she said.

Noting that these areas are mentioned in the Bible as part of the biblical land of Israel, Israeli settlers and their supporters believe they have as legitimate a right to settle in the West Bank as they do within the internationally accepted borders of Israel inside the Green Line, which separates Israel and the Palestinian territories.

"There is no reason why someone should limit where I can live," said Rivka Singer, 26, an Israeli settler who was born and grew up in Efrat, near Bethlehem, and today lives with her American-born husband in Beit El near Ramallah. "I want to live in a place similar to the one where I grew up in a small community with clean air, not in the middle of a big city with pollution. There is no difference between me and someone living in (the central Israeli city of) Petach Tikva."

Singer and her husband are expecting their first child in November. She said that when they started to look for a larger apartment in Beit El for their expanding family they were confronted with a long waiting list of young couples in the same position with not enough apartments to go around. The situation was similar in Efrat. Finally they found a place in an addition to a home in the nearby settlement of Ofra, she said.

There are about 1,000 families living in Beit El, she said, totaling about 5,400 people. Though construction is continuing in the settlements it is not at the pace to accommodate natural growth, she said, and is at the point where there is not enough housing for young families.

"We are not talking of little hilltop outposts with one or two caravans," she said. "(Israeli Prime Minister) Netanyahu and Barack (Obama) are talking about freezes but they are not thinking about how it affects young couples. A construction freeze in the settlements has nothing to do with the peace process. This is not what the (Palestinians) want. They want Jerusalem and Jaffa and the Golan (Heights) and the Galilee."

From her perch overlooking Har Homa, Banoura reflected on the current state of the settlements.

That dream, she said, looking at the construction on Har Homa, gets more distant every day.

On eve of Trump visit, 'American carnage' alive and well in Lexington