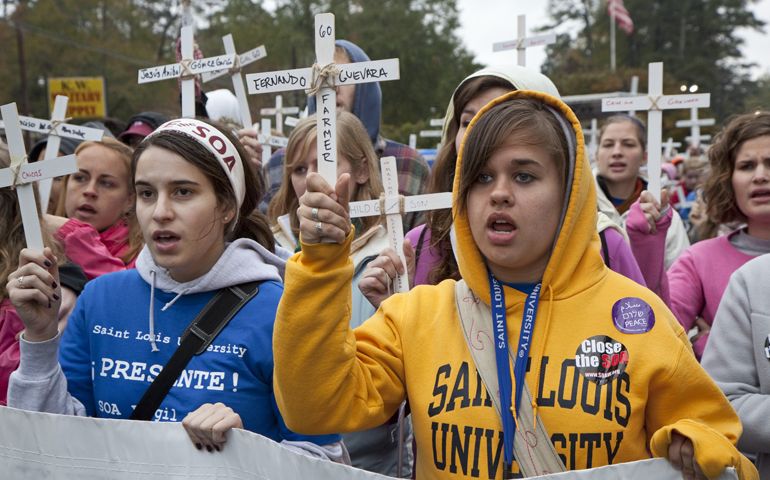 Young people rally at the gates of the Western Hemisphere Institute for Security Cooperation on Nov. 22, 2009, at Fort Benning, near Columbus, Ga. (CNS/Jim West)

For 25 years, thousands of protesters have gathered on a November weekend on a short stretch of Fort Benning Road, just outside the fort of the same name, to demand the closing of what was once called the School of the Americas, a Defense Department program that trains military personnel from Latin America. This year, the movement has another protest on its hands -- over the right to gather and protest.

The police department of Columbus, Ga., where the event is held, has told the movement, organized originally by then-Maryknoll Fr. Roy Bourgeois, that the city would not close the gates of the fort at that location as it has in the past. The city also said it will not close the street to vehicular traffic, that the gathering would have to be limited to 200 people and that they would have to remain on the sidewalks.

Chief Ricky Boren also denied permission for a stage and sound system to be erected in its usual spot in the middle of Fort Benning Road. He said he would be willing "to discuss other locations" that "might be suitable to accommodate your needs."

Bourgeois, who was dismissed by the Vatican from the priesthood in October 2012 for his support of women's ordination, sent an email to supporters Tuesday saying the movement would fight the restrictions and encouraging people to make travel plans. While the movement still identifies itself as SOA Watch, in 2001, the program was renamed the Western Hemisphere Institute for Security Cooperation.

A group of volunteers has sent a letter to negotiate with the department, and attorneys from the SOA Watch Legal Collective are also looking into the matter. The collective, Voss said, is a group of attorneys who, in the past, have helped protesters who cross the line into the fort as an act of civil disobedience with consequent legal issues.

The letter from SOA Watch to the chief noted that attempts by the town in the past to limit or deny the permit were overturned by the courts. In 2001, following the attacks on the World Trade Center, the city of Columbus went to court to halt the demonstration. "The US. Federal court ... denied the city's attempt to shut us down finding we had a constitutional right to demonstrate there," the letter noted.

"We would rather not go to court over this if at all possible," the SOA Watch letter said. "So we look forward to working with you to finding a way to resolve this situation in a manner that respects the rights of the people under our constitution."

The event this year would mark the 25th anniversary of both the protest and one of the events that sparked the first demonstration: the murder of six Jesuit priests at the University of Central America in El Salvador along with Elba Ramos and her 16-year-old daughter, Celina.

Back to Fort Benning

In honor of the SOA victims: 'No más! No more!'

The litany of Latin American martyrs