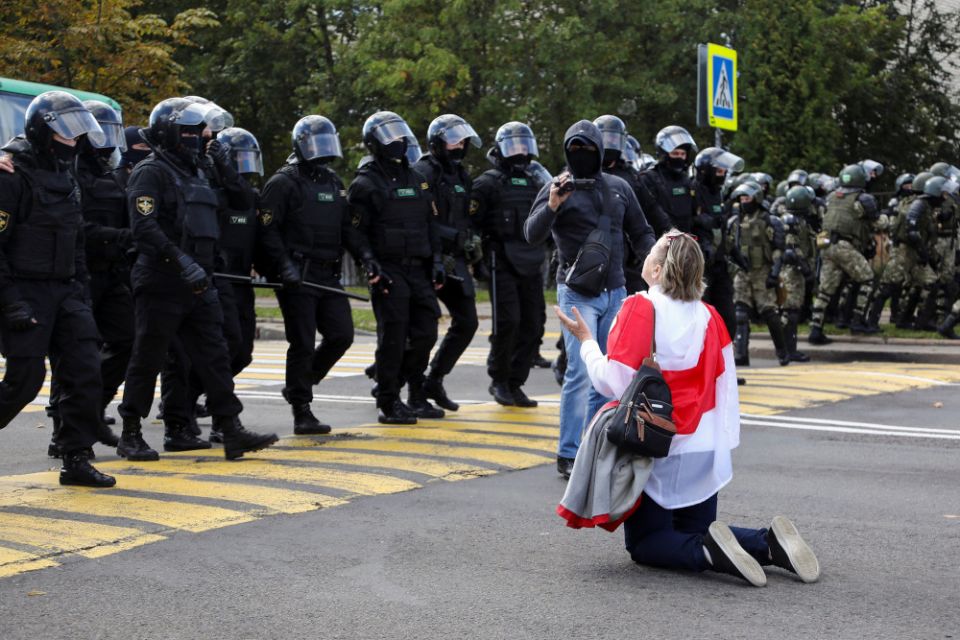 A protester draped in a flag of Belarus kneels in front of law enforcement officers in Minsk Sept. 13, 2020, during a protest against presidential election results. (CNS/via Reuters/Tut.By)

Vatican City — Expressing his concern about demonstrations taking place in many countries around the world, Pope Francis appealed for nonviolence, dialogue and the guarantee of civil rights.

"In these weeks, we are witnessing numerous popular protests all over the world — in many places — expressing the increasing unrest of civil society in the face of particularly critical political and social situations," the pope said Sept. 13 after reciting the Angelus prayer.

"While I urge the demonstrators to present their demands peacefully, without giving in to the temptation of aggression and violence," he said, "I appeal to all those with public and governmental responsibilities to listen to the voice of their fellow citizens and to meet their just aspirations, ensuring full respect for human rights and civil liberties."

The pope did not mention any specific city or country. However, two days earlier he had dispatched his foreign minister, Archbishop Paul Gallagher, to Minsk, Belarus, to show his closeness to the people and his support of the local church.

Pope Francis also may have had in mind the ongoing protests in the United States over police brutality and in support of the Black Lives Matter movement, and more than a year of pro-democracy protests in Hong Kong.

In areas where there are protests, the pope asked Catholic communities, and especially their pastors, "to work for dialogue — always in favor of dialogue — and in favor of reconciliation."

Also after his recitation of the Angelus, the pope spoke to visitors in St. Peter's Square about the fires Sept. 9 that destroyed the Moria refugee camp on the Greek island of Lesbos, displacing some 12,000 asylum-seekers and, as the pope said, leaving them "without a shelter, even a precarious one."

"I still remember my visit there" in 2016, he said, and the appeal he, Orthodox Ecumenical Patriarch Bartholomew of Constantinople and Orthodox Archbishop Ieronymos II of Athens made to other European governments and citizens "to do our part toward giving migrants, refugees and asylum seekers a humane and dignified welcome in Europe."