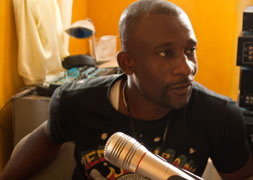 PETITE RIVIÈRE DE L’ARTIBONITE, HAITI -- It is no wonder that after the attendant terrors of January, the fertile valleys of Haiti’s north beckoned those who survived the earthquake that had laid waste Port-au-Prince and other Haitian cities.

This is green, lithe, quiet country, and if for no other reason, its seeming peace can be a balm for those seeking relief from the Haitian capital’s congestion and chaos.

But today, more than a half year after the quake, this region’s problems are emblematic of the long-term challenges Haiti faces as it tries to recover from not only the Jan. 12 earthquake, but from what Scott Campbell of Catholic Relief Services calls a “structural disaster that has been there for years.”

In this case, the issue is food, or lack of it, even where there was once abundance. Lack of food is has become a perennial problem for a country in which at least a quarter of the population is chronically undernourished and where one in five persons dies before age 40.

“Food security in rural Haiti was a critical issue before the earthquake, and it continues to be,” said Catholic Relief Services food security advisor Dina Brick, noting that Haiti has the worst indicators in the Western Hemisphere for maternal and under age 5 health, and that about a quarter of all Haitian children are stunted, a telling sign of malnutrition.

With those indicators an ever-present reality in Haiti, food quickly became a key issue during the initial response to the earthquake.

That was certainly true for Fontil Louiner, a 39-year-old video technician who, like many other Haitians, worked and lived in Port-au-Prince but had maintained ties with his hometown -- in this case, Petite Rivière in the northern department, or province, of Artibonite, located about three hours north by car from Port-au-Prince.

As part-time manager and DJ at a local, community-based radio station in Petite Rivière called Radio Family, Louiner traveled back and forth from Port-au-Prince, and he and his colleagues organized a community feeding program to provide meals for the thousands who had fled Port-au-Prince in the days and weeks after the catastrophic quake. (The United Nations estimated that perhaps as many as 500,000 people left the capital for rural areas after the earthquake.)

Though exact numbers remain sketchy, at least 3,000 and perhaps as many as 8,000 fled to Petite Rivière to stay with family and friends. “We had no other choice,” Louiner said. “We couldn’t stay.”

But the flight back to Port-au-Prince has already begun. About half of the total of those who moved to Petite Rivière have since left. And with that, Radio Family’s feeding program has been cut back: A daily program that was feeding 500 people has been reduced to a few days a week.

Many people still have family in Port-au-Prince; some still have homes, and humanitarian assistance remains easier to access in the capital. There is also a nagging sense that, despite initial talk of decentralizing a heavily centralized nation, Haiti’s future -- certainly the immediate future -- still belongs in the capital.

There is also something of a practical issue: Most of those fleeing Port-au-Prince who moved in with “host families” of relatives and friends no longer had any direct ties to the land itself, said Brick. They were no longer farmers.

“Many had no sustainable economic activities in these rural areas -- they had nothing to do -- and so left their host households,” said Brick. “They may have also wanted to reduce the strain they recognized they were bringing to their host families.”

The pressures and strain are real; a recent survey conducted of households outside of Port-au-Prince by Catholic Relief Services and other humanitarian groups indicated that families are reducing the number of daily meals they are consuming -- nearly half of households reported the number of meals dropped from two and a half to one and a half, Brick said. That, she added, was “a sign of serious stress, and of continued vulnerability for a large number of households.”

The Petite Rivière feeding program experienced similar problems. Keeping the program going came up against a long-standing reality. Petite Rivière itself has problems with what the humanitarian community calls “food security” -- the availability and access to food.

The irony, even tragedy, of the situation is that Petite Rivière sits amid plenty. The Artibonite Valley is sometimes called Haiti’s “rice bowl,” but many of its residents are no strangers to hunger. Said Sama Odmarc, a teacher and journalist, “We’re in great need of food here.”

How did this happen?

For years, there has been debate over whether it was wise for Haiti to embark on a policy of trade liberalization that dates from the 1990s -- a policy of reform that proponents argued was needed to stabilize the country after years of political and social upheaval. The Haitian government “had no choice but to open its economy as part of the policy reforms proposed,” said a 2006 study by the UK-based humanitarian organization Christian Aid that criticized the results of trade liberalization.

Certainly the practical results of such reforms -- reducing tariffs on imported food, for example -- had some positive results for urban residents who, as the Christian Aid study noted, benefited from cheaper food prices.

But the overall social cost to Haiti has been grave, the study concluded. Once self-sufficient in food, Haiti was, by 2006, importing food more than any other product, and was using 80 percent of its export earnings to pay for food imports.

The concomitant loss of agricultural production has crippled rural areas like Artibonite, with loss of farm income making it hard for people to feed themselves. “In this environment, it is becoming more and more difficult to buy food,” the study said. “Agricultural liberalization has contributed to hunger becoming more widespread in both rural and urban areas.”

These related pressures are all-too familiar in Petite Rivière and Artibonite. Imported rice from the United States has eroded the domestic rice industry, putting increasing pressure on local farmers, who find it hard to compete in a market flooded by cheap rice, residents say. This puts more burdens on farmers as they try to secure credit for basics like fertilizer.

In turn, this makes it harder for farmers to diversify their crops, narrowing what people can eat. The local diet, residents say, is heavy on rice, corn meal, sweet potatoes and millet, but contains too little protein.

While the longer-term issues of food and hunger in rural areas were not highlighted much during the recent media coverage of the six-month anniversary of the earthquake, they deserve to be, said Campbell, who is overseeing Catholic Relief Services’ current reconstruction and recovery efforts in Haiti.

“Nothing in this emergency can be looked at in isolation,” said Campbell, noting that the long-term issue of food security is part of a “web of complexity” that, in effect, lies just below the current catastrophe -- a “structural disaster” that not only includes food and hunger, but related issues of poverty, corruption and weak governance, he said.

Campbell said resolving the problem of hunger and food insecurity is a cornerstone to solving some of Haiti’s long-term problems. “A long-term solution is for Haiti to produce its own food,” he said.

The World Food Program, the food distribution arm of the United Nations, is among the agencies moving beyond emergency food assistance to developing what it calls a “longer-term food security strategy,” that includes generating more localized production for Haitian farmers. Other strategies being put forward by humanitarian groups include addressing the issue of affordable credit as well as supporting food cooperatives as a way to boost local food supplies.

The key, they and others say, is opening up economic opportunities outside of Port-au-Prince. In a situation where people in rural areas have had to flee to Port-au-Prince just to make a living, “making investments in agricultural inputs such as good seed, tools and fertilizer could turn this tide and redistribute Haiti’s population in a more sustainable way and also empower Haitians to meet their own food security needs,” said Lisa Rothenberger, who heads the humanitarian relief program for the American Baptist Churches, a U.S. Protestant denomination.

The need to retool rural areas and decentralize the country were prominent topics in February when Fontil Louiner and his colleagues huddled in Radio Family’s small studio and spoke of the problems facing Petite Rivière. They discussed what Louiner called “the issue of rice” -- how a once-flourishing industry had been slowly left to whither.

In a return visit to Petite Rivière in late June, these concerns were even more pronounced. The issue of food touched everything.

Those around the table -- farm advocates and activists -- mentioned the real and palpable challenges of the lack of reasonable farm credit and of recovering from a cycle of hurricanes in recent years that caused massive flooding and crippled the region.

This accumulation of problem upon problem was confirmed by Arnold Alcimé, an octogenarian farmer who, after greeting visitors to his small two-acre plot of land, rattled off a long list of worries facing him and other farmers -- drainage problems in the face of increased floods; “usury” loans that constantly keep him and others mired in debt; and the exorbitant costs of new equipment.

Those like agronomist Nicolas Altidor and the Rev. Raymond Mesadieu, another activist, believe better and expanded options for farmers are necessary. “It’s something simple,” said Altidor. “Help the planters, give them support like fertilizer, reasonable credit instead of usury, and fix the drainage so that fields are not always flooding.”

Mesadieu said that is something the government should do. But he and others shook their heads emphatically when asked if they had much faith the Haitian government would, or could, do much to assist small farmers.

Such pessimism is not unusual in Haiti, though it is balanced by the day-to-day grit and determination of people as they go about their lives amid great difficulties.

The recent CRS survey gave a picture of some of those daily challenges. One finding was that Haitian women -- important traders and vendors in their local economies, with many selling fruit, candies, gum and the like -- are finding it hard to maintain their small-scale vending “due either to a lack of demand, or increasing difficulties gaining credit, or higher repayment rates,” Brick said.

That is deeply worrying, Brick said, because it makes clear that the earthquake exacerbated the vulnerability and tensions in households already experiencing chronic hunger, malnutrition and poverty.

In the months and years to come, debate is likely to increase on how best to solve these problems. Brick, among others, echoes the opinion of the farm activists in Petite Rivière that, at the least, efforts must be made to support small farm families.

“At the same time, we need to invest more in building alternative economic options for poor farmers,” she said, with an eye on reducing Haiti’s dependence on imports.

Whatever is done, life must be made easier and better for rural Haitians, said the residents of Petite Rivière, who expressed frustration about the country’s almost maddening centralization -- of how even getting a driver’s license requires a costly trip to Port-au-Prince.

If people could stay in rural areas, they would, said agronomist Altidor. “But there’s still a feeling that you can make money there [in the city], unlike here in the provinces.”

[Chris Herlinger, a New York freelance journalist who writes frequently on humanitarian issues for NCR, was recently in Haiti on assignment for Church World Service and the Geneva-based ACT Alliance.]

Related coverage from NCR on Haiti: