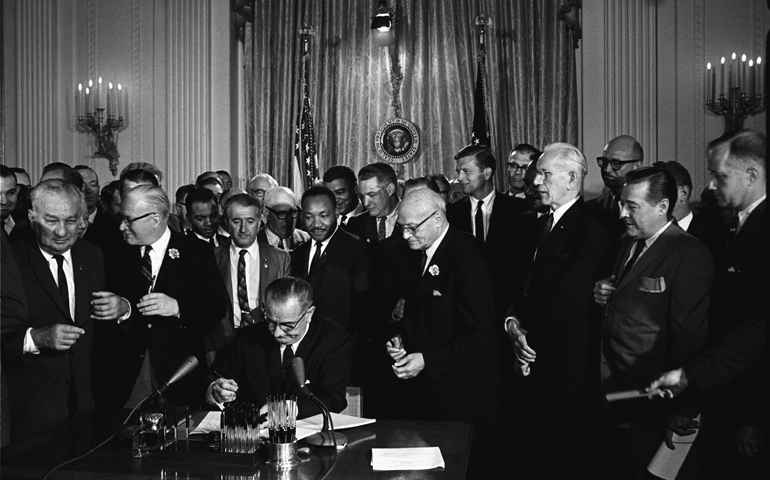 Fifty years ago, when the Civil Rights Act was signed into law July 2 by President Lyndon Johnson, two Louisiana-born men did not feel the earth move, but they knew it was the beginning of a time of change.

Norman Francis, president for student affairs at Xavier University in New Orleans at the time, described the law's passage as part of a "watershed year."

After living for more than three decades "under Plessy," as he says, referring to the Supreme Court decision upholding racial segregation and "separate but equal" facilities, Francis said it was hard to imagine that he had graduated from law school but still "couldn't walk into the front door of a restaurant until 1964," when the civil rights law prohibited racial segregation in schools, workplaces and public facilities.

But even graduating from law school was no small matter. Francis was the first African-American admitted to law school at Loyola University New Orleans in 1952, and he is just reading now about the efforts by local priests that went into getting him admitted.

Now, his name is almost synonymous with Xavier University, the country's only historically black Catholic university, where he attended as an undergraduate and held various positions until being named president in 1968, a role he was asked to assume on the day of the Rev. Martin Luther King Jr.'s assassination.

In an interview with Catholic News Service on the university's campus June 12, the longtime president, who is 83, showed no interest in retiring. He was quick to praise the school, founded by St. Katharine Drexel and her Sisters of the Blessed Sacrament, not only for its educational accomplishments but also for quickly getting itself out from under 6 feet of floodwater from the breached levees following Hurricane Katrina.

Francis, born in Lafayette, La., along with his four siblings, said the separate-but-equal segregation "was a monster of many proportions on the human spirit." He also said his parents, who never graduated from high school, "had to be the greatest psychologists in the world to have us keep our bearings while going through this."

They always stressed the importance of education and faith, he said, and it seems the Francis children took this message to heart.

"We never lost our faith; our faith brought us through all of it," he said of his siblings, including his brother Joseph, a priest with the Society of the Divine Word who became one of the nation's first black Catholic bishops.

The college president said his brother was active in the civil rights movement along with a number of priests and nuns who took part in protests and marches and were a "credit for the church."

Auxiliary Bishop Joseph Francis of Newark, N.J., who died in 1997, chaired the committee that wrote the 1979 U.S. bishops' pastoral letter on racism, "Brothers and Sisters to Us," which called racism a sin.

The bishop gave talks around the country years after the pastoral letter was issued, challenging Catholics not to just talk about eradicating racism but to do more about it.

Norman Francis said if his brother were alive today, he would likely say that the "church has made great progress," but he also wouldn't give the church a pass.

"It's hard to excuse that we haven't gone as far as we should have," he said, adding that his brother would particularly be concerned about the lack of young African-American seminarians.

Retired Bishop John Ricard of Pensacola-Tallahassee, Fla., who is president of the National Black Catholic Congress, knows all about that. The 74-year-old bishop, who retired in 2011 for health reasons, is rector of St. Joseph's Seminary, the Washington seminary of his order, the Josephites. The order was founded to serve newly freed slaves in the United States and now ministers in African-American communities. The bishop said the order's new seminarians are primarily from African countries.

Ricard, who grew up in Baton Rouge, La., was a seminarian in Washington when the Civil Rights Act passed during what he described as "a very tumultuous, but very productive time."

"I grew up in the segregated South, where everything was defined by race and segregation," he told CNS June 18, adding that he always sensed the "law enforcement was there to maintain segregation and if you crossed the line, you'd be in big trouble."

When he came to Washington, it was very different because the city was "in transition, on the move -- and like the rest of the country -- in great change."

After the Civil Rights Act passed, he remembers how different it was for him and the other African-American seminarians to make the drive from Washington to the South, where "you could go to hotels and restaurants" for the first time.

The bishop noted that many church leaders were at the forefront in integrating schools and fighting against racial discrimination before the civil rights legislation passed because they viewed segregation as "incongruous to what it means to be Christian."

And today, he said, the "church in many ways is still a leader" in these efforts, but its involvement is less direct.

The challenge, he said, is that "racism is still a part of the fabric of our environment -- of the air we breathe. It's still part of the DNA of most Americans."

He also noted that racism is so embedded in American society that "no one group is going to solve it. ... We have to be in this together."

And cooperation alone won't be enough.

As he put it: "It's going to take a lot of courage, forethought, imagination to address this well."