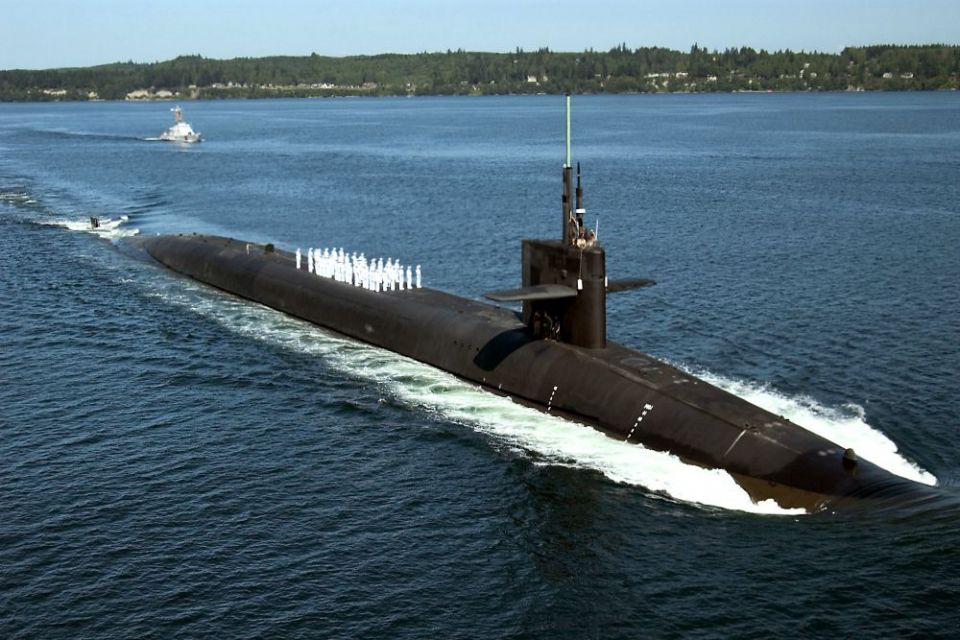 Sailors assigned to the Ohio-class fleet ballistic missile submarine USS Pennsylvania (SSBN 735) spell out the word "Fifty" as they return to Naval Base Kitsap, as the vessel completed its 50th patrol, July 2005. (U.S. Navy/Chris Otsen)

In recent months, much of the world has begun to ramp up efforts toward nuclear disarmament, but the United States is showing no signs of cutting back its nuclear program any time soon, citing the role nuclear deterrence still plays in maintaining security and the need for updating its nuclear infrastructure.

In February, the U.S. State Department released a Nuclear Posture Review, a statement of the military's current nuclear policy that presidents have ordered early in their first term since the end of the Cold War.

Comparing this nuclear posture review to the 2010 review released by the Obama administration, "is almost like a Rorschach test," Sharon Squassoni, a research professor at the George Washington University and member of the Science and Security Board of the Bulletin of the Atomic Scientists, told NCR. "Many people look at these things and say 'There's more continuity than change,' and there's other people who say 'Oh, it's enormously different!' "

The review acknowledges "the long-term goal of eliminating nuclear weapons" but also a "deterioration in the threat environment" since the beginning of former president Barack Obama's first term in office, as well as the "return of Great Power competition" with the rise of China and Russia.

According to the review, "nuclear weapons infrastructure has suffered the effects of aging and underfunding," with nearly a quarter of it dating back to the Manhattan Project, resulting in a need for more resources to update them. The ability to produce new nuclear weapons, without relying on parts from retired dismantled ones, is one area in which the review specifically calls for improvement. 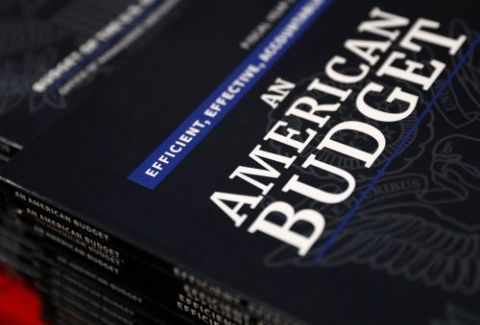 Copies of President Donald Trump's budget for the U.S. government for fiscal year 2019 lay on a display table Feb. 12 at the U.S. Government Publishing Office in Washington. (CNS/Reuters/Leah Millis)

President Donald Trump's proposed budget for fiscal year 2019, released in mid-February, calls for the greatest military spending since 2011, and it allocates significant funds for the modernizing and expansion of the country's nuclear program. The administration's budget proposal "requests $24 billion to modernize and sustain the three legs of the nuclear triad," meaning nuclear capabilities on land, sea and air, saying that it "funds the modernization of nuclear weapons and ensures that the U.S. nuclear force is second-to-none."

The review and budget proposal come after a year in which both the international community and the Catholic Church signaled that it is time for a serious discussion of nuclear disarmament.

The Treaty on the Prohibition of Nuclear Weapons opened for signature at the United Nations last September, and has since been signed by dozens of countries. In October, the International Campaign to Abolish Nuclear Weapons was awarded the Nobel Peace Prize, and in November, Pope Francis told a conference at the Vatican that the threat of a nuclear weapons, "as well as their very possession, is to be firmly condemned."

During the Cold War, the church had accepted the morality of possessing nuclear weapons only when their sole purpose is the deterrence of nuclear attack. However, in recent years, Francis has been signaling that this "strict condition" for accepting nuclear weapons is not being met.

Recently, the U.S. seemed to be following the church's thinking on the issue. "The Obama administration was deemphasizing the use of [nuclear weapons] against non-nuclear targets," Jerry Powers, director of Catholic peacebuilding studies at the University of Notre Dame told NCR. The 2010 nuclear posture review stressed "reducing the number of nuclear weapons and their role in U.S. national security strategy."

"The idea was that as you reduce your reliance on those weapons, it will make it easier to get rid of them ultimately," Squassoni said.

However, U.S. leadership began to drift away from the church's stance later in Obama's presidency, as efforts to modernize the nuclear infrastructure began. While Squassoni calls some modernization "long overdue," both she and Powers are critical of some of the programs proposed in the review, including plans for building new stand-off cruise missiles and submarine-based missiles.

The most recent review, "really broadened the circumstances under which [the U.S.] would consider using nuclear weapons," Squassoni said. In addition to deterring both nuclear and non-nuclear attacks, the administration said that nuclear weapons also assure the country's allies, hedge against the future, and ensure the "achievement of U.S. objectives if deterrence fails." It even suggests that a more robust nuclear program would be a step toward disarmament, forcing other nations into discussions about denuclearization. 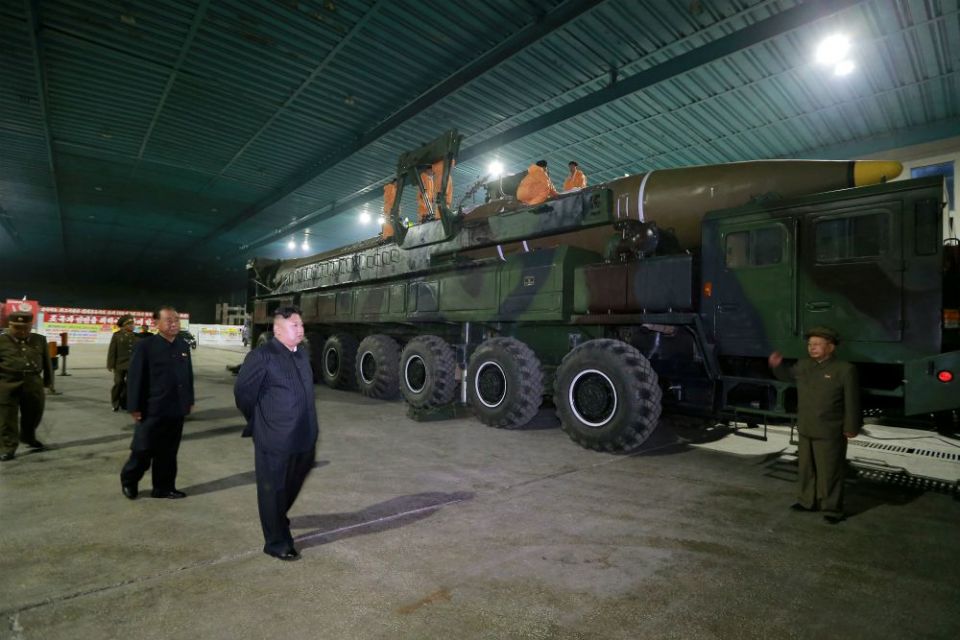 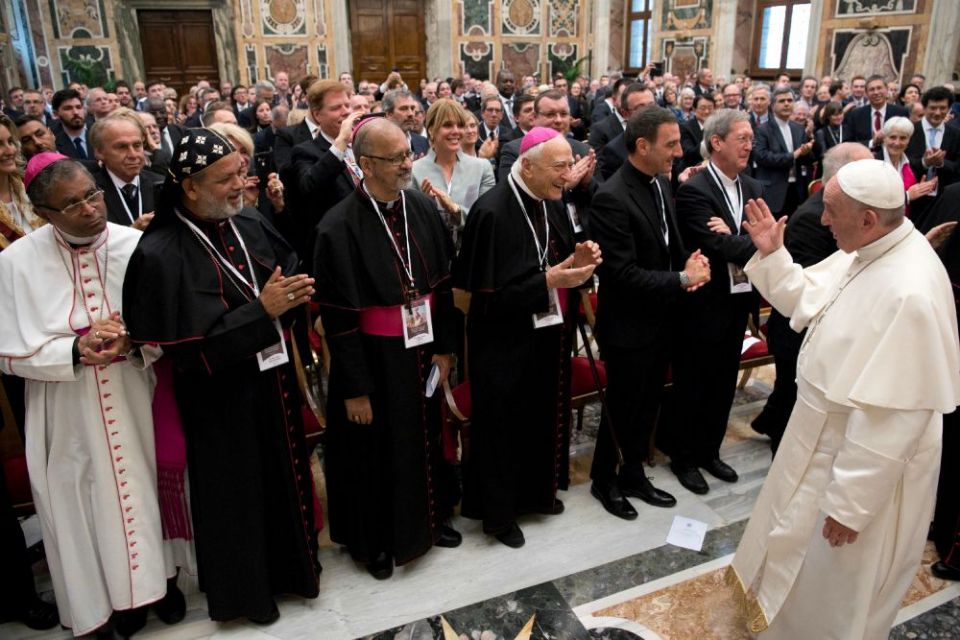 Pope Francis greets attendees at a conference on building a world free of nuclear weapons, at the Vatican Nov. 10, 2017. The conference brought together 11 Nobel laureates, top officials from the United Nations and NATO, diplomats from around the world, experts in nuclear weapons and the disarmament process, scholars, activists and representatives of bishops' conferences. (CNS/L'Osservatore Romano)

Although the administration's position contrasts with that of the pope and the U.N., it is consistent with the rhetoric embraced by the president both on the campaign trail and in the White House. According to reports from inside the White House, Trump blasted the New START Treaty, which binds the U.S. and Russia to arms reduction benchmarks, in his first conversation with Russian President Vladimir Putin after his election, blaming Obama for negotiating "a really bad deal" for the U.S.

"While Russia initially followed America's lead and made [similar] sharp reductions in its strategic nuclear forces," the review said, "it retained large numbers of non-strategic," or "low-yield" nuclear weapons. These weapons are more versatile and more easily used in warfare. "Expanding flexible U.S. nuclear options now, to include low-yield options," the review states, "is important for the preservation of credible deterrence against regional aggression."

In addition to the increased threat from China and Russia, the review also raises concerns about nuclear terrorism and the growing nuclear capability of other hostile nations, like Iran and North Korea.

In response the new and increasing threats, the review lays out plans for "strengthening deterrence" in both Europe and Asia. It proposes a number of steps toward achieving this goal, but maintaining a strong nuclear presence on the world stage for the long term is cited as essential in both cases. 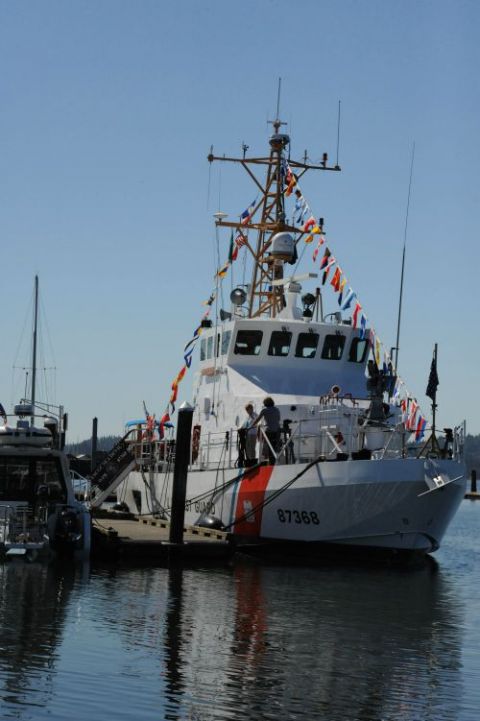 Powers said he is concerned that some of the policies embraced in the review will set the cause of peace back. Expanding the U.S. military's arsenal of low-yield weapons "could lead to an arms race," he warns. He also said that the U.S. should consider extending the New START Treaty past its planned expiration in 2021, ratify the Comprehensive Nuclear-Test-Ban-Treaty, and adopt a clear no-first use policy. "There is no morally responsible reason you would use nuclear weapons against a non-nuclear threat," he said.

Although the elimination of nuclear weapons remains a stated goal of U.S. military leaders, strengthening and modernizing the nuclear program will remain the primary short-term objective; "there is no higher priority for national defense," the review said.

Powers said that while the U.S., as the world's preeminent superpower, bears the responsibility of leading the issue, "it would be a mistake to suggest that what the Holy See is saying applies mainly to the United States; it applies to all the nuclear powers."

"The pope is not asking that any [one country] give up its nuclear weapons tomorrow," he added. "The Vatican's position has always been that you need a mutual, verifiable treaty of global disarmament."

An earlier version of this story stated the United States had not signed the Comprehensive Nuclear-Test-Ban-Treaty.  The U.S. did sign the treaty in 1996, but has not ratified it.