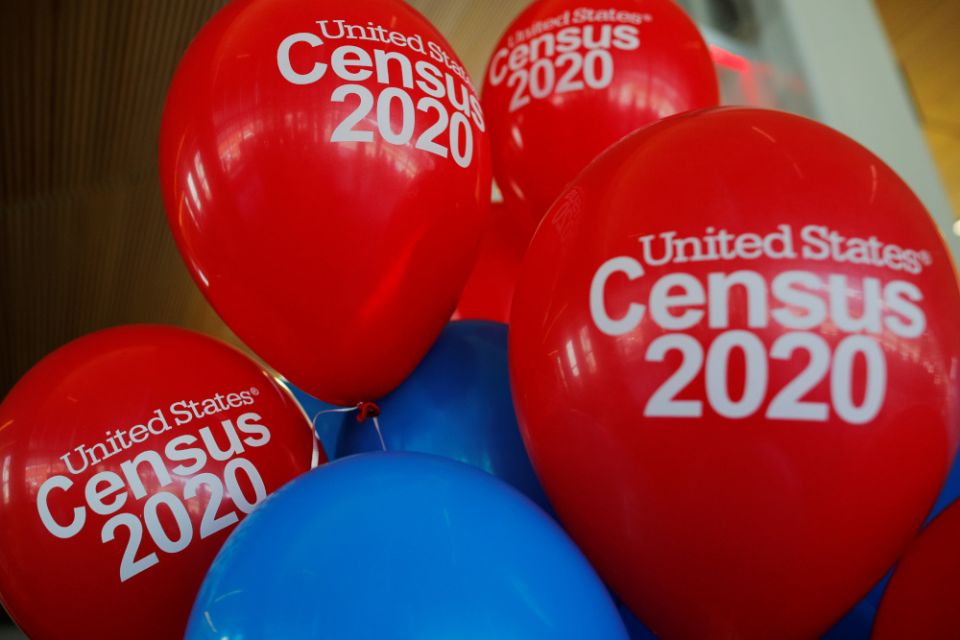 Balloons decorate an event for community activists and local government leaders to mark the one-year-out launch of the 2020 census efforts in Boston April 1, 2019. In a June 27 decision, the U.S. Supreme Court sent a case about adding a citizenship question to the census back to a lower court saying the Trump administration's reasons for adding the question were unclear. (CNS/Reuters/Brian Snyder)

Washington — The Supreme Court, for now, blocked the Trump administration's added citizenship question to the 2020 census, sending the case back to a lower court.

A 5-4 ruling handed down June 27, which was written by Chief Justice John Roberts and joined in part by the other justices, said the administration's reason for adding the citizenship question "seems to have been contrived."

The case is not completely closed because the government still has the chance to offer more acceptable reasons for the added question, but it is against time because census forms were to be printed in early July.

The census case hit a potential twist in late May, a month after oral arguments, when newly submitted evidence from the files of a deceased Republican strategist put the citizenship question in another light: as a means to create an advantage for whites and Republicans in future elections.

Then in late June, a federal appeals court in Maryland allowed a lower court to study the background of these files.

The government had asked the Supreme Court to rule on the census dispute by the end of June, so that it can finalize the census questionnaire and get the forms printed in time for distribution next year.

During oral arguments about the added census question in April, Justice Sonia Sotomayor said: "There's no doubt people will respond less" to the census questionnaire with a citizenship question, a point which she said "has been proven in study after study."

Justices Neil Gorsuch and Brett Kavanaugh said citizenship questions were common in other countries and had been on the U.S. forms over the years.

Both Roberts and Justice Samuel Alito said the decision by Commerce Secretary Wilbur Ross to add a citizenship question – for the first time since 1950 to improve compliance with the Voting Rights Act – seemed reasonable. But Justice Elena Kagan said Ross' reason for adding this question seemed "contrived."

In its defense, U.S. Solicitor General Noel Francisco said the information it would provide would help enforce the Voting Rights Act. When asked about the question leading to potentially less participation, he said: "There is always going to be a trade-off."

Lawyers for New York, immigrant advocacy groups and the House of Representatives stressed that the question would prevent noncitizens from filling out the census and have a negative financial and political impact on communities with large immigrant populations.

A similar argument was raised in a friend-of-the-court brief opposed to the citizenship question filed by Catholic Charities of the Archdiocese of New York and Catholic Charities of Brooklyn and Queens in New York. The brief stressed that the added question would cause a "net differential undercount of people who live in noncitizen and Hispanic households" and would result in a "drastic and unwarranted reduction in funding in states and cities with large populations of such persons" and also would impact social service agencies.

"The Catholic Church and other service providers rely on the national census to provide an accurate count in order to effectively serve those in need," said Dewane.

Bishop Vasquez said all people should be counted in the census, regardless of their citizenship and he said "proposed questions regarding immigration status will obstruct accurate census estimates and ultimately harm immigrant families and the communities they live in."

By one government estimate, about 6.5 million people might decide not to participate in the census with the added citizenship question.

The census is rooted in the text of the Constitution, which requires an "actual enumeration" of the population every 10 years. It determines federal funding for roads and schools, congressional districting and number of congressional representatives.

Roe v. Wade may be in peril, but future of anti-abortion movement is unclear

Acting DHS head shouted down by protesters at immigration conference