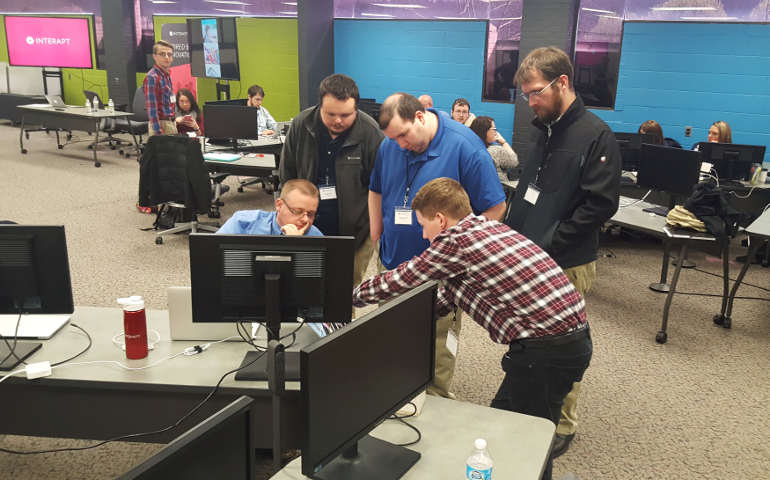 PAINTSVILLE, Kentucky -- President Donald Trump has proposed eliminating funding for economic development programs supporting laid-off coal miners and others in Appalachia, stirring fears in a region that supported him of another letdown on the heels of the coal industry’s collapse.

The 2018 budget proposal submitted to Congress by the White House on Thursday would cut funds to the Appalachian Regional Commission (ARC) and the U.S. Economic Development Administration. The Washington-based organizations are charged with diversifying the economies of states like West Virginia and Kentucky to help them recover from coal’s decline.

The proposed cuts would save the federal government $340 million and come as the Republican president seeks to slash a wide array of federal programs and regulations to make way for increased military spending.

But they are perceived by some in Appalachia as a betrayal of his promises to help coal miners.

"Folks that live in Appalachia believe that the ARC belongs to them," said federal ARC Co-Chair Earl Gohl, bemoaning the proposed cut. "It's really their organization."

Republican Congressman Hal Rogers, who represents eastern Kentucky's coal counties, said he would fight to restore the funding when Congress negotiates the budget later this year.

"It's true that the president won his election in rural country. I would really like to see him climb aboard the ARC vehicle as a way to help us help ourselves," Rogers said.

Four hundred of the 420 counties ARC operates in voted for Trump in November's election.

The 52-year old agency has run more than 650 projects in Appalachia's 13 states between 2011 and 2015 costing hundreds of millions of dollars. Its programs, some launched under Democratic former President Barack Obama, are expected to create or retain more than 23,670 jobs and train and educate over 49,000 students and workers, the organization said.

Trump vowed during his campaign that the White House would put American coal miners back to work, in part by cutting environmental regulations ushered in by Obama, mainly aimed at curbing climate change but characterized by Trump as hampering the industry.

However, many industry experts and coal miners doubt that rolling back regulation alone can revive the coal mining industry, which faces stiff competition from abundant and cheap natural gas in fueling U.S. power generation.

Rigel Preston, a 38-year old former surface miner, said ARC programs helped him land a job as a paid intern at technology company Interapt after he lost his benefits.

He said that, while he and many members of his family in eastern Kentucky hope Trump will deliver on his promise to revive the coal industry, he believed the region's future lay elsewhere.

"From my experience from the coalfield, I know that that is a finite job and coal will run out eventually," Preston said.

Preston was among several former miners and other east Kentuckians at an event in Paintsville this week held by Interapt and ARC to announce Interapt's plan to hire another hundred people from the region this summer.

Interapt Chief Executive Ankur Gopal, a 37-year-old tech entrepreneur, expanded his Louisville-based company out to eastern Kentucky with the vision of lifting that part of his home state out of economic stagnation.

"There is a skilled workforce and opportunity that can be found here in eastern Kentucky," Gopal said. "This is not just a bunch of people that are waiting for coal mines to reopen."

ARC has worked on economic development in Appalachia since its founding in 1965 as part of President Lyndon Johnson's "war on poverty." In recent years it has focused on helping states in the region deal with the coal industry's sharp decline and the loss of 33,000 coal mining jobs between 2011 and 2016.

So far, ARC has had no official contact from the president's transition teams, said co-chair Gohl, an Obama appointee who remains in the job.

The cuts to its funding were recommended to the administration by the Heritage Foundation, a Washington-based think tank. Nick Loris, an energy fellow at the foundation, said the work that ARC and the Economic Development Administration do should be devolved to state and local governments "to encourage transparency and reduce duplicative federal spending."

States have said their budgets are already strapped.