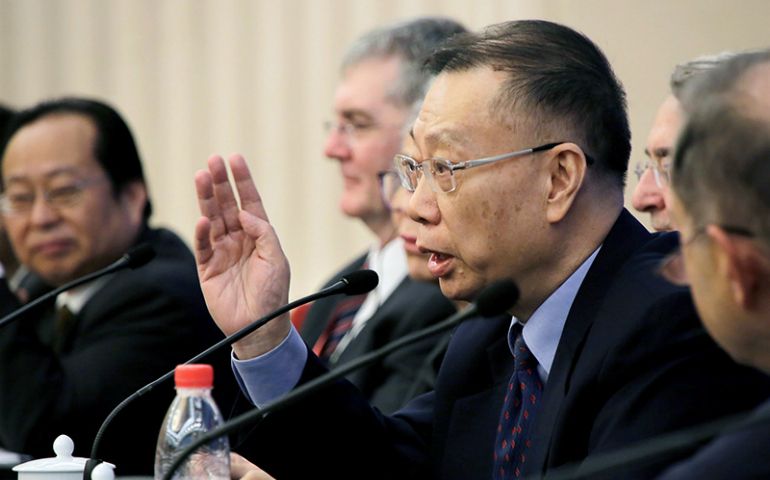 Dr. Huang Jiefu attends a news conference during the 2016 China International Organ Donation Conference at the Great Hall of the People in Beijing Oct. 17, 2016. (RNS/courtesy of Reuters/Jason Lee)

Vatican City — The Vatican has defended its decision to invite China to an organ trafficking summit after an outcry from medical experts and ethicists about the country's record of using executed prisoners as organ donors.

Huang dismissed claims that organs were still being extracted from prisoners or ethnic minorities in a state-sponsored program in China.

"That is a rumor," Huang said outside the summit. "I am the person who arranged to stop using prisoners' organs from January 2015," he said Feb. 7, the first day of the conference. "[There have been] no more since my announcement, no doubt."

In his formal address at the Vatican, Huang invoked the ancient philosopher Confucius to say that the world would see that China was "mending its ways" and stressed that the government had cracked down on offenders.

He said the Chinese government had investigated 18 medical institutions, revoked 50 medical licenses and arrested 174 criminal suspects between 2007 and 2016.

But Professor Jacob Lavee, president of Israel's Transplantation Society and director of the heart transplant unit at Sheba Medical Center in Tel Aviv, disputed Huang's claims and said they were impossible to confirm.

Lavee, who spearheaded legal reform in Israel that stopped transplant tourism, called for "independent scrutiny" of Chinese practices and questioned why Huang was invited.

"Given his personal record and the fact that he still does not admit the use of organs of prisoners of conscience, he should not have been invited," Lavee told RNS.

But Archbishop Marcelo Sanchez Sorondo, chancellor of the academy, on Wednesday defended the Vatican decision: "Some might think that the Vatican was covering up China's evil practices, but that is not so."

Wendy Rogers, a medical ethics expert at Macquarie University in Australia and head of an advisory committee investigating organ theft in China, did not attend the conference but also criticized Huang's inclusion.

"Providing him with a prestigious platform like this gives credibility to his claims of reform and helps to erase China's bloody history," Rogers said. "He should not be allowed to speak unchallenged."

The international advocacy group Doctors Against Forced Organ Harvesting also released a statement Feb. 7 saying there was "no evidence that past practices of forced organ harvesting have ended" in China.

"The lack of transparency about organ sources in China is a mask of deception," said Dr. Torsten Trey, DAFOH executive director, in the statement.

The summit painted a disturbing picture of illegal organ trafficking in which laborers and refugees are often exploited for their organs, which can be cheaply bought in countries including Pakistan, India and Egypt.

It also heard of a growing number of Syrian refugees targeted by traffickers in Lebanon, who sent them to Egypt to donate their organs for cash.

The pope was expected to meet summit delegates on Tuesday, but the audience did not go ahead amid speculation that the reaction against China's inclusion embarrassed the Vatican as it seeks to re-establish diplomatic relations with Beijing after more than 60 years.

Both the U.S. Congress and the European Parliament recently condemned organ harvesting in China amid widespread concerns that tissue is sourced from detained and executed prisoners.

Victims reportedly include death row prisoners and religious and ethnic minorities such as Uighurs, Tibetans and "underground" Christians.

Beijing issued its first regulation banning the trade of organs in 2007, but experts say trafficking appears to still be common as the country suffers a drastic shortage of donated body parts.

[Josephine McKenna has more than 30 years' experience in print, broadcast and interactive media. Based in Rome since 2007, she covered the resignation of Pope Benedict XVI and election of Pope Francis and canonizations of their predecessors. Now she covers all things Vatican for RNS.]