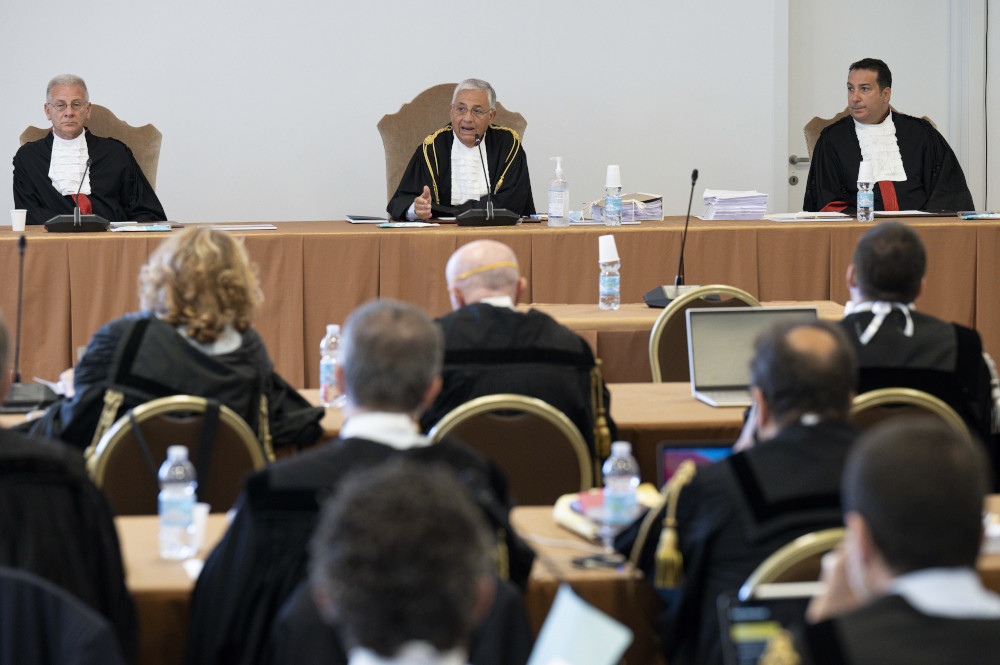 Prosecutors asked Vatican judges to revoke an order to give lawyers representing Cardinal Angelo Becciu video and audio depositions of their main witness.

In an eight-page document sent to the Vatican tribunal, prosecutors said the Vatican court's request that they release the depositions of Msgr. Alberto Perlasca, the former head of the Secretariat of State's administrative office, would cause "potential serious and irreparable damage to the rights of the persons who participated in the proceedings."

The document -- signed by chief prosecutor Gian Piero Milano and his deputy prosecutors, Alessandro Diddi and Gianluca Perone -- was published in its entirety on the Italian blog Il Sismografo Aug. 10.

In their argument, prosecutors cited Italian penal law, stating that Perlasca's depositions could not be shared without the consent of those present, including "interested parties, the lawyers and in one case, also an interpreter."

"In the Italian Code of Criminal Procedure, in order to protect the image of the persons who participate in the proceedings, it is stipulated that when photographic or audiovisual recording of the activities is authorized, it is always forbidden to record (even before dissemination) those who do not expressly consent," the Vatican prosecution said.

On July 27, during the first day of the Vatican trial involving alleged embezzlement, money laundering and abuse of office, lawyers representing the 10 defendants cited Italian law to argue against the court proceedings. At that time, prosecutors said Italian law did not apply.

Perlasca was initially seen as a possible suspect after Vatican police seized documents, computers and even floppy disks from his home and office in 2020.

The raid was part of the Vatican's investigation into how the Secretariat of State used $200 million to finance a property development project in London's posh Chelsea district, a project that incurred millions of dollars in debt.

According to the trial indictment, Perlasca requested to speak to investigators and provided them "with a precious contribution for the reconstruction of some central moments relating to the case of the London property," consequently turning him from suspect into star witness.

At the trial, lawyers for Becciu, the former prefect of the Congregation for Saints' Causes who is among the defendants, argued that they had yet to receive the full contents of Msgr. Perlasca's testimony.

Responding to the lawyer's argument, Diddi said there was "no problem" in handing over Perlasca's testimony. Vatican judges ordered the prosecution to provide video tapes of his testimony to defense lawyers by Aug. 10.

The prosecution's recent request represents an about-face from the initial willingness to share the video and audio of the depositions.

Becciu, who has filed lawsuits against several news agencies for libel and/or defamation, announced at the end of the trial's first day that he instructed his lawyers to file a similar lawsuit against Perlasca.

In a statement to Italian news agency Adnkronos, Becciu's lawyer, Fabio Viglione, said he was "surprised by the failure" to hand in the deposition, which he argued was "a cardinal principle of any jurisdictional assessment."

The Vatican court, he said, "has listened to all parties during cross-examination and has issued a measure that must be respected and executed in its entirety."