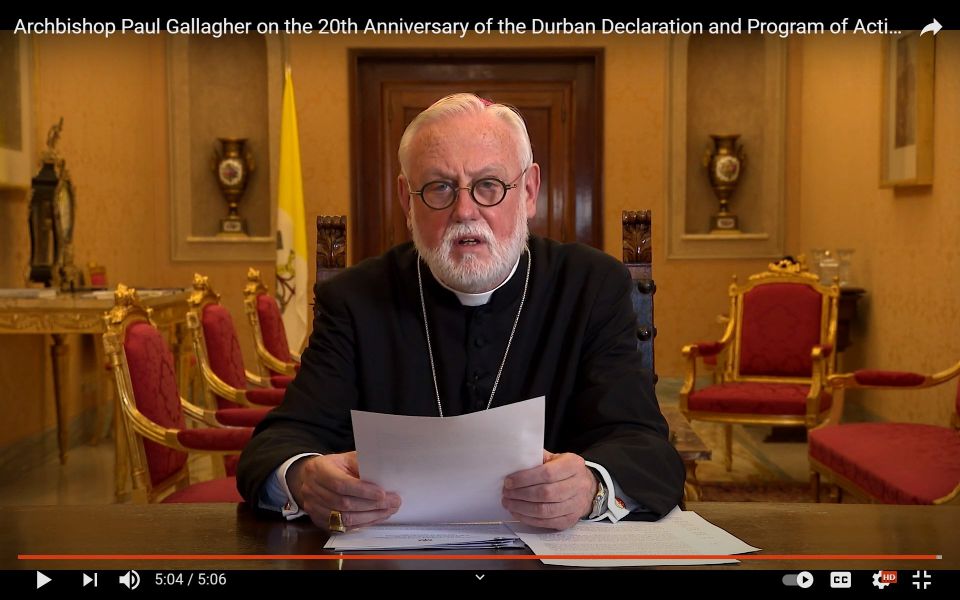 Addressing a high-level U.N. meeting Sept. 21, Archbishop Gallagher also said that violence against religious groups as well as prenatal diagnostics that lead to a denial of the right to life "because of disability, sex, or other traits" must not be ignored.

"Universal human rights are indivisible and interdependent and thus cannot exist in opposition. Laws and norms that seek to root out discrimination and intolerance must therefore respect the right to freedom of opinion, thought, religion and conscience," he said.

The high-level meeting marked the 20th anniversary of the Durban Declaration and Program of Action, a U.N. document that proposed concrete measures to combat racism, racial discrimination, xenophobia and related intolerance.

The Vatican's commitment to fight racism, Archbishop Gallagher said, is "rooted in the erroneous and evil claim that one human being has less dignity than another."

Citing Pope Francis' encyclical, "Fratelli Tutti, on Fraternity and Social Friendship," the Vatican foreign minister said racism regularly hides "beneath the surface only to keep reemerging" and that among those who are often subject to racial discrimination and abuse are migrants and refugees, particularly those of African descent.

"Racism can and must be defeated through a culture of encounter, fraternity and solidarity," he said.

While agreements and declarations like the Durban Declaration are "an important and necessary step," the archbishop said, they must lead to real change through government regulations, education and ethical media reporting that respects 'the dignity of all and do not foster a divisive 'us against them' mentality."

Archbishop Gallagher also denounced violence against religious groups and minorities and said the "disregard for the right to freedom of religion and belief leads to the violation of further human rights."

"Individuals and entire populations are discriminated against because of their faith while perpetrators often enjoy impunity," he said. "Some religious minorities in certain regions even face extinction, including Christians who represent the most persecuted group globally."

Furthermore, he denounced "the insidious practice of eugenics" as well as a mentality that "often lurks behind artificial procreation techniques" and denies countless human beings their right to life.

"Such a mindset entrenches principles of discrimination squarely opposed to the Durban Declaration and cannot be ignored," Archbishop Gallagher said.