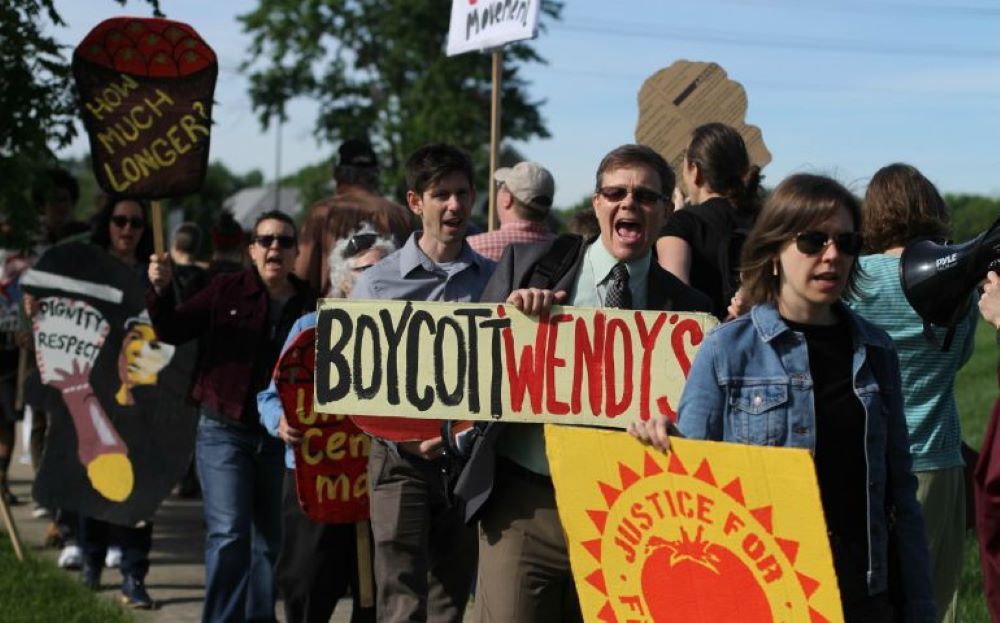 Allies protest outside Wendy's headquarters in the Columbus, Ohio, suburb of Dublin in this 2017 file photo. The Columbus diocese is among more than 150 organizations and faith leaders to boycott the fast food chain and advocate for fair food practices. (Courtesy of Alliance for Fair Food)

Editor's Note: After this story was published, NCR learned that the information about the Diocese of Columbus joining the boycott of Wendy's was made without authority from the diocese. "Although the Catholic Diocese of Columbus and Catholic teaching upholds the dignity of every individual, it does not endorse or support any specific programs or entities, including the Fair Food program," said a statement from diocesan chancellor, Deacon Thomas M. Berg Jr. NCR has changed the headline; the previously published story is below.

The Columbus diocese is among more than 150 Ohio organizations and faith leaders joining a boycott of the Wendy's fast food chain called by the Coalition of Immokalee Workers, urging CEO Todd A. Penegor to enroll in the Fair Food Program, a partnership among farmworkers, growers and buyers that advocates for a worker-driver model of social responsibility.

"Rooted in the sacredness and dignity of the human person, Catholic social teaching upholds the dignity of work and the fair treatment of people who do the work,” said Erin Cordle, associate director of the Columbus diocese's Office for Social Concerns, referencing the farm workers who labor to provide produce for Wendy's.

Cordle said the diocese wants Wendy's to join other industry leaders, such as fast food chains like McDonalds, Burger King and Subway, which have signed on to the Fair Food Program (FFP). The boycott calling for fast food chains to adopt fair food practices dates to 2005.

FFP, founded 10 years ago in Florida, allows for the Coalition of Immokalee Workers to lead educational workshops about labor standards for farmworkers during work hours at the farms where they work. The FFP also has a third-party council that conducts audits and investigates worksite complaints.

"By refusing to participate in the Fair Food Program, Wendy's has opted to profit from farm worker abuse and poverty and continues to provide a market for less reputable growers,” states a letter to CEO Penegor, organized by Ohio's Faith in Public Life and signed by 150 faith leaders who support the boycott.

Fr. Bob Bonnot, retired pastor of Christ Our Savior Parish in Struthers, Ohio, signed the letter. He believes the boycott offers an opportunity to alert Catholics in Ohio to labor injustices that might be occurring in their community or at the places they eat.

He said Catholics who do might not necessarily identify themselves as activists might see this boycott and think, "Yeah, I can do that. That's something that I can do as a follower of Jesus as somebody that stands with the Catholic teaching about justice."

"These workers — largely immigrants — are among the most exploited in our society. They deserve a living wage and decent working conditions, including safe workplaces that are free of sexual harassment," said Clayton Sinyai, executive director of Catholic Labor Network, a national association based in Washington, D.C.

"Our Catholic faith teaches that every worker deserves a living wage," Sinyai told NCR. "The Catholic Labor Network is proud of its work with the Coalition of Immokalee Workers and other farm labor organizations to promote justice for farm workers."

"The Fair Food Program is bringing us progress in that direction, and we are concerned that Wendy's is standing in the way," he added.

'These workers — largely immigrants — are among the most exploited in our society. … Our Catholic faith teaches that every worker deserves a living wage.'

In a Nov. 30 email to Faith in Public Life, a representative of Wendy's said the company is proud of its brand and its "commitment to deliver high quality, ethically sourced products" for its restaurants. "We have high expectations for ourselves and for others with whom we work, including with regards to quality, integrity, and human dignity," wrote Liliana Esposito, Wendy's chief corporate affairs and sustainability officer.

The response also outlined the ways in which Wendy's believes they are upholding fair and humane practices including "purchasing our North American tomato supply exclusively from indoor, hydroponic greenhouse farms."

"We have no reason to doubt that the Fair Food Program has helped improve conditions on outdoor tomato farms," the company wrote. "However, linking this work with the idea that joining this program, and purchasing field-grown, commodity tomatoes, is the only way that Wendy's can demonstrate responsibility in our supply chain is not true."

A representative of the Coalition of Immokalee Workers noted that this response was almost identical to a response Wendy’s gave earlier this year in a similar situation.

The coalition also noted that indoor work environments are not inherently better for farmworkers — especially during a pandemic.

"In sum, there is no good reason — other than its own intransigence — stopping Wendy's from joining the FFP and thereby becoming part of the only proven method of preventing human rights abuses in the U.S. agricultural industry," CIW said in response.

Added Sinyai of the Catholic Labor Network: "Corporations are designed to ensure profits for shareholders, not to preserve just working conditions for their employees. Only worker organizations such as labor unions and the Coalition of Immokalee Workers can effectively represent the interests of workers and guarantee fair labor standards. I have no confidence in the promises of for-profit corporations, however well-intended."