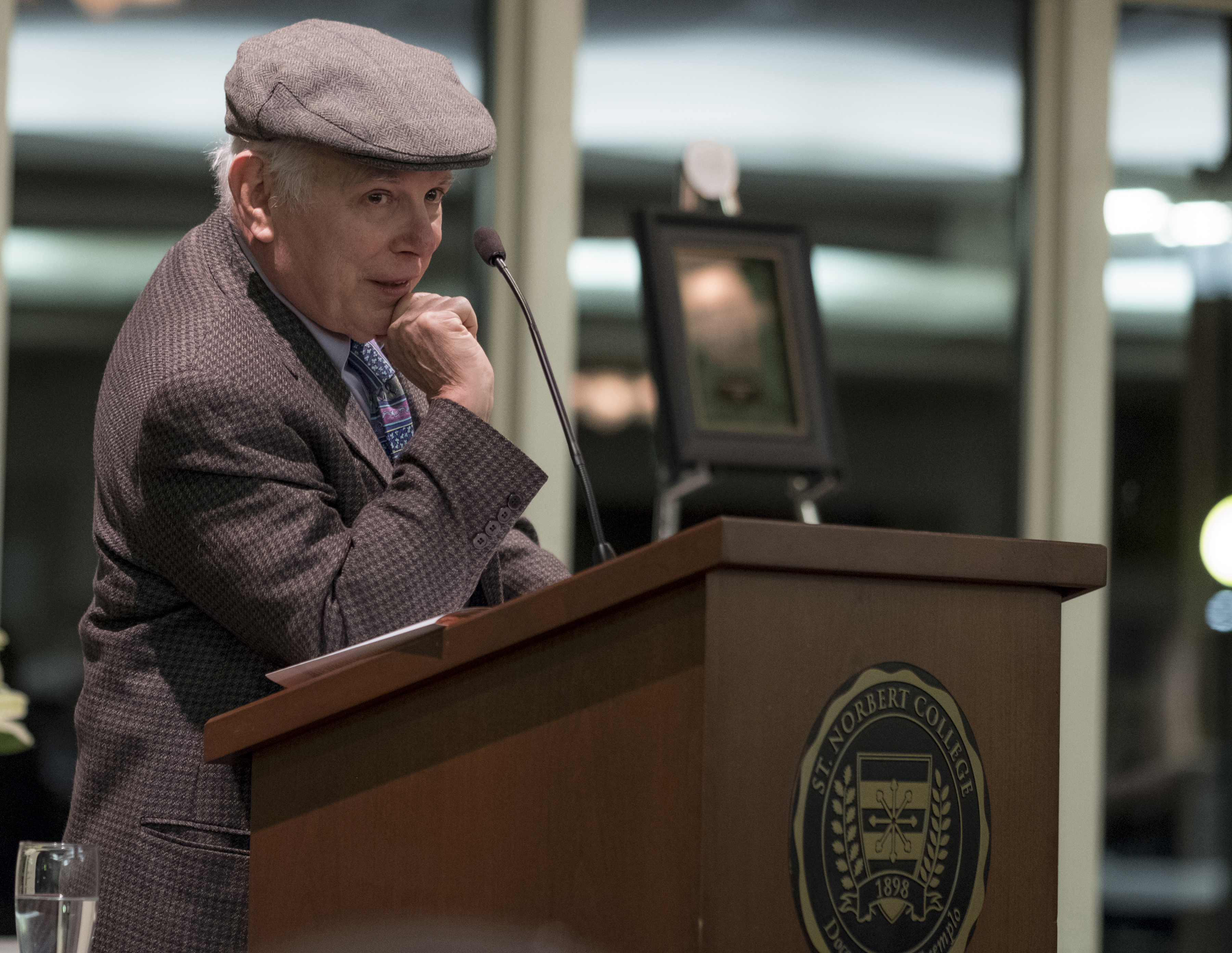 Harry Boyte, 72, is the 2018 winner of the St. Norbert Ambassador of Peace Award bestowed by St. Norbert College in De Pere, Wis. On campus to receive the honor Feb. 23, he gave a lecture on "Education as the Seedbed for a Democratic Renaissance." Boyte founded the Center for Democracy & Citizenship at the Humphrey School of Public Affairs at the University of Minnesota. Today the center is part of the Sabo Center for Democracy & Citizenship at Augsburg Collehe in Minneapolis. (CNS/Corey Wilson, courtesy St. Norbert College)

Harry Boyte sees democracy in crisis, but he's hopeful that's about to change.

He finds that American society and societies around the world are undergoing "an unraveling of the civic fabric" highlighted by acrimony and prejudice, a world in which people with differing opinions cannot converse, where places where those conversations might be held are disappearing.

However, "we are at the threshold of another stage around civic engagement," said the founder of an institute for the development of citizen-driven democracy and an acclaimed civic education/empowerment initiative for young people, he said.

His optimism is buoyed by actions such as the student-led protests to ban assault weapons following the shooting massacre at the high school in Parkland, Florida, that left 17 people dead.

"Young people hunger for hope, and they have a capacity for hope," Boyte recently told a lecture audience at St. Norbert College. "The question is, 'How can those be more than protests? How can we take that developing energy and shape it into deep change?'"

Boyte, 72, was on the De Pere campus Feb. 23 to receive the St. Norbert Ambassador of Peace Award, given annually to an individual who has been an influential advocate for sustainable peace.

Like the school namesake Norbert of Xanten, the award winner is someone who advocates and demonstrates respect for persons, promotion of dialogue, nonviolent conflict resolution, reconciliation and forgiveness. St. Norbert's president, Brian J. Bruess, presented the award to Boyte.

In 1990, he introduced a program called public achievement at St. Bernard, an inner-city Catholic elementary school in St. Paul, Minnesota.

With coaching from University of Minnesota students, St. Bernard grade schoolers formed teams to work on projects of their choosing, identified obstacles, contacted civic and community leaders to gather support and brought their projects to those in power.

The students' effectiveness in getting a zoning change so an empty lot could be turned into a playground, among other successes, was among the reasons that Public Achievement has spread -- not just in the United States, but to 33 countries. It is part of teacher-education programs at a dozen colleges.

In his lecture, titled "Education as the Seedbed for a Democratic Renaissance," Boyte returned the compliment, noting that the school's "never-more-needed" Norman Miller Center "positions St. Norbert to be at the leading edge of the democratic renaissance."

Democracy is the work of people and institutions, something all have a responsibility for, he said, and it is deeply connected with Catholic social teaching, which he learned during key experiences working with the College of St. Catherine in St. Paul and St. Bernard Grade School there.

He spoke at length about "public work," which he explained is an activity that benefits more than one's self, that has a benefit to one's community.

Boyte pointed out that the concepts of public achievement aren't just for young people and not just for schools. City governments are using the Public Achievement model to address civic challenges. The program's tools have been adapted for use in social work, and there's now a group in a prison using Public Achievement to work on issues surrounding domestic violence.

To achieve change, people must find those who are not on their side and have a conversation with them, find out what they want and build alliances, he added. "Attacking them is not going to win them over."

Boyte used the term "public love," which has nothing to do with sexuality but is the acknowledgement that all people have some value.

"You don't have to like people -- you can even dislike them -- but you can still believe they have the capacity to contribute to the human condition," he said.

"Begin by recognizing that discussions of purpose are really important," Boyte advised. "Break the silence. Ask what is our purpose, what are the obstacles and how can our purpose be strengthened."

Boyte said he admires the principles of Catholic social teaching that are found in papal encyclicals and has a high regard for Pope Francis for "his commitment and capacity to draw on these."

He echoed Francis, encouraging people to become, in the pope's words, "artisans of the common good," "to build a 'we,' not simply an 'I,'" Boyte said.

He added, "We're talking about moving the world from where it is to what we want it to be."