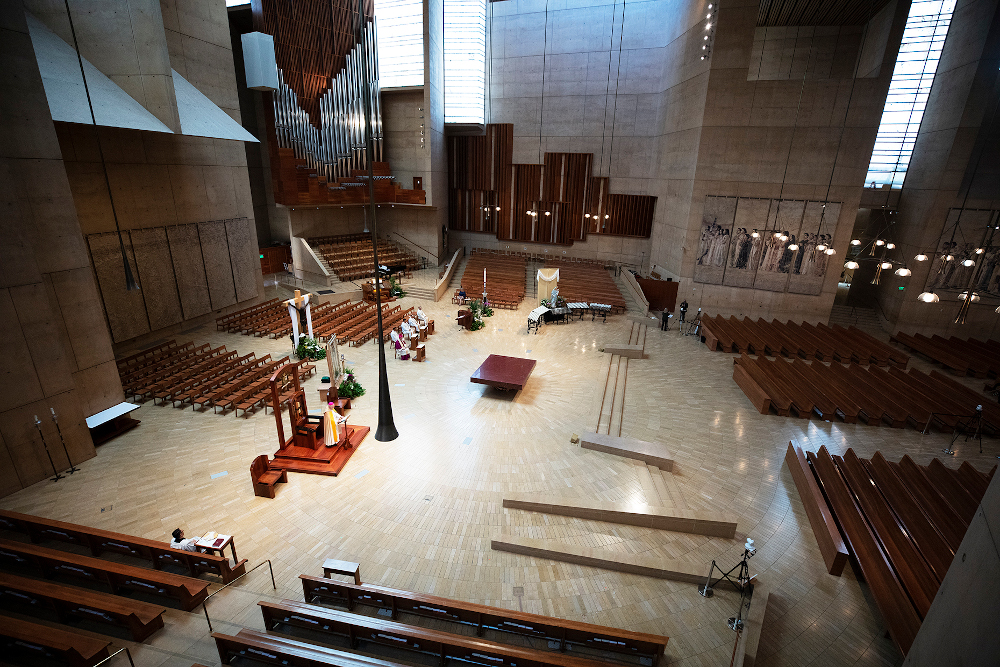 Archbishop Jose H. Gomez of Los Angeles, president of the U.S. Conference of Catholic Bishops, leads a special liturgy in renewing the consecration of the U.S. to the care of our Blessed Mother May 1, 2020, from the Cathedral of Our Lady of the Angels in Los Angeles. (CNS/Angelus News/Victor Aleman)

After being closed for more than two months due to the COVID-19 pandemic, churches in the Archdiocese of Los Angeles can begin to open to the public the first week of June if they implement certain safety guidelines, Archbishop Jose H. Gomez told priests and parish staff late May 26.

He made the announcement in an email and included guidelines for a phased plan that allows for parishes to open for personal prayer once their individual, written safety plans are approved by the regional auxiliary bishop.

As part of the second phase, parishes with approved safety plans will be allowed to offer daily Mass to the public as soon as June 3, provided they adhere to strict sanitary and social-distancing measures.

The earliest date churches could have Sunday Mass while adhering to those measures would be June 7, the feast of the Most Holy Trinity.

The announcement came on the same day that Los Angeles County announced that "faith-based organizations" could resume services, "with the number of congregants limited to less than 25% of the building's capacity, or a maximum of 100 people, whichever is lower."

A day earlier, California Gov. Gavin Newsom said churches in the state could reopen under the same restrictions on a county-by-county basis, as the declining number of daily deaths and hospitalizations suggested the state had "bent the curve" of the pandemic.

In his letter to pastors, administrators and business managers of parishes in the archdiocese, Gomez warned that "the coronavirus is still out there, it is still contagious, and it is still dangerous."

"So, we need to proceed with prudence and caution and concern to protect our most vulnerable parishioners," he said.

Under Step One of the reopening guidelines, parishes are required to implement a series of sanitary measures, including undergoing a "deep cleaning" and making cleaning materials available to "disinfect points of contact after each visitor departs." Missalette and hymnal books should be removed, holy water fonts emptied, and "frequently touched objects" such as statues should be cordoned off.

"The Blessed Sacrament may be exposed for silent adoration by the faithful, but no benediction or other organized/communal prayer should take place," during Step One, the guidelines state. In addition, livestreamed Masses will remain available during this phase and faithful in COVID-19 "vulnerable categories" should stay home.

Individual confessions also can be heard during the initial phase, with priest and penitent separated by at least six feet, wearing face coverings, and wiping down any surfaces touched.

The plan allows for parishes to move into Step Two as early as June 3, under which daily Mass can be celebrated with social-distancing measures. During Mass, Communion will be offered only in the form of bread and in the hand, and with priests sanitizing their hands before and after distributing Communion.

For any gathering during Step Two, choirs are to be replaced with a cantor and accompanist, and people should be dismissed after Mass by groups of pews.

Scheduled confessions, the guidelines stated, can be held with the same precautions as Step One in areas outside the church, such as classrooms or meeting rooms.

In addition, "the celebration of the sacraments of initiation (baptism, confirmation and Eucharist) for adults and children who had been preparing for the Easter sacraments but have gone without reception into the church due to the pandemic, as well as for infants, can continue in limited numbers," under Step Two, as well as religious celebrations for families, like weddings, funerals and "quinceaneras," which celebrate Latino girls turning 15.

The archdiocese's guidelines resemble much of what a blue-ribbon panel of Catholic doctors from around the U.S. recommended earlier this month in a proposed "road map" to resuming the sacramental life of Catholic parishes in the U.S.

Catholics in the archdiocese, which is comprised of Los Angeles, Ventura and Santa Barbara counties, will remain dispensed from the Sunday obligation to attend Mass during both phases of the reopening plan.

The guidelines mention but do not require additional measures that parishes can take if they deem appropriate, such as donation baskets near doors to receive donations safely, systems to count and manage Mass attendance, and scheduling a separate Mass for vulnerable parishioners.