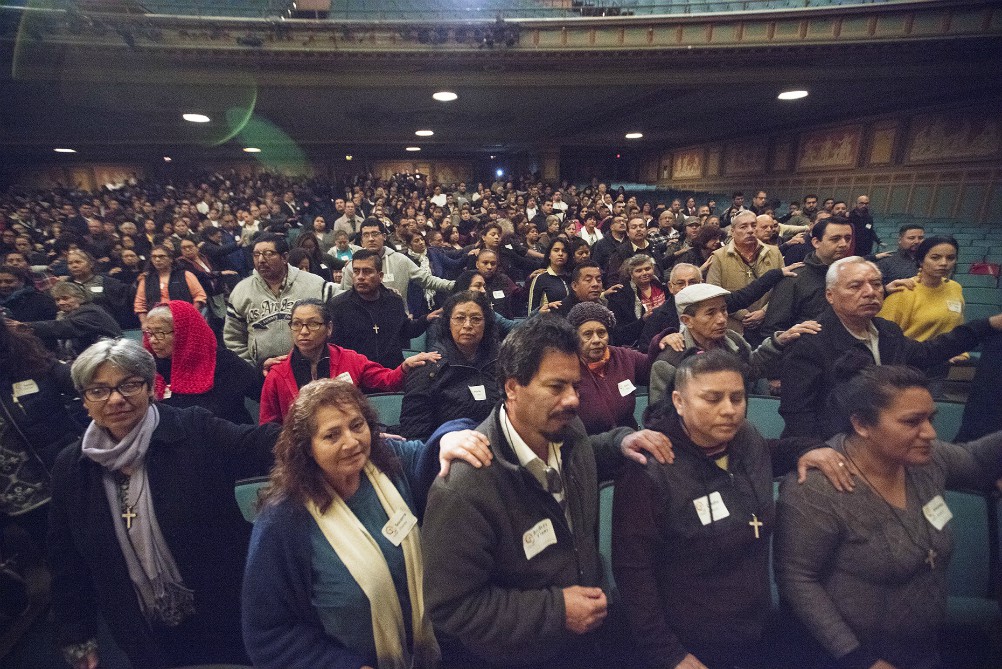 Festive moments and open dialogue mixed with concrete goal setting and strong calls to embrace those in need marked the Los Angeles Archdiocese's V Encuentro — a day-long gathering Jan. 27 of Hispanic leaders in the nation's largest and most concentrated population of Latino Catholics.

Pope Francis' Latin roots and his repeated exhortations to reach out to persons on the peripheries of society were underscored repeatedly in small-group sessions, keynote addresses, the welcome by Archbishop José Gomez, and interviews by NCR.

Also undergirding much conversation and deliberation was the conviction that Catholics of Hispanic heritage — soon to comprise the majority of U.S. Catholics — should imminently assume increased church leadership roles.

"Never forget," Gomez told the 1,200 participants at Pasadena's Convention Center, that "the first Catholics in this country were Latino." (Read his full reflection here.)

"We are not new-comers or late-comers or outliers," he exclaimed to sustained applause.

"My brothers and sisters," he added, "as Latinos we are called to be the leaders of our church."

"It is the Latino moment," the archbishop told NCR, pointing to the vast and growing population of Latino Catholics, not only in his archdiocese, the most populous in the country, but across the U.S. 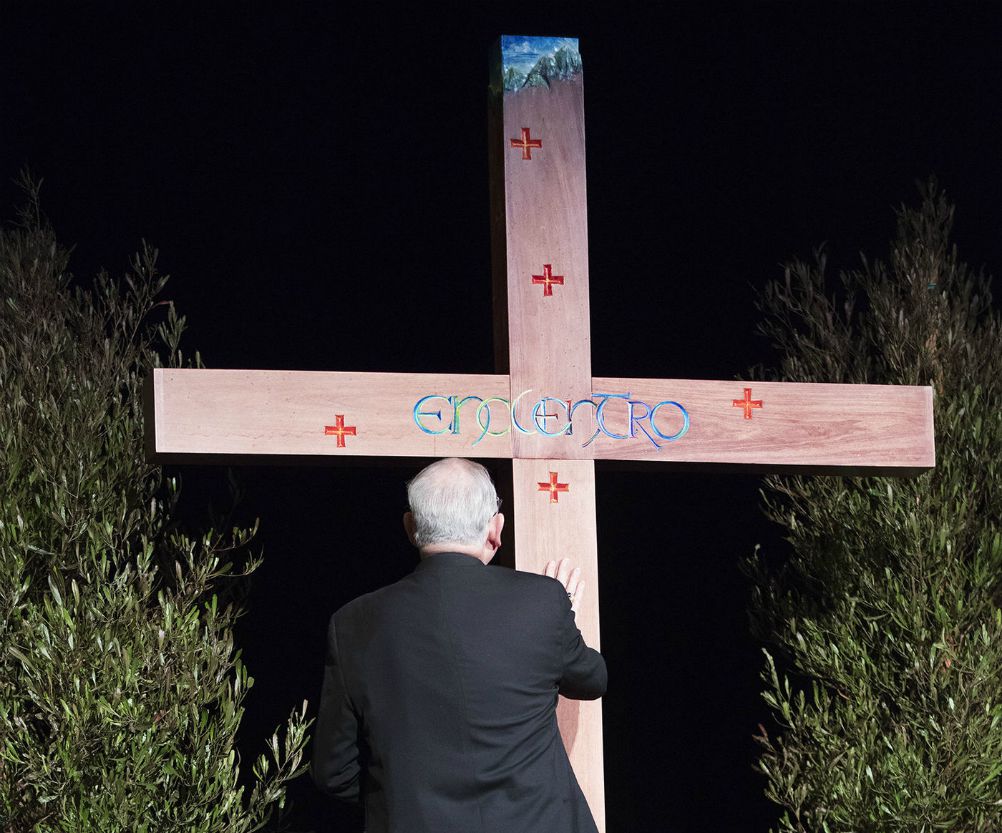 Los Angeles Archbishop Jose Gomez touches a cross on the stage of a general session of the Jan. 27 Los Angeles Archdiocese's V Encuentro held at the Pasadena Convention Center. He said the cross was a replica of "La Cruz de Encuentros" that he presented to Pope Francis during the pope's visit to the United States two years ago. (Angelus News/Victor Aleman)

The three-county Los Angeles Archdiocese is home to some 5 million Catholics, 70 percent of whom are of Latino/Hispanic lineage, archdiocesan officials said.

Asked if the church is challenged on how to harness the energy, intelligence and capabilities of the Hispanic Catholic community, Gomez told NCR that parish and other church structures are in place to accept Hispanic leaders.

"The Latino community is more stable now" and "needs to activate" its members, he said, adding that events such as the V Encuentro being carried out across the country can be catalysts.

He himself, he told participants, had been inspired by previous encuentros, which date to the 1970s.

In two break-out sessions, one in the morning and one in the afternoon, small groups around tables deliberated over 10 pastoral areas that had surfaced during parish-level gatherings in months that preceded the archdiocesan event.

Jan. 27 participants were asked to suggest three or four as priorities along with concrete action plans to address them.

Top concerns will be tallied in coming days, action plans summarized, and the results ultimately presented to the archbishop as potential platforms for archdiocesan pastoral planning, according to Ernesto Vega, archdiocesan coordinator for Adult Faith Formation in Spanish, who served as the event's chair.

While the priorities were not officially available then, Vega told NCR that issues dominating table conversations included youth and young adults, addressing the immigration crisis, marriage and technology.

"Forming leaders with the hearts of disciples was certainly one of the strongest pieces coming out," Vega said.

"This is not same as, 'Let me teach you the Bible or the Catholic faith or history, then memorize and then repeat it to me,' " Vega explained. "That is fading. This is not only about knowing, but in your heart having an attitude of conversion and following Christ … listening to the Lord, responding to him, being humble … being a person who builds bridges, not divides."

The Los Angeles gathering was one of about 160 diocesan-level encuentros that will have been held across the country.

It will send a delegation along with other dioceses of the U.S. bishops' Region 11 (California, Hawaii, Nevada) to Visalia, California, on April 27 for the regional V Encuentro.

The national V Encuentro Sept. 20-23 in Grapevine, Texas, will cap the U.S bishops-sponsored five-year process and be followed by a summary document.

According to archdiocesan officials, nearly 90 of the archdiocese's 287 parishes took part in grass-roots consultation; 78 were represented at the Pasadena gathering along with 38 ministries. More than 3,000 individuals took part in the parish consultations.

NCR talks to Los Angeles Archdiocese's V Encuentro participants about their hopes for the encuentro process.

Los Angeles County and California have the largest Latino population of any county or state, reports the U.S. Census.  In 2014 Latinos for the first time outnumbered non-Hispanic whites in California.

"Inexorably, we are reaching a moment in our church history in the United States where we will move to a significant inclusion of Latino" influence on church governance and direction, Jesuit Fr. Allan Figueroa Deck, the morning keynote speaker, told NCR.

"Latinos will be strong bridge builders," the well-known theologian and expert on Hispanic affairs added. "They have a foot in different worlds."

The "core theme" of his keynote, "Reach Out," said Deck, "is that discipleship means having a real relationship with God. … The V Encuentro is a call to focus on the reality and quality of our relationship with Christ which is nurtured by the habit of daily prayer."

Echoing discussion group conversations, Deck said he was somewhat concerned that the majority of Pasadena Encuentro participants appeared to be in the 40 to 65 age group.

The church must "confront youth and young adult issues," said Deck, who is Distinguished Scholar of Theology and Latino Studies at Los Angeles' Loyola Marymount University and rector of the LMU Jesuit community.

He is also founder of the Loyola Institute for Spirituality in Orange, California and co-founder and first president of the Academy of Catholic Hispanic Theologians of the United States.

NCR talks to Los Angeles Archdiocese's V Encuentro participants about what they would say to Pope Francis if they could speak to him.

Young persons at the event resonated. For example, Desiree Ilene Ramirez, a youth volunteer, said she hopes "to find a way to get through the social media and digital technology" that occupy such a dominate part of youths' attention and help them seek more faith-centered lives.

"The L.A. participants are key because Los Angeles is by far the largest Latino archdiocese in the country," Deck said. "The diversity of L.A.'s Hispanic/Latino communities provides a special opportunity to model intercultural sensitivity among the diverse Hispanic/Latinos themselves."

The first executive director of the U.S. bishops' Secretariat of Cultural Diversity in the Church, Deck pointed out that persons from every Central and South American nation reside in the Los Angeles metropolitan area, which has an estimated population nearing 20 million.

Deck said the Buenos Aires-born Pope Francis "models a form of leadership with strong roots in Latin America, one that resonates with L.A.'s Hispanic/Latino communities."

Another LMU theology professor, Cecilia González-Andrieu, urged participants in the afternoon keynote reflection to follow Jesus' example and "push into new and wider orbits" of accompaniment and ministry "to concretize Pope Francis' call to go out to the peripheries."

Starting with Adam and Eve's break with God, she said, "The stories of the Old Testament continue the story of humanity trying to regain a relationship with God, but not so much as through being better with each other, but by trying to bribe God through piety and tributes."

Christ's birth took place "in the smallest orbit of all," a manger among the "poor and rejected," González-Andrieu said, adding that Jesus' incarnation served to "show us unconditional love and how to walk once again with God."

"Our ministry of accompaniment must begin here, Jesus at the center of our very existence … the axis for our lives," the theologian said.

She exhorted the audience to become "fearless" and "humble" leaders in "active accompaniment that moves beyond telling our youth, " 'God loves you, and I am praying for you.' It begins there, but moves into the orbit of action to challenge oppressive systems, economic disparities, what hurts the most vulnerable."

Both keynotes were delivered in Spanish, and the general sessions were staged in a combination of English and Spanish.

In an email, Ken Johnson-Mondragón, director of the research at the national V Encuentro office, said the bishops' organization "offered a few different models for doing the diocesan encuentro."

"In one model, attendance and participation was restricted to a select number of delegates sent from each parish that participated in the grassroots process," he explained. That was the basic approach used in the Los Angeles Archdiocese.

"In contrast," Johnson-Mondragón continued, "the Diocese of Little Rock used the model that welcomed everyone who wanted to come, so they had 2,250 participants. This should not be taken to mean that" Little Rock "reached more people than" Newark, Los Angeles or other dioceses, he added.