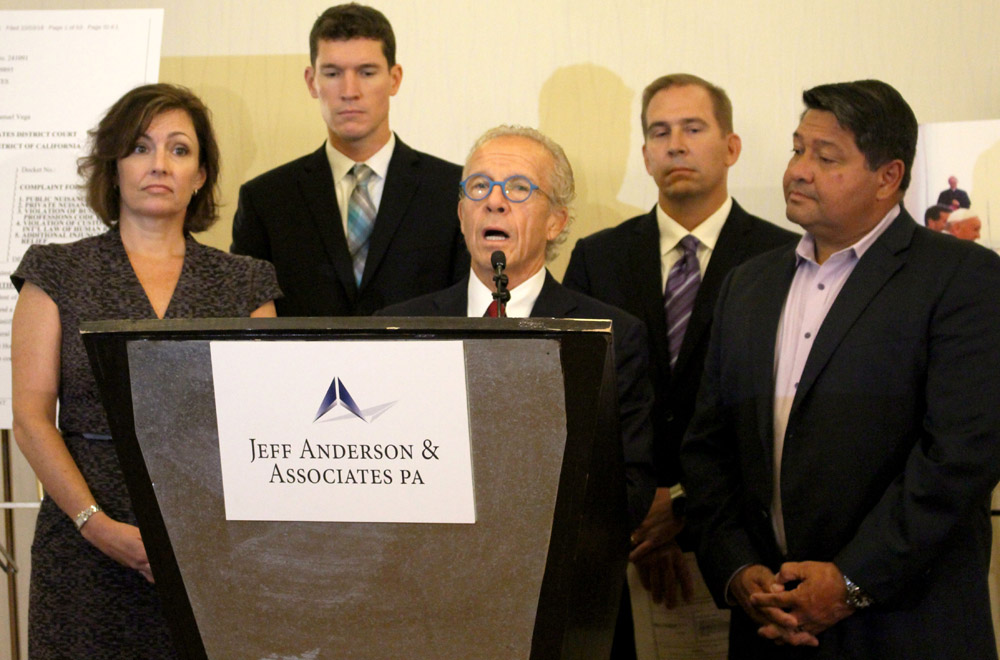 Jeff Anderson & Associates is trying again to sue the Vatican for covering up child sexual abuse and is seeking the release of names and files for more than 3,400 perpetrators.

"As it [legal system] starts to open the doors for survivors in ways it hasn't," Jeff Anderson said at a press conference Oct. 4 in downtown Los Angeles. "We're going to kick open the doors that have been shut when it comes to the Vatican."

Anderson & Associates have sued the Vatican multiple times before but no lawsuit has been successful. The most recent lawsuit against the Vatican was dismissed in federal court in Oregon in 2013.

Anderson & Associates aren't the only ones looking to hold the Vatican accountable. There's a long history of lawsuits against the Vatican and even the pope.

In 2005, a judge in Texas ruled Pope Benedict XVI could not be sued for conspiracy to cover up the sexual abuse of minors because the pontiff has immunity as a head of state, according the Associated Press.

In 2011, legal advocacy group the Center for Constitutional Rights filed a complaint on behalf of the Survivors Network of those Abused by Priests at the International Criminal Court against Pope Benedict XVI. But according to reporting by National Catholic Reporter, the prosecutor opted not to pursue the case because it did not satisfy several preconditions necessary for examination, including issues with "temporal jurisdiction" and "subject-matter jurisdiction."

Vatican spokesman Jesuit Fr. Federico Lombardi said at the time that he "never doubted this would be the response [of the ICC], given the total groundlessness of the accusation," according to Religion News Service.

There have also been cases in Kentucky and Wisconsin.

Some are critical of Anderson and his continued attempts to sue the Vatican.

"Anderson has sued the Vatican many times, and has never won," Bill Donohue, president of the Catholic League for Religious and Civil Rights, told CNN in 2010. "He knows he will lose again this time, but that means nothing to him. What this is all about is grandstanding: getting more PR for himself and throwing more mud at the Catholic Church."

Jeff Anderson & Associates, a Minnesota-based law firm, has sued thousands of Catholic priests, bishops and dioceses over the past 35 years. In 2010, AP reported that Anderson claimed to have no idea how much he has won in settlements but that in 2002 he estimated it was around $60 million.

"Legally this is something nobody dared do before."
—Jeff Anderson

But Anderson said it's this type of legal experience that is needed when taking on the Vatican.

He said nobody has tried suing in this way before, adding that instead of negligence they are suing for public nuisance, private nuisance, violation of business and professions code 17200, and violation of customary international law of human rights.

"Legally this is something nobody dared do before," he said, adding that it's something that has been coming for a long time. "I just didn't know when the universe would align in a way that it has."

"They're making promises, pledges, which are really appeasing people to thinking they are doing something," he said.

But, Anderson added, that's not enough.

That's why Manuel Vega has filed the lawsuit against the Vatican. 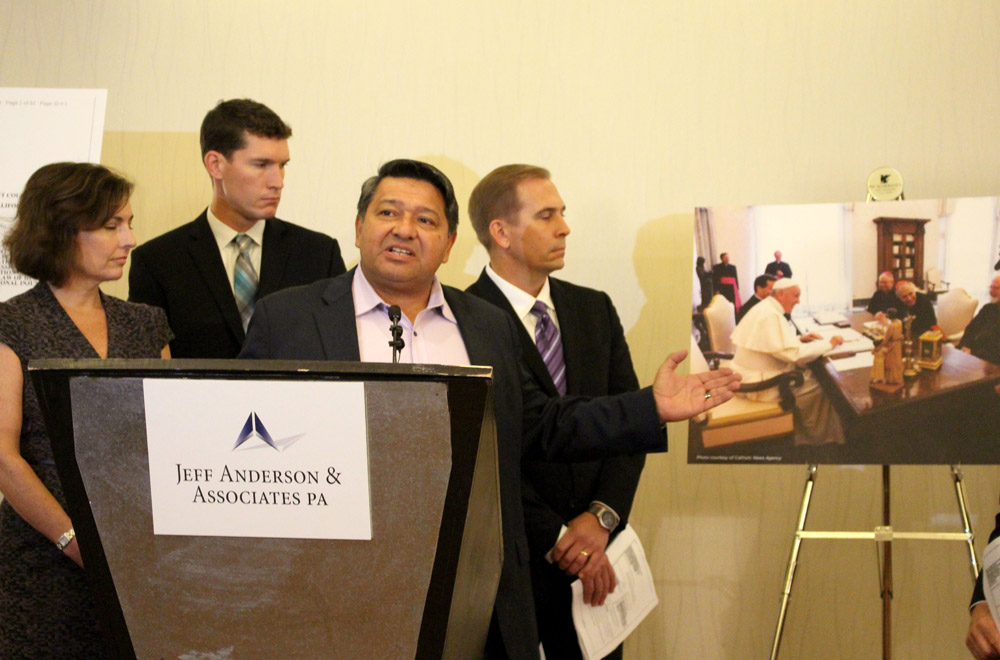 Abuse survivor Manuel Vega, at podium, talks about why he and Jeff Anderson & Associates have sued the Vatican during a press conference Oct. 4 in Los Angeles. (Heather Adams)

Vega, now 52, reached a settlement in 2007 with the Archdiocese of Los Angeles over abuse that happened when he was 10-years-old. But he knows child sexual abuse in the Catholic Church reaches much further than his case and wants to hold the Vatican accountable.

Anderson said there is an extreme emotional toll on survivors when taking on the Vatican like this. The last lawsuit took 10 years. Anderson said that's why it has to be a particular person and Vega is that person.

"I'm seeking the truth. That's what this is all about," Vega said. "There needs to be accountability."

In 2001, the Vatican ordered dioceses around the world to send all their cases to Rome to be reviewed. Despite advocates and victims demanding the Vatican release these files about abusive priests for years, the Vatican has refused.

If the lawsuit is successful, the Vatican will be forced to release the files. But, Finnegan said, nothing is preventing those files from being released today.

Some have been worried about the political implications of a lawsuit like this. The Holy See and the pope are crucial in many diplomatic roles, including recently being heavily involved in U.S. and Cuba relations.

Anderson thinks this lawsuit won't hinder those relations, and will actually help the church.

"To protect kids doesn't keep him [Francis] and all those clerics across the globe from doing their good work," Anderson said. "In fact it makes them better."

[Heather Adams is a freelance writer based in Los Angeles.]