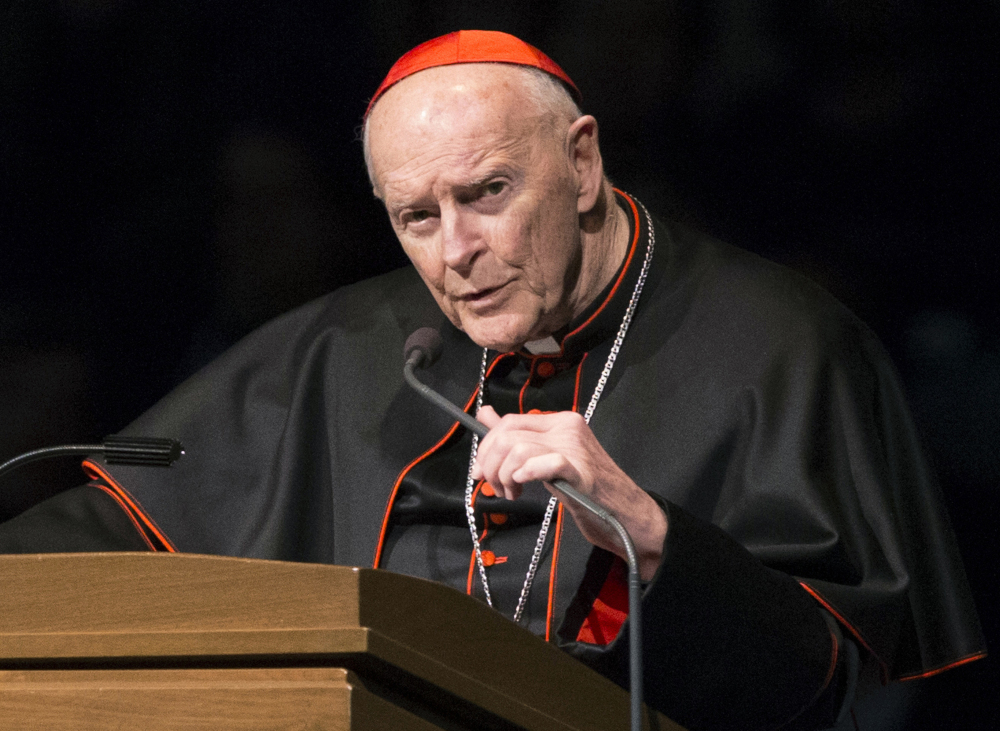 In this March 4, 2015, file photo, Cardinal Theodore McCarrick speaks during a memorial service in South Bend, Ind. James Grein alleged Thursday. Dec. 5, 2019 in a lawsuit filed under a recently enacted New Jersey law that he told Pope John Paul II in 1988 about being sexually abused as a child by the priest who would become Cardinal Theodore McCarrick but that the Vatican did nothing — claims he also made in a lawsuit this summer in New York. (South Bend Tribune/AP file photo/Robert Franklin)

Editor's note: This story has been updated with a comment from the Archdiocese of Newark and to correct Theodore McCarrick's career path.

A man claims in a lawsuit filed under a recently enacted New Jersey law that he told Pope John Paul II in 1988 about being sexually abused as a child by the priest who would become Cardinal Theodore McCarrick but that the Vatican did nothing — claims he also made in a lawsuit this summer in New York.

James Grein alleged Dec. 5 that McCarrick, a family friend, abused him for two decades starting when he was 11 in the late 1960s when McCarrick was serving in New Jersey. Some of the abuse allegedly occurred on trips he took with McCarrick to other U.S. states and to the Vatican.

On a trip to Rome, Grein alleges, he waited until McCarrick was out of the room to tell the pope — in the presence of other Vatican officials — about the abuse. The Vatican took no action, Grein says.

McCarrick, who is in late 80s, was defrocked in February after a church investigation concluded he had committed acts against children and adults.

The suit names the Diocese of Metuchen and the Archdiocese of Newark as defendants, alleging gross negligence. It also accuses McCarrick of assault, battery and infliction of emotional distress, and seeks unspecified damages.

Barry Coburn, an attorney for McCarrick, said in an email Dec. 5 that he would be unable to comment until he learned more about the case. In the past, McCarrick has denied Grein's allegations.

The New York lawsuit, filed in August, named the Archdiocese of New York but not McCarrick directly.

Attorney Mitchell Garabedian said Dec. 5 he was seeking to add the Vatican as a defendant. The Vatican had no immediate comment, but the current pope, Francis, has urged abuse victims to come forward and said abusive clerics should turn themselves in.

Grein alleges he was abused at least two more times in New Jersey after, as an adult, he notified the pope.

McCarrick was a family friend who performed his first baptism on Grein and, Grein said, later groomed him for abuse.

"I was introduced as ‘his special nephew' to presidents and heads of state, to the pope, bishops, cardinals and the rich and famous, and to other predators across the world as his 'special boy,'" Grein said. "The word special was a signal that I am groomed. How sad is that?"

McCarrick is the highest-ranking figure in the Roman Catholic Church and the first cardinal to be punished by dismissal from the clerical state.

McCarrick, once the archbishop of Washington, D.C., served as a the first bishop of the Diocese of Metuchen and as archbishop of Newark from the late 1980s through 2000.